Peter Wainwright: One of the Great Connoisseurs of the Collecting World

The story behind the man who assembled the finest collection of historic firearms & militaria in American history.

Peter Stuyvesant Wainwright was born in New York City in 1925. His family owned an antique store in New York City and a farm in the wetlands of Long Island, which promoted his interest in hunting shooting and firearms from an early age. He started collecting firearms as a boy, about 1932, and has continued right up to the present.

Wainwright attended the Los Alamos Boys School in New Mexico until it was taken over by the Manhattan project for the development of the Atom Bomb in 1941. He grew to love the climate, open spaces and freedom of the American Southwest during his years there as a student.

With the outbreak of WWII, he enlisted in the US Merchant Marine at 17 years of age and rose to the rank of Midshipman. During the war he delivered supplies to the Allies in the Pacific, Indian Ocean, Mediterranean and France for Operation Overlord, arriving at Utah Beach on June 8, 1944 in support of the Normandy invasion.

After the war, as with so many other young men who put their lives on hold to defend this country and the rest of the free world, he returned to college, graduating with a BA and MA from Columbia University in New York, with majors in political science and history. During his graduate school years, he taught history to high school students in New York City.

Upon graduation he married Gerri Jordan, a Dutch citizen and refugee from the Japanese occupation of the Dutch East Indies. They were married for 61 years until her passing in 2015. The family moved from the East Coast to New Mexico in 1956. The couple had three sons and a daughter, Peter Jr., Daniel, Louise and Jonathan. Peter Sr.’s love of firearms, shooting and hunting was passed to the next generation.

Wainwright’s business and professional career included a time as Branch Manager of the EF Hutton brokerage office in Albuquerque, then Phoenix. In his later career he leveraged his position as Major in the Maricopa County Sheriff’s Reserves, where he ran that program, to assuming the position of Chief of Police in the Town of Paradise Valley, Arizona. Upon retirement he and Gerri settled in the home they built in Flagstaff, Arizona.

Always an active competitive shooter and avid collector of (especially antique) firearms, Wainwright amassed a collection of over 300 pieces with a special on American military arms as well as European items ranging from fine shotguns and dueling sets to matchlocks. His focus was quality over quantity with the result that items from the collection have been on exhibit at numerous museums and displays, including the Cody Museum. Wainwright has been an active member of the American Society of Arms Collectors for over 20 years and has provided numerous exhibits and lectures on his specialties at their meetings. For the last 25 years he has been conducting firearms safety classes and merit badge qualifications for the Boy Scouts of America at the gallery he built in the basement of his home in Flagstaff. Graduates of his training have gone on to serve in the US military, US service academies and Special Operations.

Relatives of Wainwright include Peter Stuyvesant who was the last Dutch Governor of New Amsterdam prior to it becoming New York. Another relative was his cousin Jonathan Mayhew Wainwright who became a four-star General and winner of the Congressional Medal of Honor for his service during WWII. Jonathan Wainwright assumed command of US and Allied forces in the Philippines from Douglas MacArthur in the early dark days of the war. Peter has given numerous lectures on General Wainwright’s career to veterans’ and historical groups, as well as participating in a number of dedications to Jonathan Wainwright’s service, including the Veterans’ Hospital in Walla Walla, Washington.

Another relative was JM Wainwright, Peter’s great-grandfather’s brother. JM was the commander of the Union paddlewheeler, the Harriet Lane, and was killed during the Civil War Battle of Galveston Bay. Peter Wainwright has carried on JM Wainwright’s trademark “mutton chop” whiskers in his honor for the last 20 years. Historical artifacts with a connection to General and Commander Wainwright were of great interest to Peter. 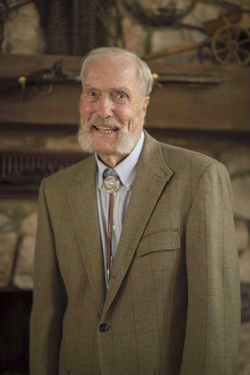