The quarter plate daguerreotype is believed to be the earliest image of enslaved African Americans with cotton.

“We were privileged to sell this historic record of antebellum American history,” said Wes Cowan, Cowan’s vice chair and principal auctioneer. “Clearly, this was one of the most important daguerreotypes we’ve ever sold and as an auction house that regularly sells important historical photography, I don’t say that lightly.” 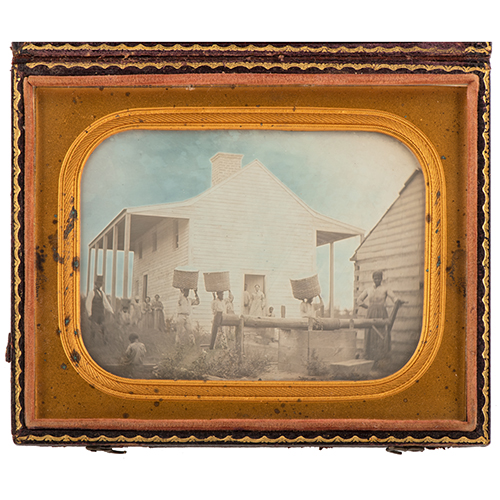 The daguerreotype was purchased by the Hall Family Foundation on behalf of the Nelson-Atkins Museum of Art in Kansas City, Missouri. The lot opened with an absentee bid at the starting price of $50,000 before a representative of the Nelson-Atkins Museum and two other phone bidders took over the action. After several minutes of back-and-forth bidding, the foundation emerged as the winning bidder when the hammer fell at $260,000. The inclusion of a 25% buyer’s premium resulted in a final sales price of $324,500. The photograph had been estimated to sell for $100,000 to $150,000.

“This daguerreotype makes a major contribution to the larger story of both American history and American photography, and is a significant addition to our daguerreotype holdings, an emphasis, dating back to 1995, in which we take considerable pride,” said Keith F. Davis, the senior curator of photography at the Nelson-Atkins Museum.

The daguerreotype is believed to depict the rural Greene County, Georgia plantation of Samuel T. Gentry (1798-1873). While other Gentrys lived in Georgia at the time this image was taken, Federal Slave Schedules from 1850 and 1860 indicate a mere handful were slave holders, and only one — Samuel  T. Gentry — owned at least 10 slaves, the number depicted in this daguerreotype.

The vast majority of known images of enslaved African Americans come from images taken by photographers who accompanied the Union Army in Coastal Georgia and the Carolinas. In these plantations, hundreds of slaves were owned by a small class of planter elites, providing their families with access to luxuries only dreamed of by the vast majority of Georgians. While this is the vision most Americans have of the antebellum south, the Gentry daguerreotype depicts a different reality.

Samuel Gentry was no mere yeoman farmer, but neither was he a member of the upper stratum of the planter class. Between 1850 and 1860, he owned between 15 and 18 slaves, which would have been slightly more than the average Georgia slaveowner at the time. Most plantations worked by slaves at the time looked more like Gentry’s humble homestead than the large coastal plantations most often depicted in history, making this a rare look at the pervasiveness of slavery.

The Gentry daguerreotype was the top lot of Cowan’s $1.1 million American History auction Auction held on November 15 in Cowan’s Cincinnati salesroom. There was significant interest across a spectrum of categories, most notably early photography of Native Americans, which saw four lots top $30,000. Full results from the auction can be viewed here.