2007, Historic Firearms and Early Militaria, May 2 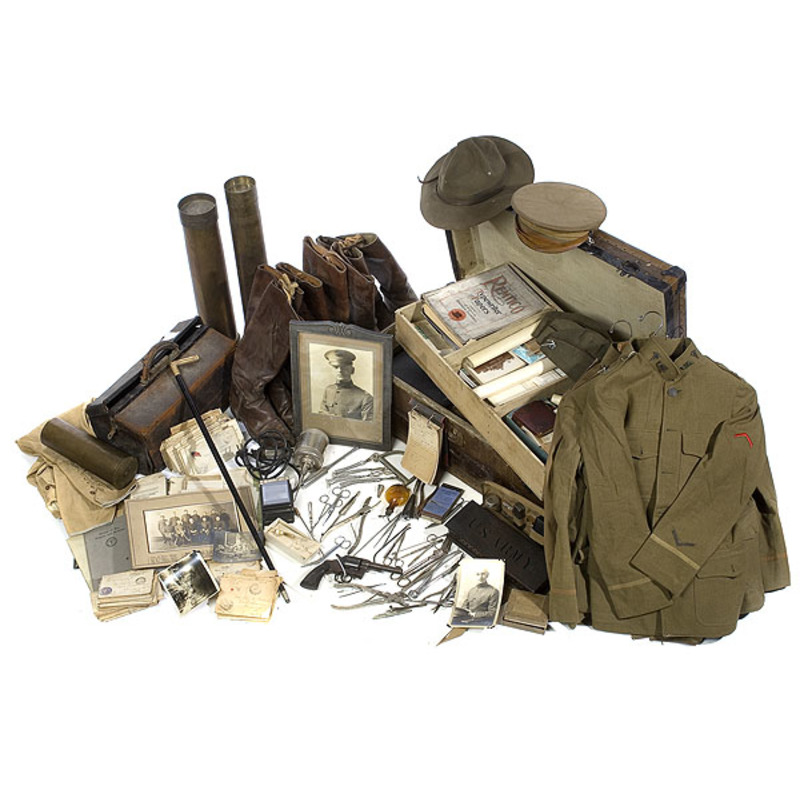 extensive archive of uniforms, equipment, documents, photographs and letters of this important Army surgeon active during WWI. This archive includes the following uniform pieces: 4 pairs of brown leather officer's calf-length boots, PLUS a broad-brimmed green felt hat with leather sweat band stamped U.S.A. and inked name J.A. Caldw. with leather chin strap, PLUS khaki green wool pants, PLUS khaki green wool pull over vest, PLUS khaki green wool 2 pocket shirt, PLUS khaki green corduroy cavalry-style pants, PLUS khaki green wool cavalry-style pants, PLUS two wool khaki uniform jackets, both with sterling captain's bars, all buttons, and one with medical Corps insignia and U.S. on collar, PLUS officer's cap with cast bronze cap badge and oilcloth cover, PLUS three wool khaki green army hats, one with sterling captain's bars and 2 with Medical Corps trim, PLUS a ball cap in canvas khaki with black leather bill with miner's lamp mount for operating without lights, PLUS brown leather belt and sword rig, PLUS 2 different types of Army woven ammunition belts, PLUS canteen with canvas cover stenciled U.S., PLUS 3 different military style and home made Housewives, PLUS two hanging khaki canvas field hospital kits with pockets for medical equipment, many of which are still full of the original equipment, PLUS medical supply kits in canvas, with much of the original contents, PLUS 2 khaki canvas tents, PLUS leather doctor's bag with many pieces of surgical equipment, PLUS six silver captains bars, PLUS extra Medical Corps collar badge, PLUS U.S.R. & U.S. collar badges, PLUS military brass compass in leather belt case, PLUS nickeled brass collapsing camp cup in original leather case, PLUS dress hat cords, PLUS WWI wick-style lighter, PLUS his .38 caliber Colt Service revolver, PLUS wooden jig-saw box with U.S. Army, PLUS 7 leather or woven military straps for tying equipment, PLUS 2 stencils, one large paper and one small brass with Capt. John A. Caldwell/M.R.C., PLUS 2 large brass artillery shells, 2 German and one American, one with note on Capt. Caldwell's card stating it is to be a gift for Buster.

The paper portion of this archive is even more extensive. Dr. John A. Caldwell Jr. was the son of Hon. John A. Caldwell, former Congressman and mayor of the City of Cincinnati, trained at University of Cincinnati Medical School. The WWI papers, letters and documents include two manuscript notebooks with combat injury case notes, including quite graphic drawings with notes on how to handle each injury, PLUS an binder with ca 100 letters, orders, leave passes and other military documents covering Caldwell's entire term of service from 1917-1919, PLUS a book of printed detachable triage tags entitled Diagnosis Tag U.S. Army For Use among Sick and Wounded on the Battle-Field., PLUS ca 70 letters written during the war, mainly from John to his wife, with a few to other people and a few from his wife to him, most with covers, many of which are Red Cross covers and stationary. Some of these letters are 30 pages long with much information about the effects of the war on the country and the soldiers he was treating, others with details about his travels while on leave, including a trip to London, Paris, Niece, Lyon and more. Photographs from the war includes images of Base Hospital 25, an operating theater, large group photo of the doctors of the Medical Corps, stationed at B.H. 25, and a dress uniform portrait of Caldwell. Lot also includes his military appointments and much more. This is likely the most extensive Medical Corps archive from this war still in private hands.

Other items in this archive include two soldier's overseas flags, one in silk and one reverse painted on glass and framed, PLUS three medals from the Ohio State Medical Assoc., of which Caldwell was past president, a box of newspaper clippings, PLUS a small pocket dictionary used by him in France during the war with his name inscribed on the fore-edge and name and rank on front end paper, PLUS 33 pre- and post-war letters and documents, extending into the 1930's, PLUS two boxes of patient reports from Cincinnati General Hospital, PLUS 14 different published articles from major American medical journals (reprints from same) with Caldwell as principle or second author, mainly dealing with fractures and head wounds, just the type of thing that he would have encountered in the field hospitals of France, PLUS medical diagrams and photographs of various traction devices, many of which Caldwell was involved in designing, including several he used during the war, PLUS 4 different photographic tour books from his time in France, some with detachable post card photos, AND a large group of family photographs and travel postcards. Lot includes Captain Caldwell's original footlocker and a tin document box in which many of the letters were found.

Condition:Uniforms have been worn, but are still in quite nice condition, tents are stiff, revolver with 60% original bluing, most paper with normal folds and some toning. Overall this archive is VG+.