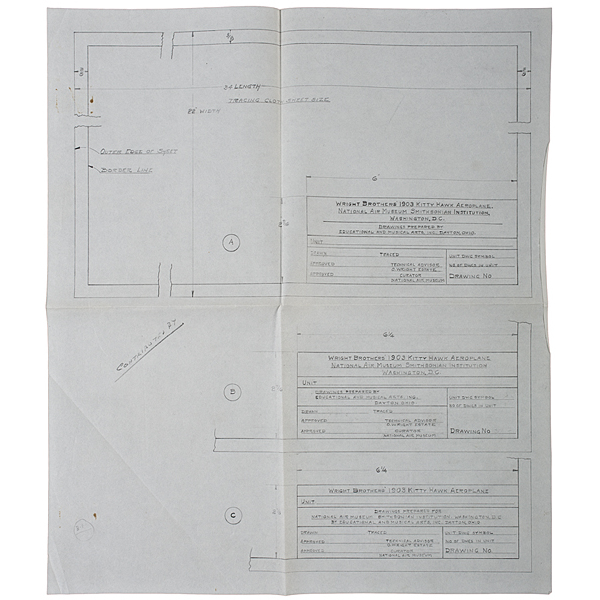 Wright Brothers, Original Drawings Delineated by Louis P. Christman for Restoration of the 1905 Wright Flyer, With Corrections Made by Orville Wright

The lot features drawings made for Colonel Deeds and Kettering for the Educational and Musical Arts, Inc., which later came to be known as Carillon Park in Dayton, Ohio. All redrawn, final images are stored in the National Air and Space Museum in the Wright Rotunda at Carillon Park. Including the following pencil drawings:

Detailed plans for the Drawing Paper. Note that the paper was being produced by the NCR Printing Facility in Dayton, Ohio. The paper was also designated for the National Air and Space Museum - Smithsonian Institution, Washington, D.C. 14.25 x 16.5 in.

The original pencil drawings of the Wright Flyers offered today as lots 314-319√ā¬†were made by Louis P. Christman between 1947 and 1951 for Colonel Edward E. Deeds and Charles F. Kettering at the National Cash Register Co. (NCR). The purpose of the drawings, as previously discussed, was to make a more precise set of drawings / prints of the Wright Brother's gliders as well as the 1903, 1904, and 1905 Flyers, which could be used to begin the reconstruction of the 1905 Wright Flyer. Christman conferred with Orville Wright and Colonel Deeds concerning the accuracy of the new set of drawings, therefore correcting any errors that might have been significant and would have affected reconstruction.

The pencil drawings show the word "redrawn" in several instances. This indicates that the drawing is indeed an original and the subsequent drawings were redrawn, or cleaned up, for presentation to the National Science Museum - Smithsonian Institution, in Washington, D.C.

As an employee of National Cash Register, with his experience in aircraft and machine design, Louis P. Christman was called upon by prominent engineer and inventor, Colonel Edward Deeds, to undertake the restoration of the 1905 Wright Flyer, which resides at Carillon Park, Dayton, Ohio. Christman was given the opportunity to work closely with Orville Wright in order to produce an accurate set of drawings, or blueprints, for the 1900, 1901, and 1902 gliders as well as the 1903, 1904, and 1905 Wright Flyers. Since no complete drawings were ever produced by Orville and Wilbur Wright during the building and flying of the planes, it was required that Christman travel to Washington, D.C. to the Smithsonian Institution to take measurements and make drawings from the original 1903 Flyer that is displayed there and to discuss these drawings with Orville Wright.

Continued meetings and conversations between Orville Wright, Colonel Deeds, and Christman resulted in a very refined set of drawings of the three planes and their engines √Ę‚ā¨‚Äú drawings that were quite satisfactory to Orville Wright. Christman, under the direction of Colonel Deeds, then began the restoration of the 1905 Flyer in 1947, on the grounds of the National Cash Register Co. This project involved not only incorporating as many original parts as could be obtained, but the designing and machining of matching parts in order to complete the aeroplane. This restoration project took Christman approximately 19 months, from the drawing stage to the completion of the frame. Final construction and assembly was completed at Carillon Historical Park, where the plane was reassembled and fabric was stretched.

Christman√Ę‚ā¨‚ĄĘs drawings are well documented in the Smithsonian Institution√Ę‚ā¨‚ĄĘs National Air and Space Museum. Knowledgeable men and women who have produced models and full-sized planes since 1948 have relied most exclusively on the √Ę‚ā¨ŇďChristman Drawings.√Ę‚ā¨¬Ě The Smithsonian Institution has recently produced framed copies of Christman√Ę‚ā¨‚ĄĘs three view plate, with consideration in print concerning the works of Christman. The work that Christman did for Orville Wright, Dayton Wright Aeroplane, Charles F. Kettering, Inland Manufacturing, NCR Corp., Colonel Deeds, and Carillon Park is of considerable historical importance and interest.

Lots√ā¬†308-319 represent a portion of items given to Christman for his work in restoring the 1905 Wright Flyer, and they have descended directly in his family.

Provenance:Descended in the Family of Louis P. Christman

With some wear to drawings, mainly along folds.