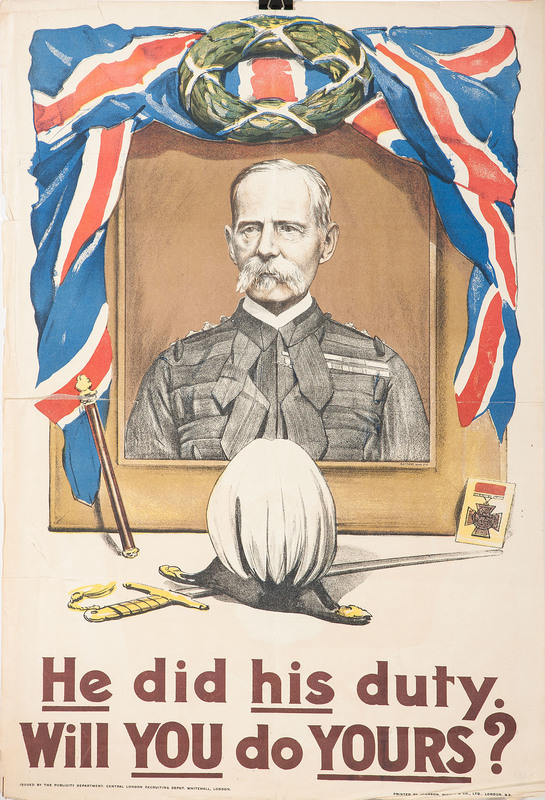 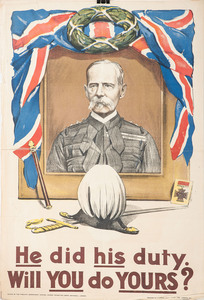 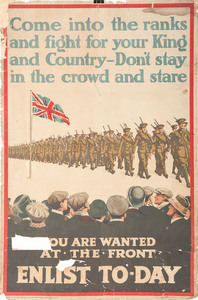 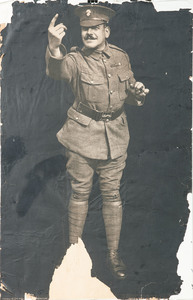 Printed broadside, 20 x 29.5 in. He did his duty. Will You do Yours? London: The Publicity Department, Central London Recruiting Depot, Johnson, Riddle, & Co., Ltd., n.d. ca 1914. Poster features a framed portrait of Lord Roberts of Kandahar with his sword, baton, plumed hat and Victoria Cross placed in front. The bottom right of his portrait reads, "Bassano Bond S.W." A Union Flag is draped over the picture frame, and a laurel wreath is positioned at the top. The title is separated at the bottom in bold font.

Printed broadside, 25.5 x 32 in. His Majesty's Foot Guards. London: Waterlow & Sons, Ltd. Lith., n.d. ca pre-1914. Poster features four full-length depictions of Irish, Scots, Coldstream and Grenadier Guardsmen. They wear full ceremonial dress and stand in front of a stone archway. Through the arch other guardsmen can be seen drilling on a parade ground. Title is placed above image, broken up by a large royal crown. Signature in lower right of image, "JB Baldwin 09." Below the image, text provides labels for each guard featured, "Irish Guards. Scots Guards. Coldstream Guards. Grenadier Guards." Heading titled, "General Advantages of the Army," is placed above text that reads, "Leaflets showing the Conditions of Service in the Army and Special Reserve, and containing full information as regards Pay, Food, Clothing, Quarters, Fuel and Light, Medical Attendance, Libraries, Recreation Rooms, Army Schools, &c., will be supplied Free [on] Application at any Post Office in the United Kingdom, or from any Sergeant Instructor of the Territorial Force or other Recrui[ter]."

Printed broadside, 25 x 37.5 in. Come into the ranks and fight for your King and Country–Don't stay in the crowd and stare. London: The Parliamentary Recruiting Committee, Roberts & Leete, Ltd., n.d. ca 1915. Poster features an image of a group of civilian men with their backs to the viewer, watching a parade of British infantrymen. The parade is passing a union flag positioned centre left. The title and message are integrated with the main title printed in blue in the top centre and subtitle in white across the bottom. The poster has a red border. Text below onlookers reads, "You are Wanted at the Front Enlist To-day."

Posters like these were used to recruit young men to serve in the Allied Forces. Britain declared war on Germany on August 4, 1914; therefore, recruitment initiatives began in earnest around that time. The first poster honors the illustrious military career of Lord Frederick Sleigh Roberts of Kandahar (1832-1914). He began his military service by winning the Victoria Cross during the Indian Mutiny, and he later served successfully in the Second Afghan War and the Boer War. Known affectionately as 'Bobs' after Rudyard Kipling’s poem about him, he eventually became the last Commander-in-Chief of the British Army. Lord Roberts died in 1914 while visiting British troops on the Western Front.

The last poster appears to be the most rare, as broadsides featuring Field Marshal Kitchener typically included a drawing of him, pointing his finger directly at the viewer, with the text, "Your country needs you," surrounding his image. In this broadside, his whole body is featured, standing, and making a different kind of beckoning gesture with his right hand.

All posters have brittleness on edges and corners, a few with some chunks of print missing.