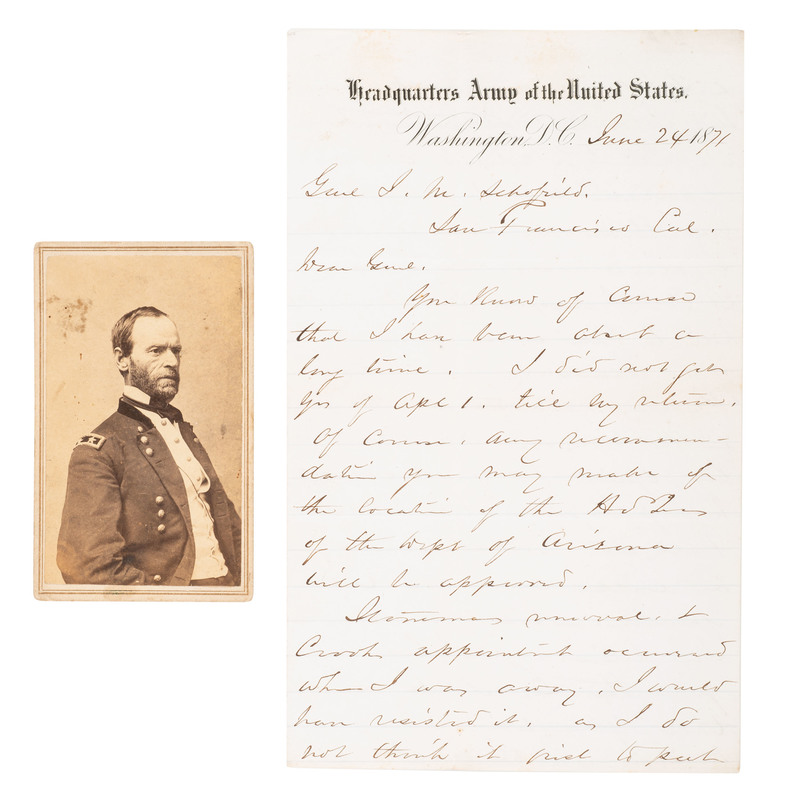 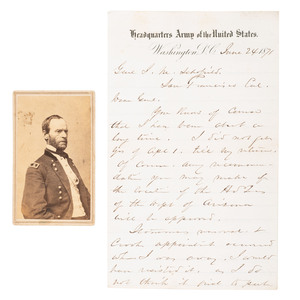 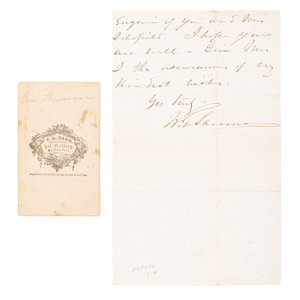 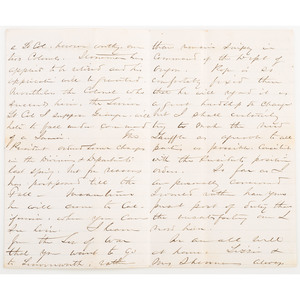 Sherman, William Tecumseh (1820-1891). Civil War general, Commanding General of the US Army, and US Secretary of War. ALS as Commanding General. 4pp, 5 x 8.125 in., Washington, DC. June 24, 1871. Addressed to General J.M. Schofield, San Francisco, CA and written on US Army Headquarters letterhead with indecipherable embossed seal in upper left corner. Sherman's recipient, John McAllister Schofield (1831-1906), was likely commanding the Military Division of the Pacific at the time this letter was written.

Sherman writes to Schofield of personnel changes including the removal of George Stoneman from his post as Commander of the Army's Department of Arizona, and the appointment of George Crook to that position - both of which took place in Sherman's absence. He explains his disapproval of the changes, writing, "I would have resisted it, as I do not think it just to put a Lt Col, however worthy, over two Colonels. Stoneman has applied to be retired and his application will be granted. Nevertheless the Colonel who succeeds him, the Senior Lt Col I suppose Granger, will hate to fall under command of a Junior." Sherman goes on to address Schofield's desire to move to Leavenworth, along with his own dissatisfaction with his position. He writes, "I learn from the Sec of War that you want to go to Leavenworth, rather than remain simply in command of the people of Oregon. Pope is so comfortably fixed there that he will regard it as a great hardship to change...So far as I am personally concerned I would rather have your present post of duty than the unsatisfactory one I now have." Sherman closes the letter with a status update on his loved ones and well wishes for Schofield and his family.

This piece of correspondence between Sherman and Schofield reveals Sherman's keen awareness of the ways in which army personnel and position changes might affect morale, naming specific officers who might feel slighted by certain promotions or role shifts. This fascinating glimpse into Sherman's mind also betrays his disenchantment with his own role as Commanding General, a position in which he would remain for twelve more years. It is known that Sherman's years of service in this capacity were not without their difficulties, including conflicts with Secretaries of War John Rawlins and William Belknap, and clashes with many over his harsh treatment of Indians threatening western settlement.

Accompanying the letter is a CDV of General Sherman featured wearing his Major General's coat, with E.R. Gard, Chicago backmark and pencil identification on verso.

Letter with some light surface soil, toning in some spots, and vertical and horizontal creases. Ink still bold and clear.

CDV with surface soil, spots of discoloration throughout, and wear to edges/corners. Portrait still quite clear.