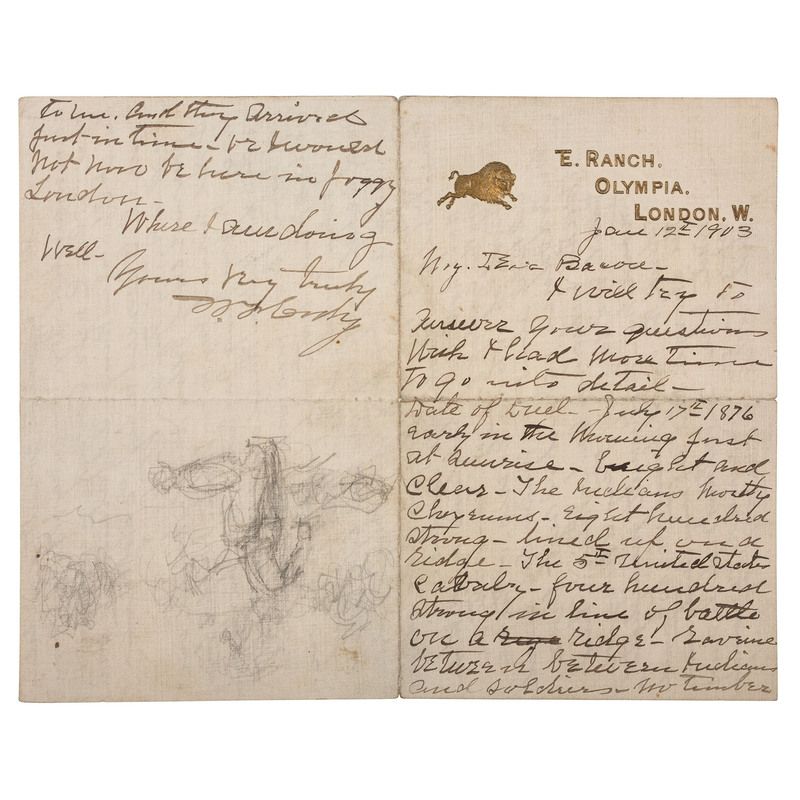 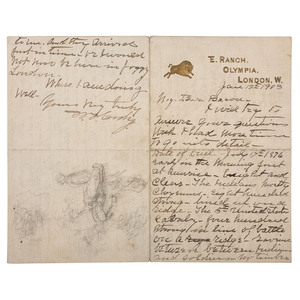 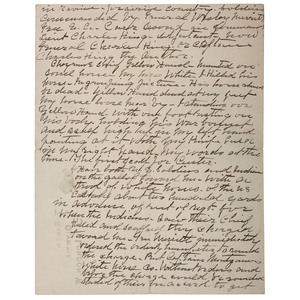 MY WORDS AT THE TIME - "THE FIRST SCALP FOR CUSTER."

Irving R. Bacon (1875-1962) was one of the many artists who contributed illustrations to W.F. Bayer and O.F. Keydel's history of the Congressional Medal of Honor, Deeds of Honor. Bacon's interpretation and composition of Cody's action which earned him the Medal in 1872 impressed the western showman and inspired him to commission a painted version from the artist in 1901. Bacon delivered the completed painting Buffalo Bill in Pursuit, or Two with One Shot in the spring of 1902 where Cody was in New York preparing for the 1902 season. This meeting was the start of a fruitful working relationship between the two men with Bacon helping to visually cement Cody's western self-presentation.

In December 1902, Cody and Bacon had discussed the creation of a painting of Cody's July 17, 1876 duel with Cheyenne warrior Yellow Hand at Warbonnet Creek. Cody left to tour Europe, and the two corresponded about the details of the painting. Here Cody responds to a request from Irving for details of the battle. Cody, on tour and apparently short on time writes in brief clauses: "Date of Duel - July 17th 1876 early in the morning first at sunrise - bright and clear. The Indians mostly Cheyennes - Eight hundred strong - lined up on a ridge. The 5th United States Cavalry - four hundred strong in line of battle on a ridge - ravine between  between Indians and soldiers - no timber in ravine - for arid country."

After setting the scene, Cody focuses on Yellow Hand (Heova'ehe, correctly translated as Yellow Hair, ca 1850?-1876) and how to portray their duel: "Cheyenne Chief Yellow Hand - mounted on sorrel horse - my horse white - I killed his horse - the grounding picture - His horse should be dead - Yellow Hand dead at my feet my horse loose near by - I standing over Yellow Hand. With my foot resting on his body. holding his war bonnet and scalp high up in my left hand pointing at it with my knife scalp in my right hand my words at the time - "The first scalp for Custer."

He completes his recollections of the battle with suggestions for how the main groups of combatants should be handled: "Have both U.S. Soldiers and Indians on the gallop toward me with a troop of white horses of the U.S. Cavalry about two hundred yards in advance of rest of right for when the Indians saw their Chief killed and scalped they charged toward me - Gen. Merritt immediately ordered the orderly trumpeter to sound the charge. But Captain Montgomery White Horse Co. with out orders and before the charge could be sounded started of[f] their line to get to me. And they arrived just in time - or I would not now be here in foggy London. Where I am doing well."

Below Cody's closing is a small unsigned pencil drawing of a rider on a rearing horse  among the suggestion of scrubland. Perhaps a composition suggestion by Cody or a preliminary sketch by Bacon after reading Cody's colorful account.

In Irving's finished painting, The Killing of Yellow Hand now in the collection of the Buffalo Bill Center of the West, the events of the battle are essentialized and the singular focus of the painting is the combatants. The composition is dominated by Cody and Yellow Hand, each on horseback, in a shallow valley of scrubland as described in this letter by Cody. Yellow Hand, wearing a feathered war bonnet struggles to maintain control of his falling horse, Cody fires his Winchester atop a white steed. The large groups of combatants on both sides that Cody describes who were present at the real skirmish are relegated to the far horizons.

The scalping of the Cheyenne chief which occurred at the real duel is also eliminated. This was one of the first engagements after Custer's defeat at Little Big Horn, and was often referred to as the "First Scalp for Custer," where Buffalo Bill claims he shouted the vengeful words and held the scalp high. Bacon, however, expressed deep reservations in a return letter and later Cody agreed that it "might look bad to some people." The oil on canvas was completed in 1906, but Cody appears to have never taken possession of it perhaps due to lack of funds to pay Bacon, a somewhat persistent problem (see Lot 408). The public was first able to see the work when Cody used it to illustrate a chapter in his 1908 autobiography True Tails of the Plains, where he also eschews mention of the scalping in his narrative.