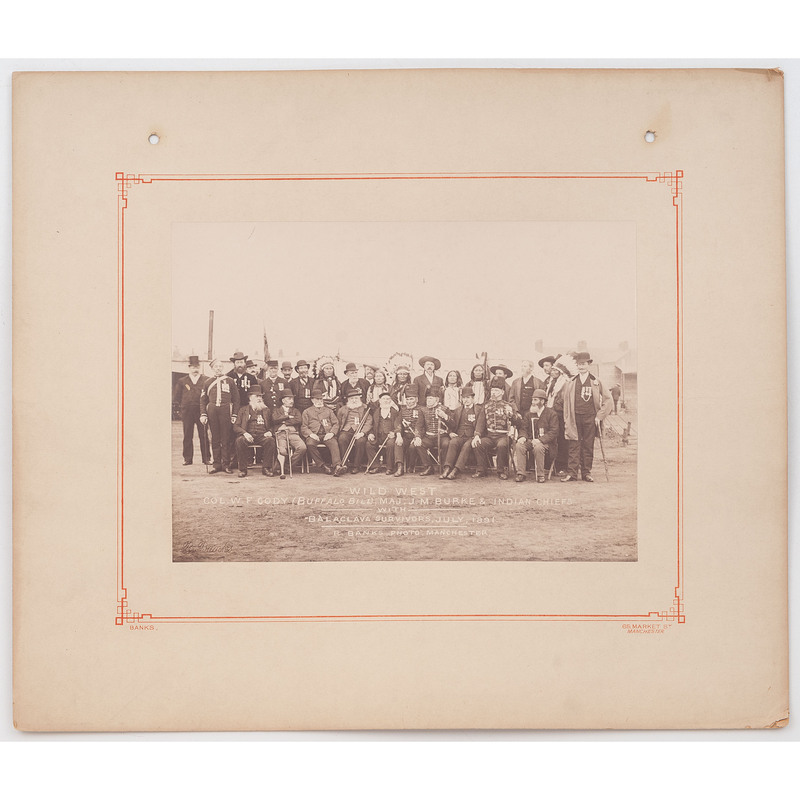 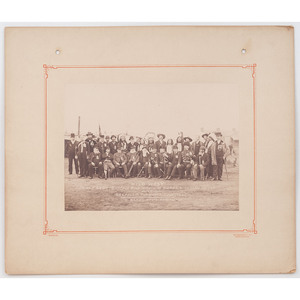 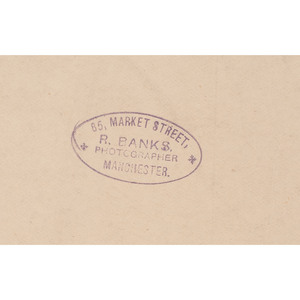 William F. Cody had brought his Buffalo Bill's Wild West show to England for the first time in 1887 in honor of the Golden Jubilee of Queen Victoria, traveling across the Atlantic with over 100 Indians and other performers and over 200 horses and American buffalo. The tour was a smashing success, with near-daily shows in London from May to October in London and then in a specially-built arena in Manchester from November to May of 1888, being attended by of 2.5 million spectators, including Queen Victoria and scores of other dignitaries and foreign leaders from across Europe. The performers were especially fond of their accommodations in Manchester, and the citizens of the city responded in kind, naming streets in the Salford area things like Buffalo Court and Kansas Avenue -- names which persist to the present day. The show was equally popular when it returned for the 1891 season.

Cody's show was later styled "Buffalo Bill's Wild West Show and Congress of Rough Riders of the World," incorporating skilled horseman and warriors from cultures across the globe, whom he regarded united by talent and honor more than national allegiance. One of the most famed cavalry forces in the world was the 17th Lancers and their compatriots, immortalized by Alfred Lord Tennyson's 1854 poem, "The Charge of the Light Brigade."  During one of his visits Cody met Sergeant-Major J.I. Nunnerley, one of only 38 of the 145 Lancers who returned from the Charge, and through their meetings became aware of the plight of the few surviving veterans of the Charge, many who had fallen on hard times, received only small government pensions, and suffered from poor health and lingering wounds. Cody, known to be a generous soul and humanitarian, decided to invite the survivors to a performance to be honored, and that the proceeds from the show would be for their benefit. An ad taken out in the Manchester Evening News of July 29, 1891, extolled the show as "The Event of a Lifetime!/ Extraordinary Combined Attraction for the Balaclava Veterans' Benefit." Cody obtained the permission of Colonel Waldrop of the 12th Lancers to employ his troops for a mounted lance drill and sword exercise, accompanied by a performance of the 12th Lancers band and an exhibition of "Miniature Volunteers (aged 6 to 10 years)" to create a "Unique Military Spectacle" involving the "The Heroes of the Past/ England's Defenders of the Present/ The Soldier Lads of the Future" along with "The Experienced Red and White Warriors of the West" and "The Entire Wild West Programme."  The final line of the ad read in bold, "HELP THE CAUSE! COME! ATTEND!"

This is the portrait of the 17 beneficiaries of the event who were able to attend, including Sergeant-Major Nunnerley and six other veterans of the 17th Lancers, four veterans of the 11th Hussars, five from the 8th Hussars, and one from the 4th Light Dragoons, with the old veterans wearing ill-fitting uniforms affixed with their medals, sporting white beards and holding their canes, and one proudly displaying his wooden leg. Local newspapers reported the benefit as highly successful, and one article notes the strong feelings it aroused in the public:

...Last night, the proprietors of the Wild West Company put aside a liberal proportion of their takings for the benefit of a fund to provide the survivors of the Charge of the Light Brigade at Balaclava with the necessities of life. Deeply as all right-minded people must feel the kindness that has prompted this, no other impression can be left than that it is a scandal that such a function should be possible. For American caterers of public amusement, however distinguished they may be, to have to step in to support our worn-out and neglected heroes is almost a national disgrace to us. All honour, however, to Buffalo Bill and his comrades for their kindness and charity...