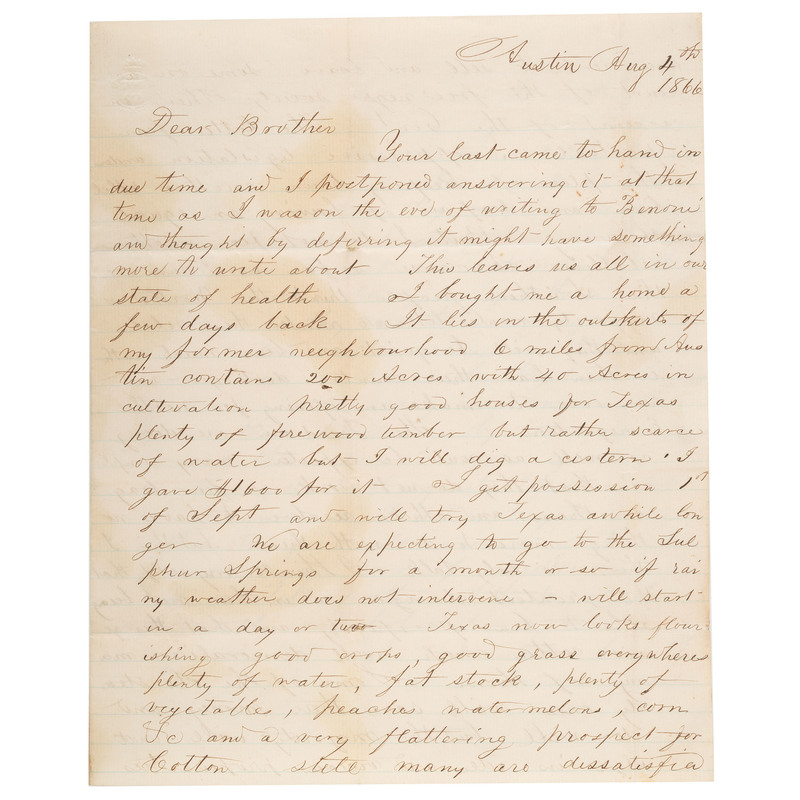 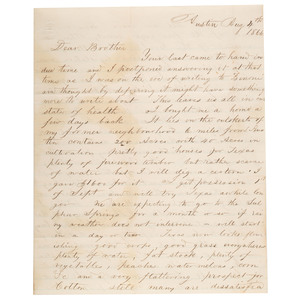 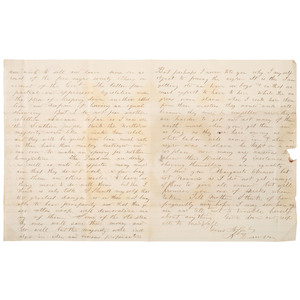 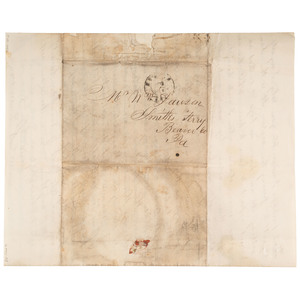 "Why I Object to Freeing the Negro" ALS from Reconstruction Era Texas, 1866

A fascinating letter from a white Texas homesteader to his brother in Pennsylvania. The content, while unsavory, provides a captivating insight into the racial politics of early Reconstruction Texas. Dawson writes about his own prospects, but most of the letter concerns African American Texans.

Dawson opens his letter writing about the property and house he has bought near Austin and gives his perspective on the state, “Texas now looks flourishing - good crops, good grass, everywhere plenty of water, fat stock, plenty of vegetables, peaches, watermelons, corn, etc. and a very flattering prospect for better. Still many are dissatisfied and wish to sell and leave some on account of the free negro society, others on account of the Govt.”

He continues on regarding black Texans in detail, his biases and negative stereotypes evident, “The Freedmen are doing as well as could be expected, many complain that they do not work, a few brag on them, and others resolve to have nothing more to do with them but this I think is only talk. I think myself that the greatest danger is in their not being able to bear prosperity and that this year’s cotton crop will demoralize many of them. Some of the old steady ones will save their money and do well but the majority will indulge in idle and vicious propensities.”

Austin was a hotbed of unrest in the early days of Texas Reconstruction. Federal troops occupied the state in late May 1865 in an attempt to ensure loyal government and to protect the newly granted rights to freed blacks. Many white Texans, as Dawson here, focused on the permanent disruption of labor and believed that it would destroy the entire economy. Dawson writes explicitly about his opposition to ending slavery, “But perhaps I never told you why I myself object to freeing the negro. It is this. I am getting old and have no boys + on that account expect to have to hire. While the negroes were slaves when I could hire them from their masters they would work well because they could be compelled. Now they are harder to get and not many of them worth much when you get them and as long as they are here among us no white labor will come in + when a negro was a slave he kept in a negro’s place. Now many are anxious to show their freedom by insolence [illegible] shoving themselves on an equality.”

Creases, some toning, contemporary tearing at sight of seal, soiling to exterior of where letter was folded for delivery.