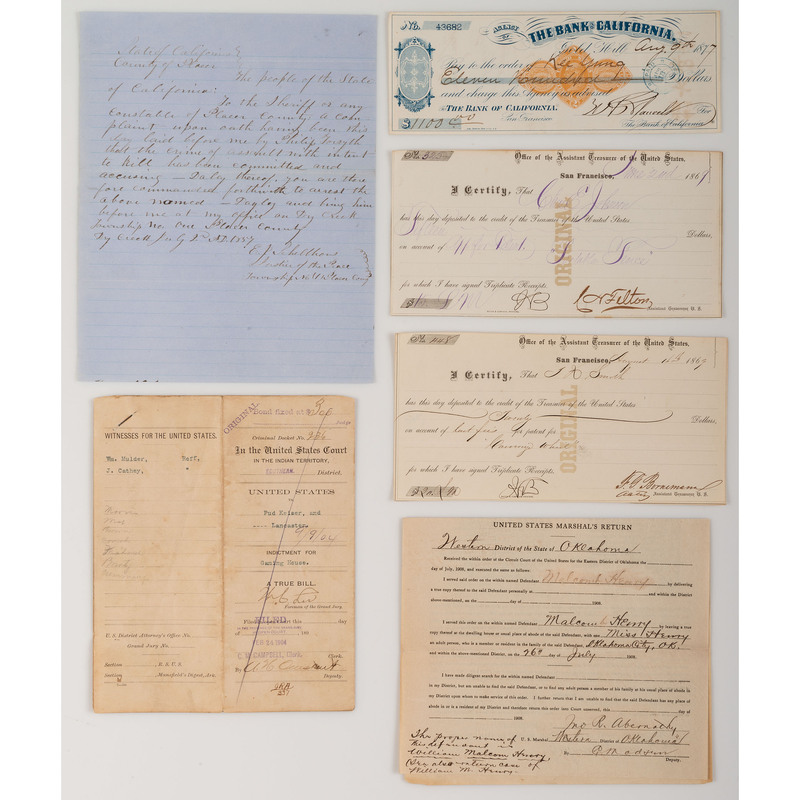 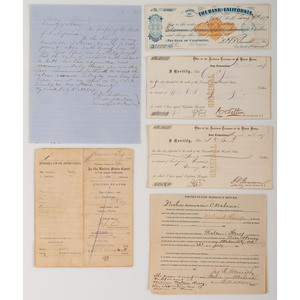 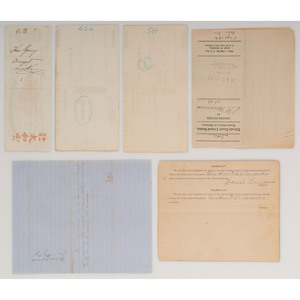 U.S. Court, Indian Territory, Southern District. Indictment of "Pud Keiser and -----Lancaster (Whose christian name is to the grand jurors unknown), who were not then and there ____member of any Indian Nation," for running a gaming house, "where divers idle and lewd persons did frequent and come together to play at certain games of chance with cards for money; and did then and there keep and exhibit gaming tables." 16 Feb. 1904. With attached addendum from the jurors requesting leniency of the court in regard to the jail sentence.

Receipt for prisoner, Bill Raidler, Guthrie, O.T. Sept 8, 1895. 3.75 x 8 in. Original jail receipt for outlaw Bill Raidler. While working on the Oscar Halsell Ranch in Oklahoma, he met and joined up with the Dalton-Doolin gang, participating in numerous robberies and other crimes. Heck Thomas caught up with him and a gunfight ensued. Raidler lost two fingers but escaped in the brush. William Tilghman learned of Raidler's whereabouts and on September 6, 1895 went to arrest him. Raidler opened fire again, rather than surrendering, and Tilghman inflicted 6 wounds with his shotgun. The deputy got water and gave the outlaw first aid, threw him in a wagon and took him to a doctor in Elgin. Two days later Tilghman took Raidler to jail; this is the original receipt for that "delivery." The wounds left Raidler with locomotor problems, and even though he had been sentenced to 10 years in prison, he was able to get an early release with Tilghman's help. While in prison, Raidler met Al Jennings and the two were close for the remainder of their lives. After his release, Raidler became a nationally-known story writer.

Marshal's Return. Statement by  John Abernathy, U.S. Marshal in the western District of Oklahoma, stated that he left a copy of the warrant with a member of the family of Malcom Henry, one Miss Henry, presumed to be a daughter. Oklahoma City, OK, 26 July 1908. 7 x 8.25 in.

ADS, Placer County, California, 2 July 1857. Warrant for the arrest of ____Daley/Dayley for assault with intent to kill. Signed E. P. Schellhaus(?), Justice of the Peace.