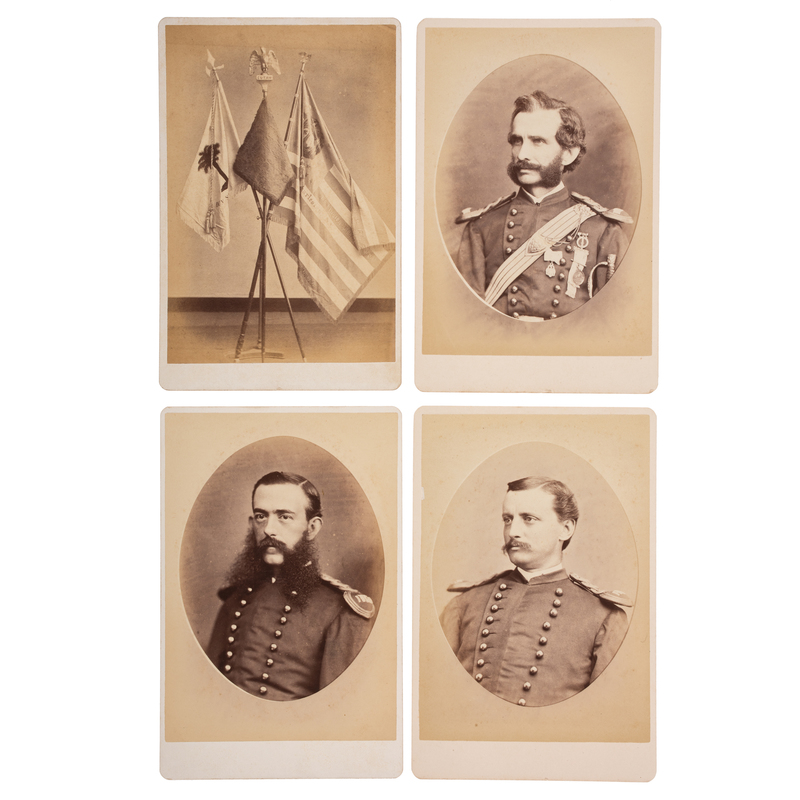 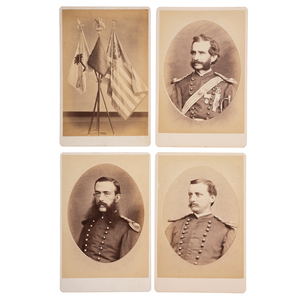 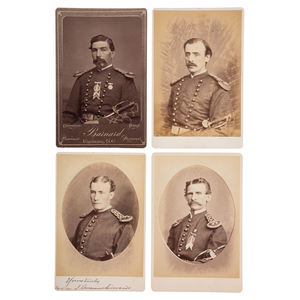 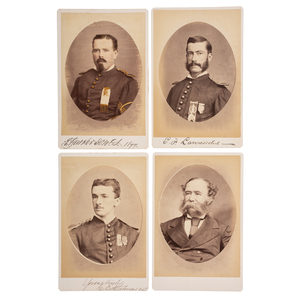 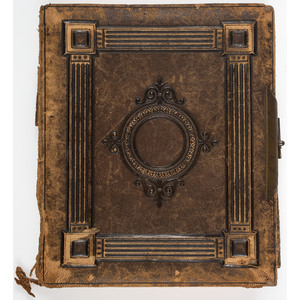 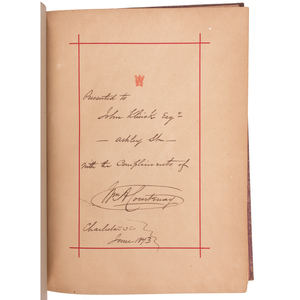 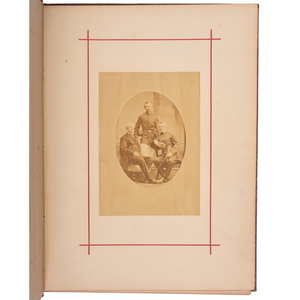 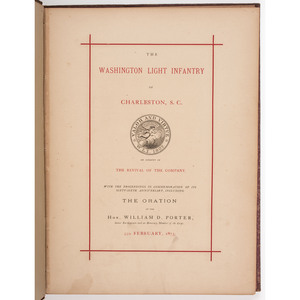 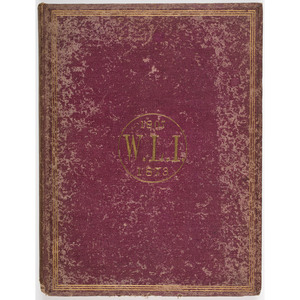 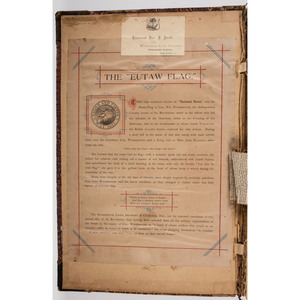 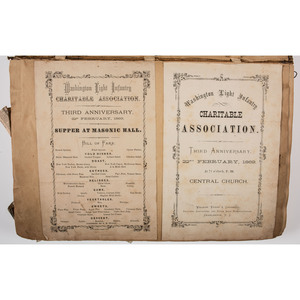 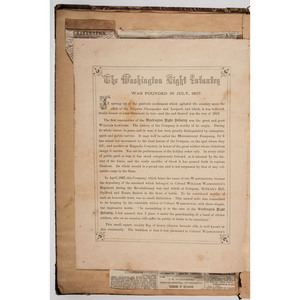 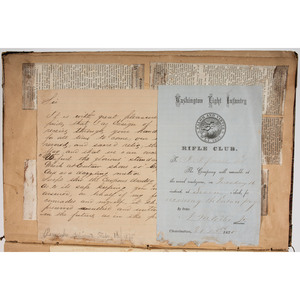 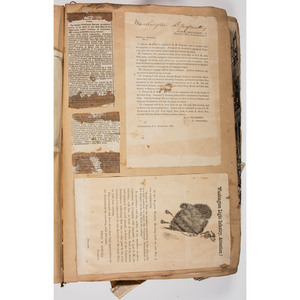 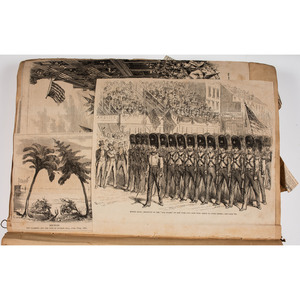 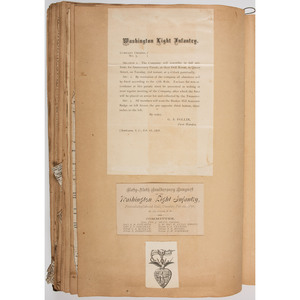 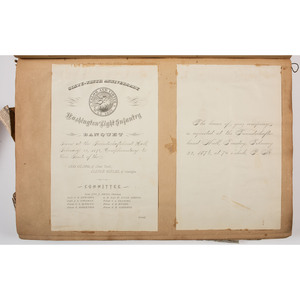 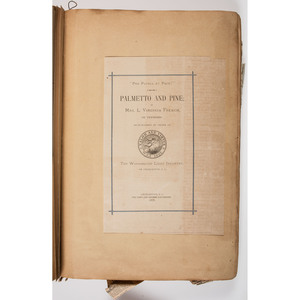 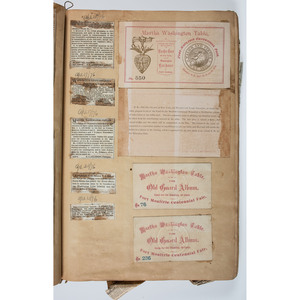 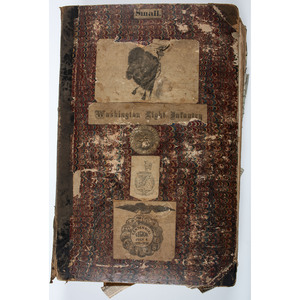 The Washington Light Infantry of Charleston, S.C.: An Account of the Revival of the Company, with the proceedings in commemoration of its sixty-sixth Anniversary, Including the Oration of the Hon. William D. Porter, Senior Ex-Captain and an Honorary Member of the Corps. 22nd February 1873. Charleston (SC): Walker, Evans & Cogswell, Printers, n.d. (ca. 1873). Approx. 8 x 11 in., maroon leather with beveled boards; front with "Washington Light Infantry / 1807-1873" in gilt in circle on front; each page with red borders outlining text block; 99pp. On free front endpaper, "Presented to John Klinck, Esqr. / Ashley St. / With the compliments of / William A. Courtenay / Charleston, S.C. / June 18, 1875." Frontis is tipped in 3.5 x 5.25 in. albumen photo og three men in uniform. With some history of the company, lists of commanders, chaplains, orators, members.

Ledger with marbled paper boards and leather spine 8.5 x 14.5 in. With over 120 pages with items affixed plus 21 blank leaves at rear. Rear pastedown and free endpaper do have items on them. Dates from 22 Feb. 1869 (Washington's birthday anniversary, 3rd Annual Banquet) to April 1879. Front with some Washington Light symbols, at top "Small." On front pastedown is the calling card of Lieutenant John J. Small. The scrapbook contains many different items, such as fliers for the annual banquets, as well as their menus; hundreds of newspaper clippings; monument dedications; several letters, much more. Some of these are affixed to flaps of paper two, three or more items deep. One letter is interesting in light of this lot:

To the officers and members of the Washington Light Infantry
The committee appointed to prepare on behalf of the company a proper and suitable acknowledgement to Mr. W.E. Baker of Wellesley for the acts of hospitality and kindness extended to the Corps, respectfully report that they have had prepared an album with the photographs in uniform of the officers and members of the Company that this is now completed & ready to be forwarded to Mr. Baker...." Apparently these photo albums were often assembled as tokens of respect.

The Washington Light Infantry is one of America's oldest militia units, which was organized in Charleston, SC in 1807 and named in honor of George Washington. Since its inception, the WLI has participated in every major war that the US has fought, including the War of 1812, the Seminole Wars in Florida, the Mexican-American War, the Civil War, and World Wars I and II. In 1842, the WLI also helped to establish the South Carolina Military Academy, also known as the Citadel.

In 1875 Major George McLean, commander of the Old Guard - New York and Capt. Robert Gilchrist, Commander of the Washington Light Infantry, Charleston, SC, while at the Bunker Hill Centennial Celebration in Boston, suggested forming a Centennial Legion of Historic Military Commands and have a parade the following July 4 which would include at least one historic military command from each of the 13 original states. This came together and was an overwhelming success. (It is possible that the association with Mr. Baker [above] came about through the Centennial Legion.)

Photo album and  cards in very good condition, other than covers separated and spine leather gone.

Many items affixed to scrapbook with adhesive staining.

Book on the WLI with staining on boards that may be old (inactive) mildew stains. A few scattered stains internally. 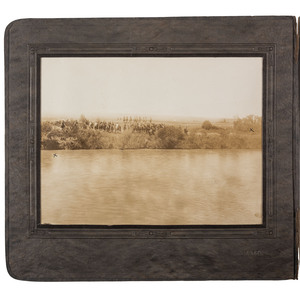