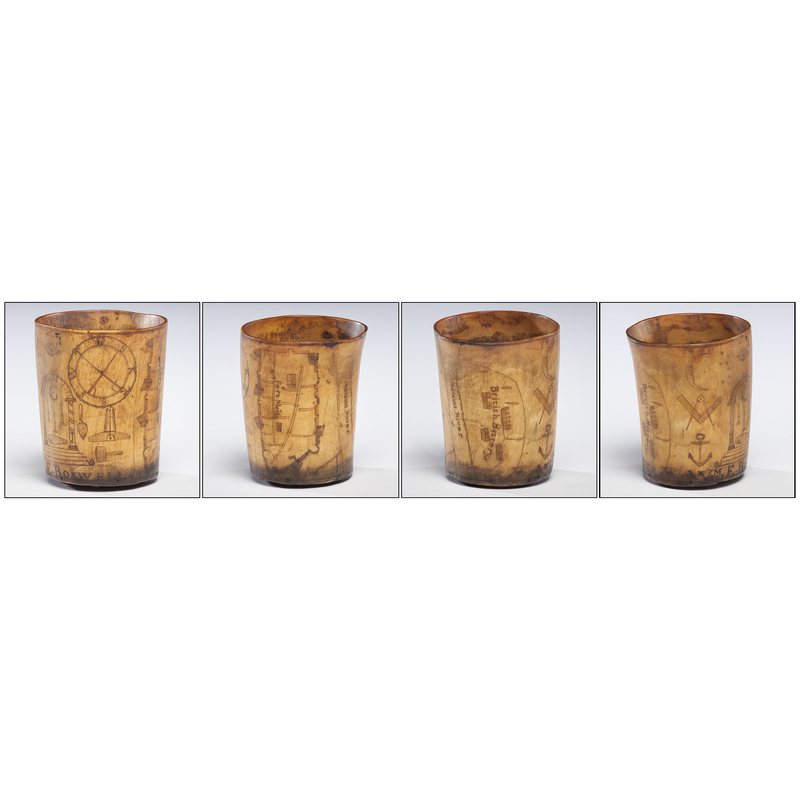 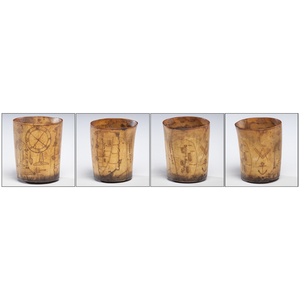 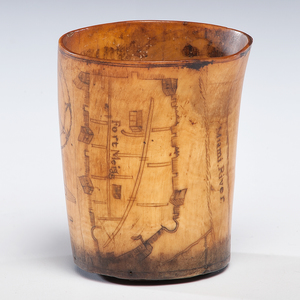 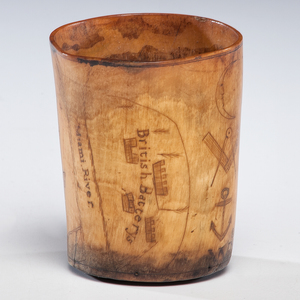 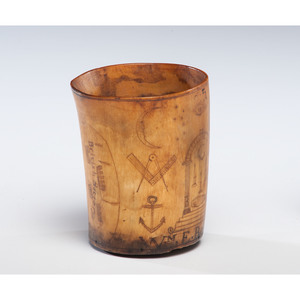 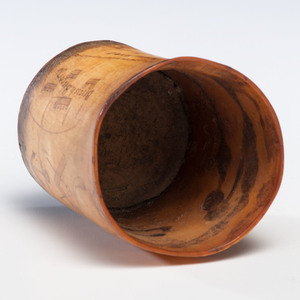 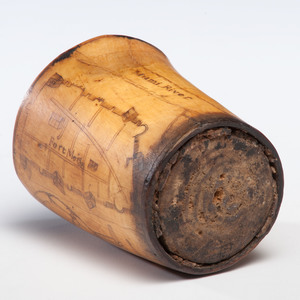 An exquisite and rare horn cup, approx. 2.75 in. height, 2 in. diameter at base, and 2.5 in. diameter at opening, with scrimshaw design including masonic motifs, a map of Fort Meigs and the surrounding area around the time of the siege, and the colonel's name, "Wm. E. Boswell," featured along bottom rim. Boswell's illustration of the fort includes rather accurate depictions of block houses, gates, gun batteries, two inner buildings (likely either storehouses or powder magazines), and large dirt mounds, or traverses, running the length of the fort. To the right of the fort, Boswell includes the Maumee River, labelled with its original name probably still in use at the time of the battery, "Miami River." Boswell also includes four "British Batterys" to the right of the river, in various sizes.

Fort Meigs was built under the command of General William Henry Harrison during the War of 1812, originally intended as a base to gather men and supplies for a winter invasion into Canada. After that plan was abandoned, the purpose of the fort shifted to a defensive one, providing a checkpoint to keep British forces from advancing further into American territory. Once construction was completed in April of 1813, that purpose was put to the test. The British, under the command of General Henry Proctor, traveled south from Fort Malden in Upper Canada and camped just north of the Maumee River. They opened fire on Fort Meigs on the morning of May 1st, and continued for several days. During that time, General Harrison rushed to help defend the fort, ordering his men to build traverses that would successfully block British gunfire. Harrison also convinced Kentucky Governor Isaac Shelby to send a brigade of militia under Brigadier General Green Clay to assist in the defense of the fort. In the end, though American forces suffered heavy losses, the British and their Indian allies withdrew from the fort, resulting in a long-awaited American victory.

One of the regiments sent to help the beleaguered fort was commanded by Colonel William E. Boswell, in charge of the 10th Kentucky Volunteer Light Infantry, organized on April 29, 1812, and later a regiment of Kentucky Detached Militia, organized on March 6, 1813. Boswell's regiment set out for Fort Meigs from Cincinnati on April 7, after a robust entreaty from General Clay to remember their "butchered brothers" who fell to the British at the Battle of the River Raisin. Following General Winchester's old route to the Maumee River, Boswell's men marched through Dayton, Franklinton (now Columbus), Upper Sandusky, and Lower Sandusky, eventually reaching St. Mary's Blockhouse on the St. Mary's River on April 28th. Boswell and his men then descended the St. Mary's River to Fort Defiance, and reached a point about 18 miles from Fort Meigs on the evening of May 4th. A small group of Boswell's men, led by Major David Trimble, pressed on through the forest, reaching the fort by midnight and informing the worn troops that reinforcements were near. Boswell and four hundred of his men reached the fort sometime thereafter, following what A. C. Quisenberry called ". . . some hard and brilliant fighting." It is likely they engaged with Indian combatants on their way to the fort upon orders from General Harrison.

Horn cup has a lovely patina, with light wear to some images from handling and use, light age staining, and old, accumulated dirt and debris in base.