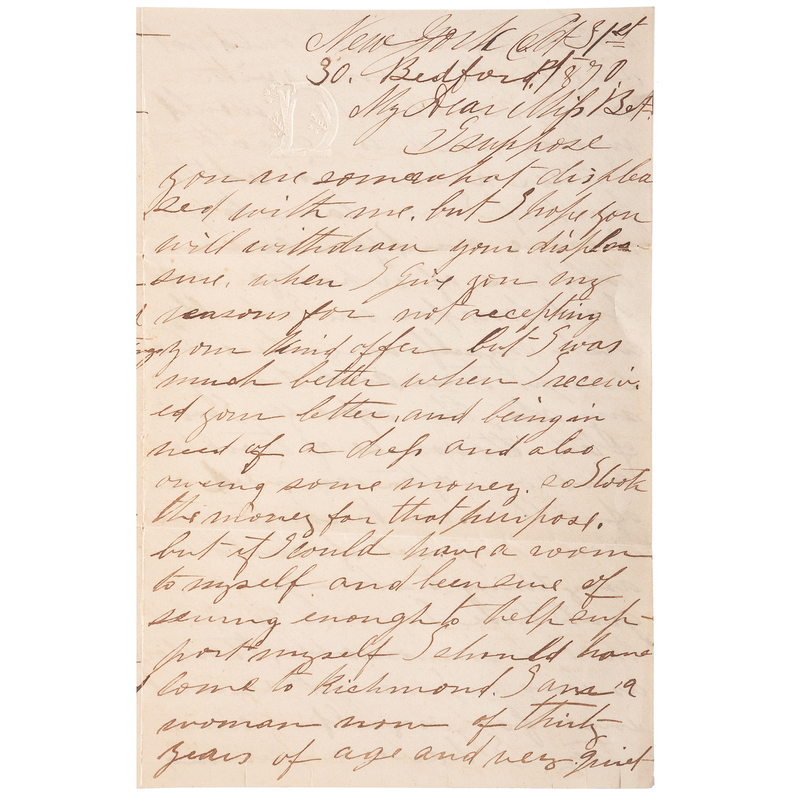 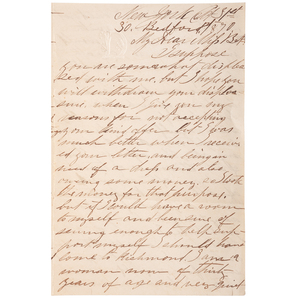 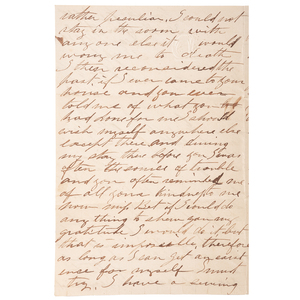 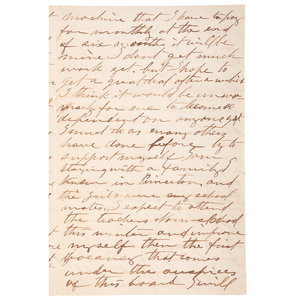 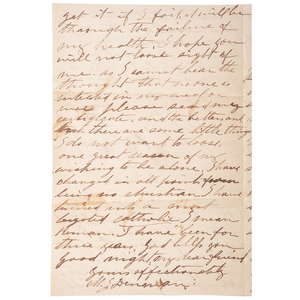 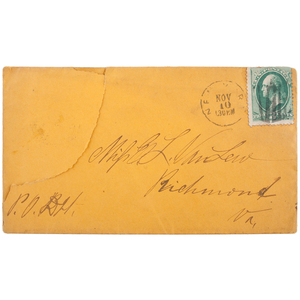 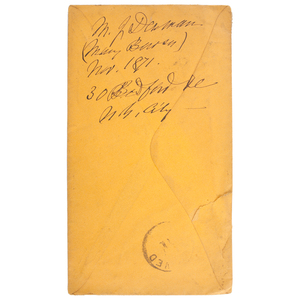 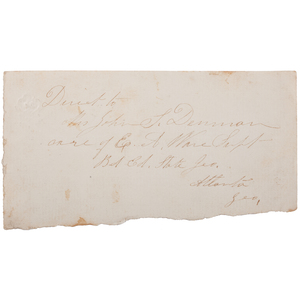 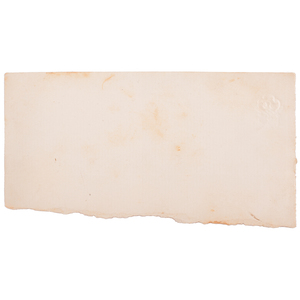 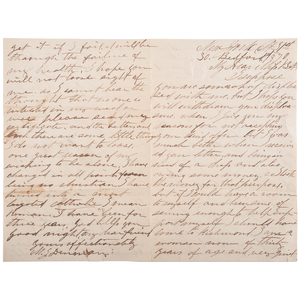 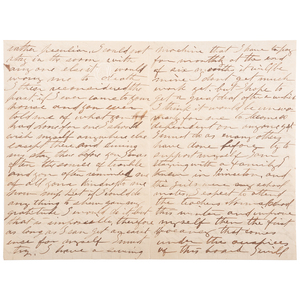 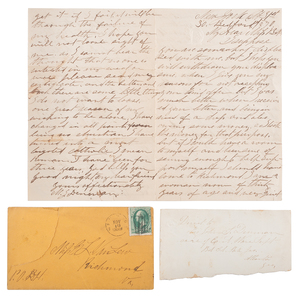 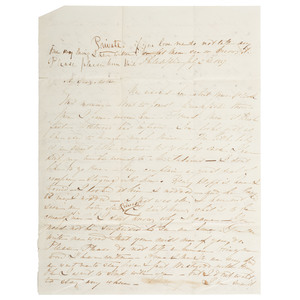 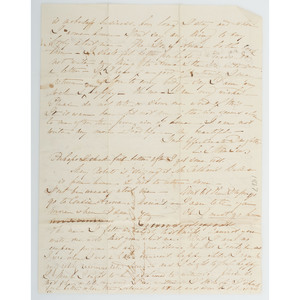 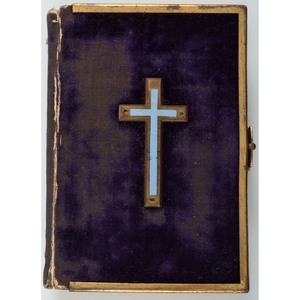 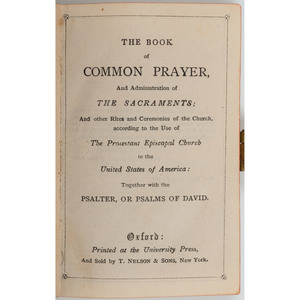 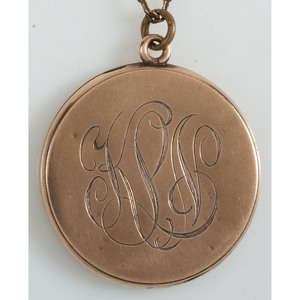 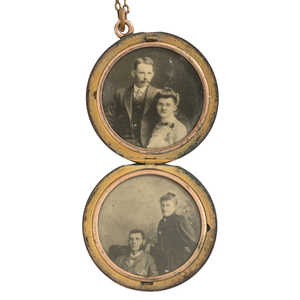 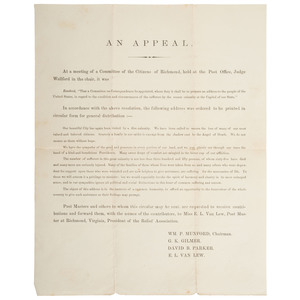 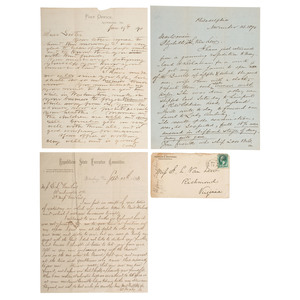 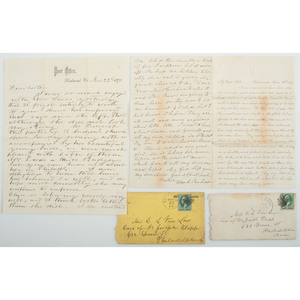 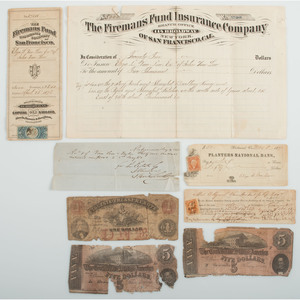 Lot of 18 letters, plus several miscellaneous family documents, a ca 1870 broadside, a Protestant Episcopal Church prayer book, and a locket. Letters span approximately 1843-1888 and consist primarily of personal, family correspondence from multiple members of the Van Lew family including Eliza Louise Baker Van Lew, her son John Newton Van Lew, and her daughter Elizabeth Louise Van Lew, leader of a Union spy-ring in the Confederate capital of Richmond, Virginia. The collection is highlighted by two letters: a post-war letter written by a despondent Elizabeth Van Lew to her mother and a newly discovered letter written by Mary Richards Bowser, a former Van Lew slave who also participated in Elizabeth Van Lew's espionage ring.

Elizabeth L. Van Lew (1818-1900), or "Bet" as she was often called, was born in Richmond to a wealthy and prominent family. Though the Van Lews owned slaves, Elizabeth and her mother, a native of Philadelphia, privately harbored anti-slavery views. Notably, Elizabeth and her mother acted on these views prior to the war by giving the Van Lew slaves their de facto freedom, amongst those a young woman named Mary Jane Richards (ca 1841 - unknown). The Van Lew family also took the unusual step of sending Mary north to Princeton, New Jersey, to be educated. After serving as a missionary in Liberia, Mary Richards returned to Richmond in 1860, and to the service of the Van Lew family. It was during the Civil War years that Elizabeth Van Lew oversaw a clandestine spy network operating throughout the city of Richmond. Her former slave, then known as Mary Bowser following an 1861 wedding to fellow servant Wilson Bowser, collaborated with Elizabeth in her espionage. Mary played a crucial role in the city's Unionist underground serving as both servant, and spy, in Jefferson Davis' Confederate White House.

None of the letters in the archive are war-date, however, the correspondence does provide an intimate glimpse into the internal conflict experienced by Elizabeth Van Lew while living in an exceedingly hostile former Confederate capital where anti-Union feelings remained strong. In a poignant letter penned to her mother on July 2, 1867, a deeply despondent Elizabeth describes her unhappiness while visiting family in Philadelphia: "Oh me - I felt wickedly last night. Cannot you write me word that you want me. But I am no company for you or any one else. Oh that I could be as I was when I was a little inniscent happy child. I can be very easily accommodated here and I ought to feel happy. I think I ought to be ashamed to write so please do not show or tell one word I have written...." A separate paper fragment, undated and unsigned, but seemingly in Elizabeth's hand, paints an even lonelier picture with hastily written thoughts penned and then crossed out. The fragment reads in part: "...I have been so panicked and so isolated" then on the reverse, "Understand not for my people but for my country I have stood firm & faithful I been I did was called to stand often alone foremost here & I have stood [?] under trials which would have shattered any slave [?] & the pitiless war has now [?] never ceased towards me[.]"

Despite her post-war struggles, Elizabeth maintained her role as postmaster of Richmond (appointed in 1869 by President Ulysses S. Grant) and letters in the archive written to Elizabeth reference this role. Elizabeth also maintained communication with Mary Bowser. Previously, the last known traces of Mary were a series of letters written from February through June of 1867 to Gilbert L. Eberhart of the Georgia Freedmen's Bureau. This archive contains a later letter, dated October 31, 1870, written to "My Dear Mifs Bet" by "M. J. Denman." Though Denman is a surname not previously attributed to Mary, statements in the letter provide corroborating details such as age, education, and a clear prior relationship that coincide with known facts about Mary Jane Richards Bowser. In this intimate letter, Mary describes her present situation living in New York City, her struggle to make ends meet, and a plan to attend a normal school for teacher training. It is clear from the letter that the two women have maintained a close friendship. Mary writes, "I hope you will not loose sight of me. As I cannot bear the thought that no one is interested in my weal or woe....God bless you / Good night my dear friend / Yours affectionately / M. J. Denman."  Research has been conducted subsequent to discovery of this archive that has unearthed additional letters written by Mary Bowser using the name "M. J. Denman."

Insurance documents related to the Van Lew family home in Richmond, two Confederate $5 bills, a check signed "Eliza L. Van Lew," a Virginia Treasury note, and a ca 1870 broadside "An Appeal" relative to the "recent calamity of the Capitol of our State" (presumably referring to the April 27, 1870, collapse at the Virginia state capitol) round out the document collection. The broadside appeal is signed in type by four individuals including "E. L. Van Lew" who is identified as President of the Relief Association.

A small, velvet ca 1867 Protestant Episcopal Church "Book of Common Prayer" accompanies the archive. Though the Van Lew family did attend the historic St. John's Episcopal Church in Richmond, there are no identifying inscriptions or other marks in the prayer book. A gold locket, measuring approx. 1.125 in. diameter, accompanies the letters as well. Inside are two photographs of unidentified individuals. Engraved cursive initials on the front of the locket appear to read "KLN." While no definitive attributions can be made with regard to the prayer book or the locket, the items were discovered with the Van Lew correspondence.

Elizabeth Van Lew destroyed much of her correspondence following the war, and so her personal documents are exceedingly rare at auction. No signed manuscripts from Mary Bowser have come to auction previous to this offering.

Special thanks to historian Lois Leveen, PhD, for her assistance in authenticating the Mary Bowser/Mary Denman letter.