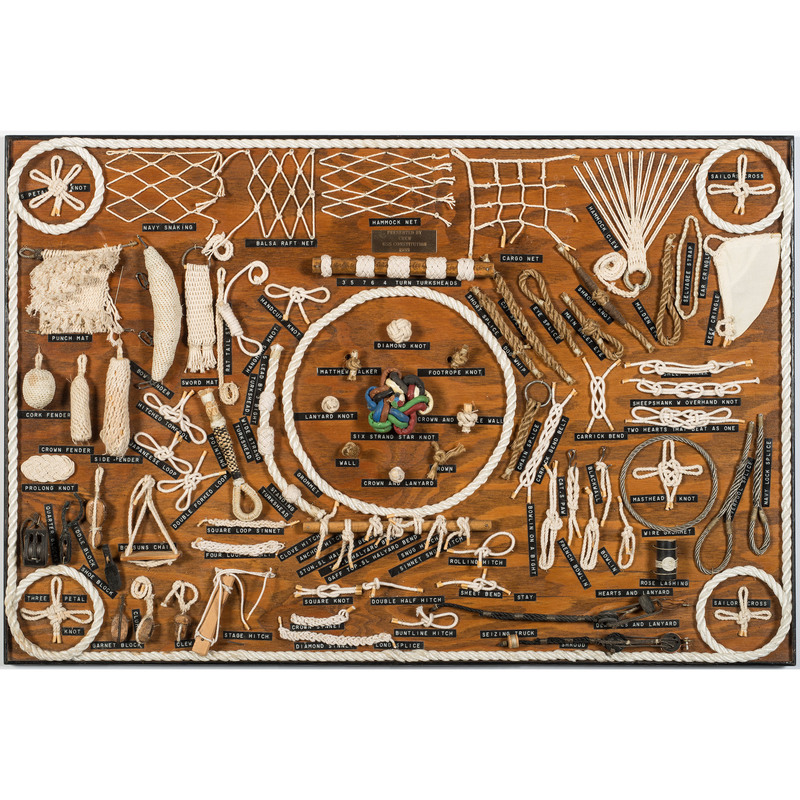 When Commander Sudholz retired as Commander of the USS Constitution on June 22, 1985 he had served as her captain longer than any other person (he took command of the Constitution on September 26, 1980). While in Boston he served as President of the Wardroom Club, as an officer on the Board of the Copley Art Society, the Armed Forces YMCA, the USO, The Freedom Trail Foundation, and as an Overseer of the USS Constitution Museum Foundation among others. At his retirement ceremony, the crew of "Old Ironsides" displayed their affection for "The Skipper" by presenting him with a custom, handmade display of 88 different sailors' knots, each hand-tied, labeled and mounted on a 24 x 36 in. board. The simple brass plate bears witness: "PRESENTED BY CREW USS CONSTITUTION 1985."

Herman Otto Sudholz (1934-2016) was trained in civil engineering, receiving his degree from Lehigh University. When he found himself facing the draft, he applied to Officer Candidate School at Newport, RI. Commissioned an ensign on May 1, 1959, his first four years were spent on the destroyer USS Johnson, including deployments to the Mediterranean and as a reserve for the blockading forces at Guantanamo Bay in 1962. He spent a couple years in ordnance R&D before returning to the sea and deploying to Vietnam aboard the USS Brister. He then spent another period on land before joining the destroyer Richard S. Edwards. Several shore assignments followed and a time aboard the destroyer tender Dixie as executive officer.

When he took command of the Constitution, he realized that he effectiveness was not what it could be, so he petitioned the Navy for an exemption to its alcohol prohibition aboard ship so she could be used for official and diplomatic functions (with alcohol allowed only during the events). He continued the ship's restoration and had some of the ship's company lead the 1981 inaugural parade. (ussconstitutionmuseum.org)

24 x 36.25 in. The knots on this board include varieties of netting, eyes, splices, Turk's-heads and related knots, matting, handcuff knot, hangman's knot and shroud knot, fenders, bowlins, blocks and many more. Some of them are made in wire rather than rope, these skills being useful even beyond the age of sail, though all of these important for the Constitution.

Second image shows board being presented to Commander Sudholz, but original photograph does not accompany the lot.