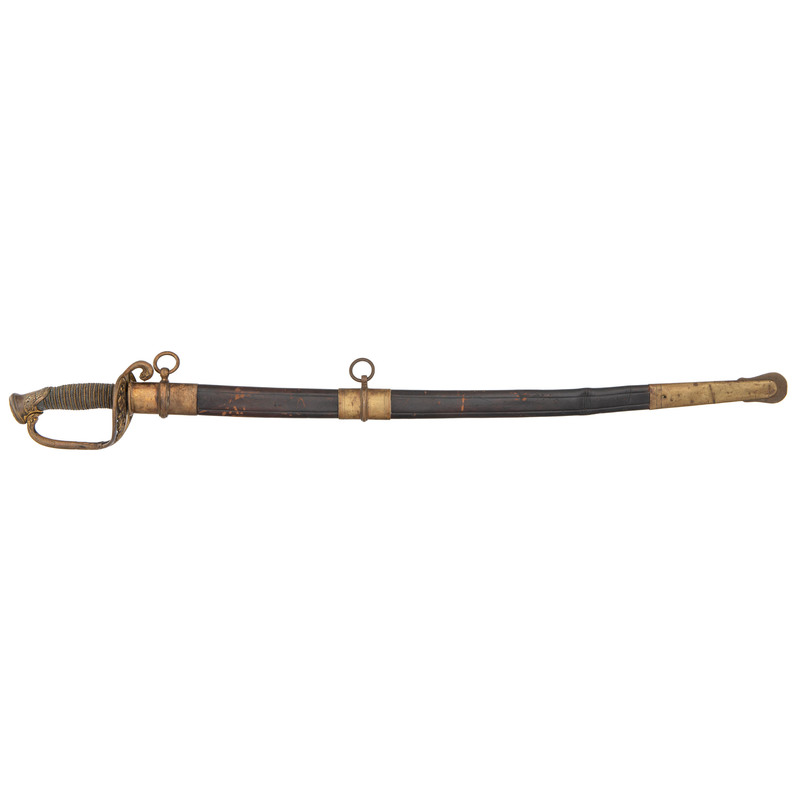 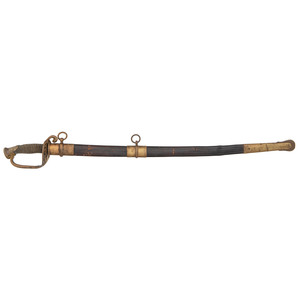 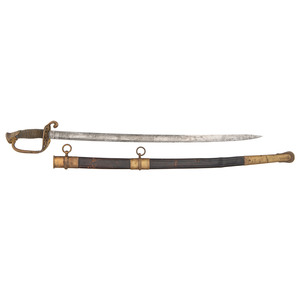 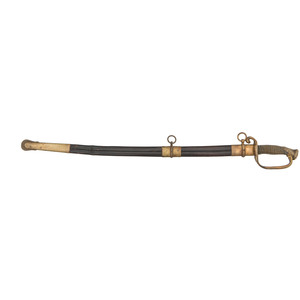 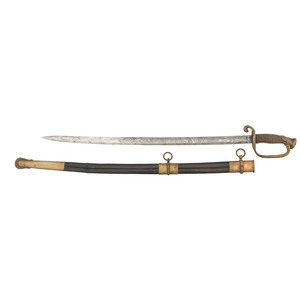 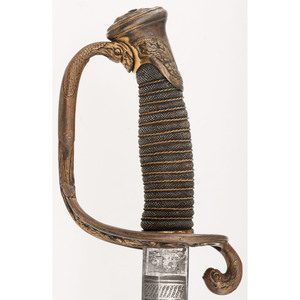 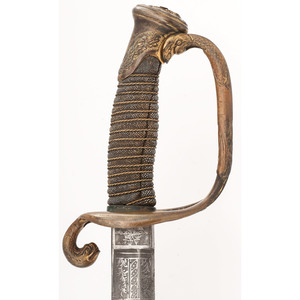 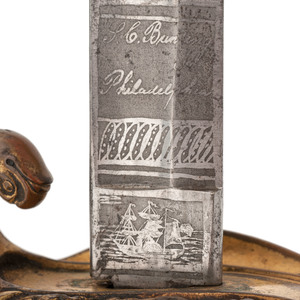 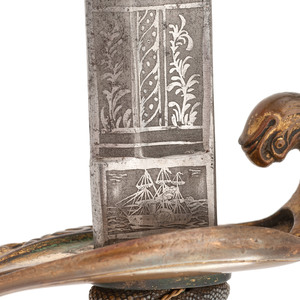 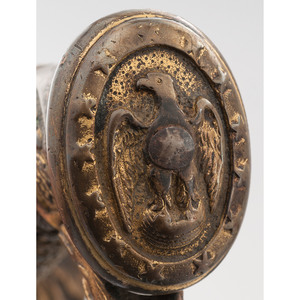 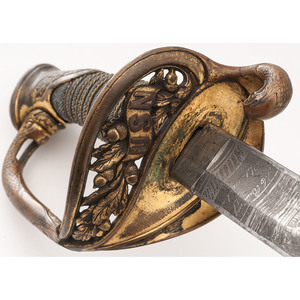 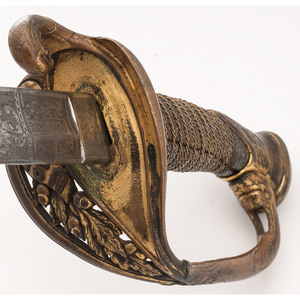 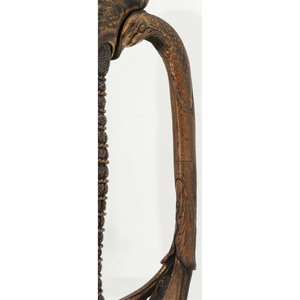 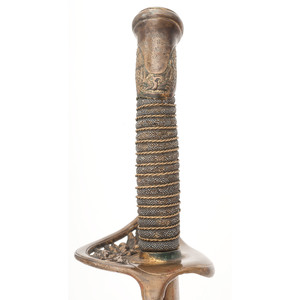 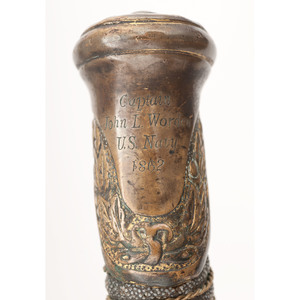 27.5" slightly curved single-edged blade, with 8" false edge, 18" wide stopped median fuller and 12" narrow fuller at spine. Cast brass guard with USN in a ribbon on its face, forward swept dolphin head quillon, acanthus leaf decorations on guard and around edge of pommel cap. Pommel cap cast with a droop-winged American eagle surrounded by 13 stars. 5.25" grip with grooved wooden handle covered by gray shagreen with 15 wraps of twisted brass wire. Blade etched with a bold USN on the reverse at center with fouled anchor and foliate scrolls, with E PLURIBUS UNUM in a flowing banner. Both ricassos etched with the image of a three-masted side-wheel paddle steamer. Obverse blade etched with a large central panel depicting a three-masted side-wheel paddle steamer, a three-masted sailing ship, and a crewed launch all around a four-sided island fort. Above the ricasso is large panel depicting two men in a pinnace, with both panels surrounded by foliate scrolls with a large furled American flag comprising the final panel nearest the tip. The retailer name S.C. Bunting / Jr. / Philadelphia is etched immediately above the obverse ricasso. The top edge of the pommel cap, along the spine of the grip is engraved in four lines: Captain / John L. Worden / U.S. Navy / 1862. Sword is contained in a brass mounted leather scabbard more appropriate to a US M1850 foot officer's sword that is a replacement. The scabbard has a pair of incised lines the length of the front, with center back seam and matching incised lines.

John Lorimer Worden was born in 1818 and was appointed a midshipman in the US Navy on January 10, 1834, and spent the next three years serving on the sloop-of-war Erie. He also served aboard the Cyane briefly and did a two-year stint at the US Naval Observatory between 1844 and 1846. He served aboard the Southampton during the Mexican-American War and spent the next decade at a variety of postings, including another two years at the Naval Observatory. In April of 1861, he was sent on a mission to communicate secret orders to US ships stationed off of Pensacola, and was subsequently captured in Alabama and spent about seven months as a prisoner of war in the Confederacy. Upon his release he was given command of the newly designed ironclad ship the USS Monitor. Worden officially took command on January 16, 1862, and supervised the completion and outfitting of his new ship. The Monitor was commissioned at the New York Navy Yard on February 25, 1862. On March 6, 1862, the USS Monitor, under Worden's command, was towed from New York towards Hampton Roads, VA where the former Federal ironclad gun boat USS Merrimack (re-christnened CSS Virginia by its Confederate captors) was heading towards a confrontation with the US blockading fleet. On March 8th, the Virginia successfully sank the USS Cumberland and USS Congress, and also damaged the USS Minnesota. The Monitor, under Wordan's command, did not arrive in time to become involved the battle on the 8th, but the following day the classic "Clash of the Iron-Clads" took place, with the Monitor spending some four hours locked in mortal combat with the Virginia. During the fight, Worden was wounded in the face by shrapnel and was forced to relinquish command to his executive officer. After the four hour contest, both ships broke off, with no clear winner in the fight. Following the historic first battle between two armored, steam powered ships, Worden was a national hero and was promoted to commander. He was presented with an exceptional Tiffany & Company sword by the state of New York that now resides in the US Naval Academy's museum. He was given command of the iron clad USS Montauk in late 1862, and spent the balance of his wartime sea service as part of the blockading squadron off the coast of South Carolina. He was promoted to Captain in 1863, and by the middle of that year was reassigned to help oversee the building of iron clad ships in New York. In 1868, he was promoted to Commodore and served as the commandant of the US Naval Academy from 1869 through 1874. In 1872, he was promoted to Admiral. He served out the remainder of his career at a number of assignments both at sea and ashore, finally retiring in 1886 after some 52 years of service. He died in 1897 at the age of 79.

Very good. Blade retains much of the bright polish and frosty echoing with the panels clear and well defined. The metal does show some scattered light surface oxidation and flecks of discoloration here and there with some minor loss of frosting as well. Guard with a nice, uncleaned mustard patina, wrap with some minor wear, wire present with some minor looseness. Blade to hilt junction is tight, throat washer is missing. Scabbard about good with a large crease in the leather above the drag, otherwise solid with scattered finish loss, scuffing, crazing and wear. Mounts with an uncleaned patina, drag missing its retention screw and is loose.