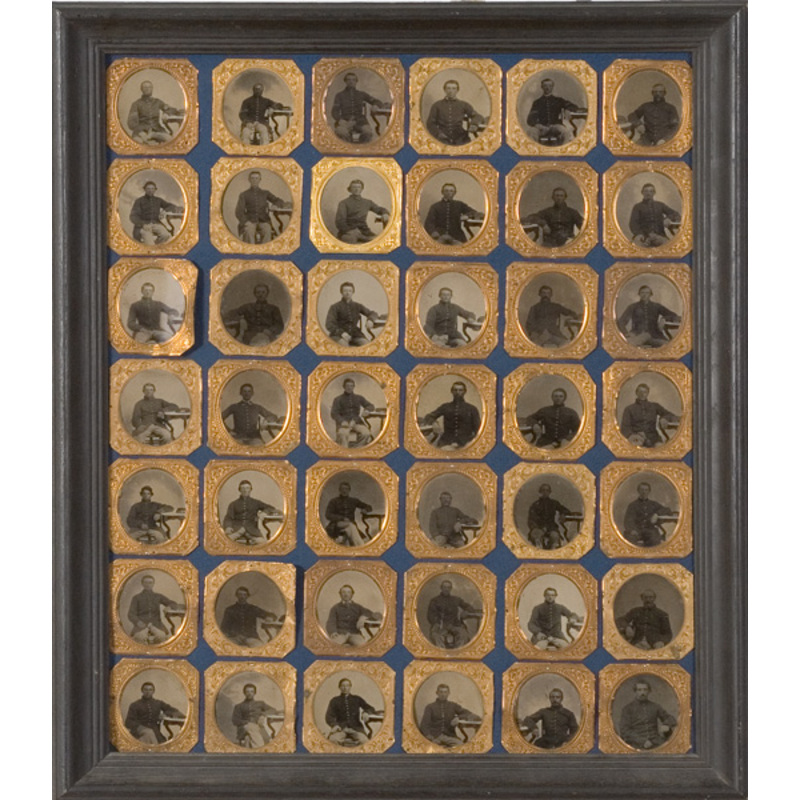 including two Sergeants, and three Corporals; the remaining are Privates. Each pose is identical, and all are seated at the same studio table, suggesting that the images were taken on the same day, by the same photographer. On many kepis the letter "G" or the numeral "48" is visible. Images retain brass preservers, lacking cases; mounted with pins in a period 21 x 27.5" walnut frame.

Archival research has identified Congressional Medal of Honor winner Private Robert A. Reid. His image is in the bottom row 2nd from right. Reid was awarded the CMOH for his actions at Petersburg, Virginia on June 17, 1864, when he captured the regimental flag of 44th Tennessee.

The 48th Pennsylvania Volunteer Infantry was composed entirely Schuylkill County, men. It was mustered into service for three years in September 1861, and was almost immediately detailed south, arriving at Hatteras Island, North Carolina, in November of that same year, remaining there until July, 1862 when it was transferred back north to Fort Monroe. The regiment participated in the battles of Second Bull Run, Chantilly, South Mountain, Antietam and Fredericksburg, fighting valiantly in every engagement and winning many compliments for gallantry. The regiment later suffered heavily in the Wilderness campaign.

At Petersburg the regiment participated in an assault on an outpost the I7th of June, in which Sergeant Patrick Monahan of Co. F and Private Robert Reid of Co. G received medals of honor for gallantry, and took part in the excavation of the mine that exploded on July 30. After Petersburg the regiment was stationed at Fort Sedgwick, where it remained until April 2, 1865, when it joined the assault on Fort Mahone, after which it occupied Petersburg and was detailed to guard prisoners, etc., until the middle of July, when it returned to Alexandria and was mustered out on July 17, 1865.

According to owner the images at one time hung in a central Pennsylvania GAR post. This photo group was the cover photo of Military Images Nov./Dec. 2003 and is the subject of an article in this same issue.

Condition:A few of the images have some scratches and some of the surrounds are bent, but overall this group is VG.