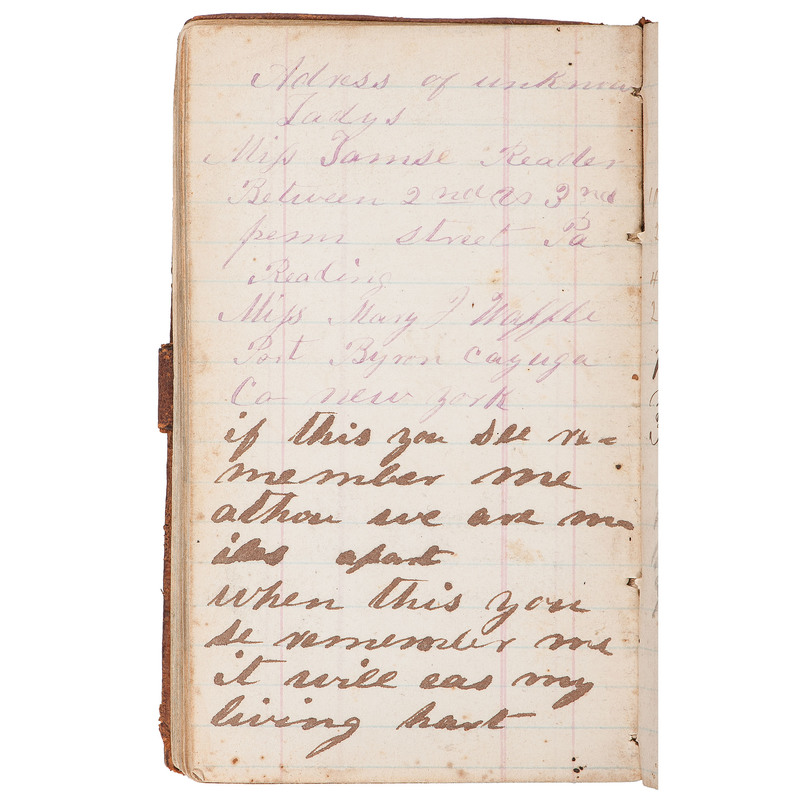 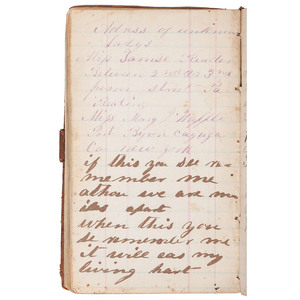 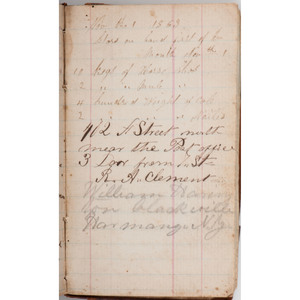 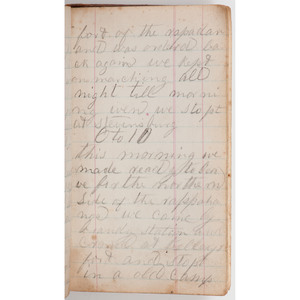 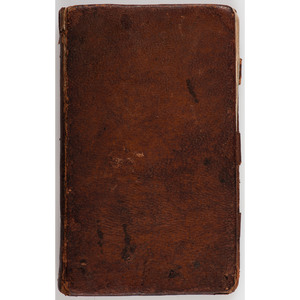 Leather pocket diary, 3 x 5 in., pages not preprinted. Entries date from September 1, 1863 to December 8, 1863. Diarist unknown. Many of the entries are short and always begins with observations of the weather. Entries in addition to this include mostly movements, not much battle content. So, in October 1863, the diarist notes movement to the (10th) Rapidan, then back to camp, then marching all night, stopping at Stevensburg; (11th) ready to move to north side of Rappahannock, then to Brandy Station, then Kelley's "fort"; (12) marching again all night for the 3rd night in a row; (13) marching for two hours before finding their train. The 17th found them at Fairfax Station; two days later they moved from Fairfax Station to Fairfax Court House to Centerville then crossed the Little Bull Run. The 20th they crossed the Bull Run by pontoon bridge and began moving to Warrenton, arriving there about 10pm. They remained at Warrenton for several days before being ordered to move again, but ended up returning the same day to Warrenton.

The writer seems to have been a blacksmith. He mentions getting a new forge early in the diary, and giving their old forge to another unit. A single page of inventory is included near the back that lists "Stors on hand first of the month Nov 1 - 10 kegs of Horse shoes / 2 kegs of mule shoes / 4 hundred weight of cole [coal] / 2 hundred weight of nails."

He also seems to be lending money to soldiers in the unit. By looking up some of the more uncommon names, there is a possibility that the writer is in the 17th PA Cavalry (which actually is written at the top of one of the pages, but some of the men listed are not on the 17th PA rolls). Members that were identified as part of this unit listed in the back of the diary are: Jeremiah Mumah (KIA 9-24-64); Michael Friend; and Lemuel Miller. There are also two John Rosses during the autumn of 1863 (a third joined in 1864) and Joseph Short. The diarist mentions Lieutenant Reinhold. Reuben R. Reinhold was one of the organizers of the unit. An additional subject referenced is Darius Stiles, who served with the 6th NY Cavalry.

Pacivilwar.com lists the blacksmiths for the 17th Cavalry as Levi Wentz, Daniel Derr, and John Martz, although the identity of the soldier that penned this diary cannot be confirmed.

Leather of cover is flaking, especially on spine. Pages with some foxing and staining, not unexpected for a field diary. Block of pages still tight.