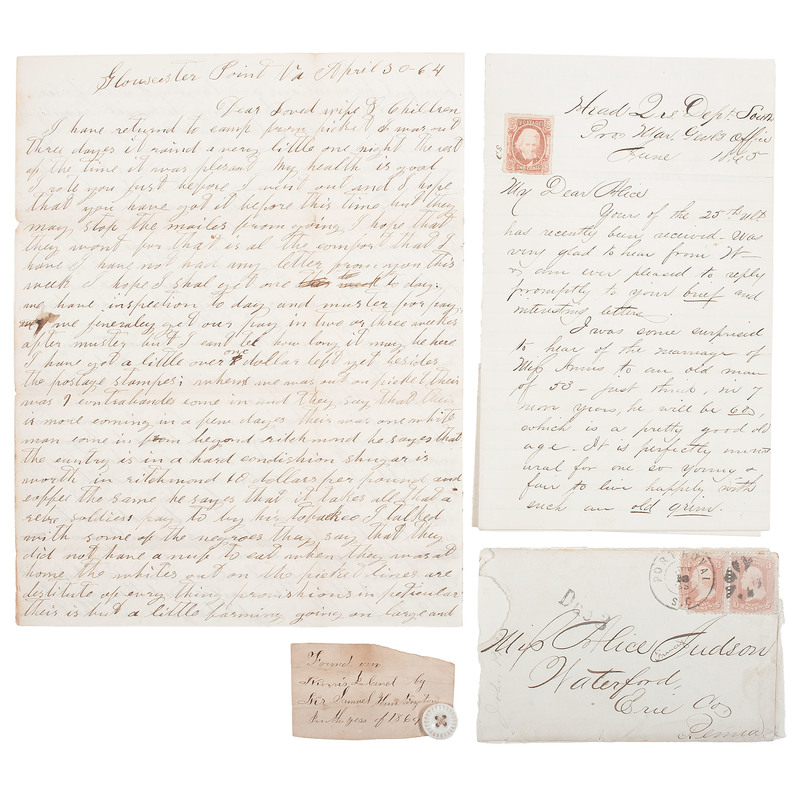 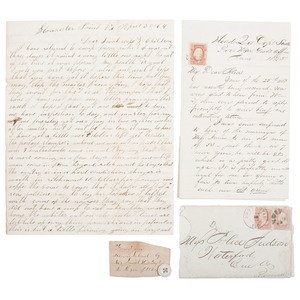 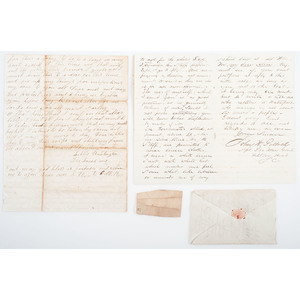 Huntington, Samuel. ALS, 4pp, 7.5 x 9.75 in., "Gloucester Point, Va." April 30, 1864. Addressed to "Dear Loved Wife & Children." Huntington primarily bemoans the conditions of war, writing in part: "There was one white man come in from Richmond. He says the country is in a hard condition. . . it takes all that a Rebel soldier's pay to buy his tobacco. I talked with some of the Negroes. They said they did not have enough to eat when they was at home. The whites out on the picket lines are destitute of everything, provisions in particular. There is but a little farming going on, large and beautiful plantations are laying & idle. . .splendid buildings destroyed. . . This was a splendid country once. All is gone to waste. . . They are reaping the benefits of their secessionism." On a separate piece of paper, 2.5 x 1.5 in., Huntington has attached a small white button that he found on Morris Island, SC. Unfortunately, fifteen days after sending this letter, Huntington was captured at the Battle of Drewry's Bluff, VA, May 16, 1864. He contracted an illness while in prison and died in the Parole Camp in Annapolis, MD on December 21, 1864.

Pollock, John W. ALS, 9pp, 5 x 8 in., Hilton Head, SC. June 18, 1865. Addressed to "Miss Alice Judson," with original cover. Alice appears to be a friend, with whom Pollock discusses the recent nuptials of several mutual acquaintances and his own matrimony plans, or lack thereof: "if I should want to marry soon & there be no possibility of a chance elsewhere, I think I should do the high strategy on the accomplished daughter of some luxuriant & wealthy old planter. There are many fine 'Gids' who have bestowed upon officers of this command, their pleasant smiles, since last Oct." He also mentions a recent trip to Savannah, which he found to be a "most lovely old city." However, he resumes his ruminations on marriage, noting that he "saw some very pretty young ladies also. But upon the whole, I will give Charleston the preference on the lady question." At the top of the letter, Pollock affixed an unused two-cent orange Confederate stamp, "CSA 8" with portrait of Andrew Jackson.