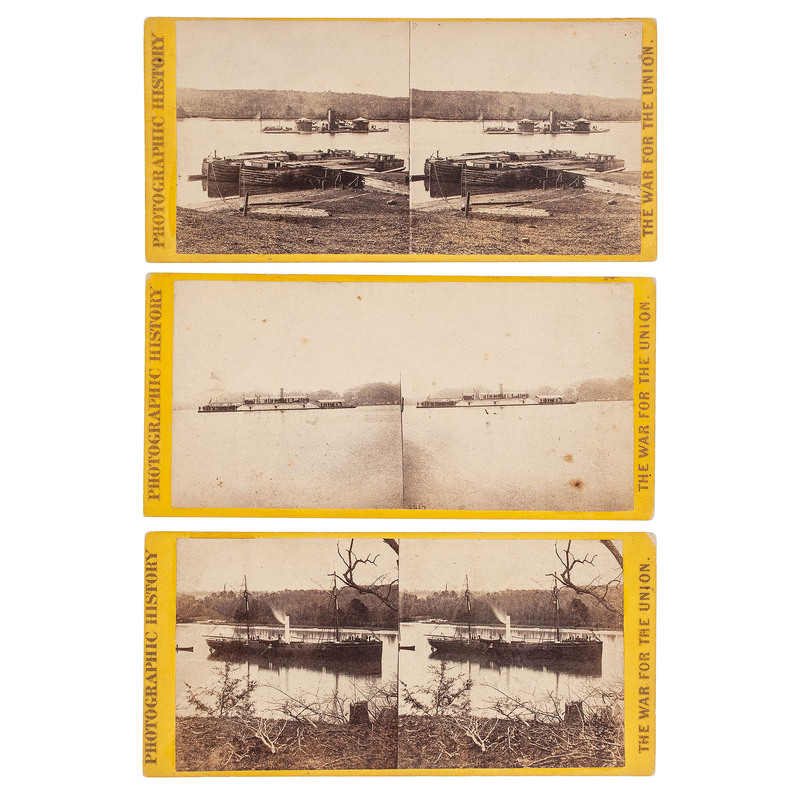 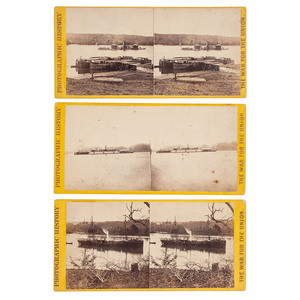 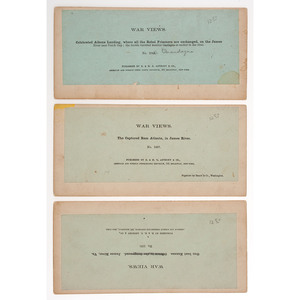 No. 2467 titled "The Captured Ram Atlanta, in James River" with original negative credit to Brady.  The scene at some distance showing the former Confederate ironclad in profile with her Union crew standing-to for the photograph.  The casemate ironclad Atlanta had been converted in situ at Savannah from a blockade runner and commissioned into the Confederate Navy in November 1862. Plagued by design flaws - overweight and under-powered - she was rather quickly reported by an officer as a "comfortless, infernal and God-forsaken ship."   Atlanta finally sortied on June 17, 1863 to attack the Union base at Port Royal but was quickly engaged by two shadowing monitors, USS Weehawken and USS Nahant.  The aggressive Atlanta fired the opening shot from her bow gun directed at Weehawken but missed.  Soon after, she quickly grounded hard on a sand bar as the pair of monitors closed the range  Several large caliber shots from Weehawken then caused damage and casualties among the crew of the stranded warship.  Within fifteen minutes of firing the first of just seven shots Atlanta struck and surrendered.  Although the battle damage was slight Atlanta underwent extensive repairs before recommissioning into the Union Navy in February 1864.  Under the stars and stripes she retained her name and was assigned to the North Atlantic Blockading Squadron.  USS Atlantic spent the balance of her career with the James River squadron primarily engaged in operations against Richmond.  She was decommissioned in June 1865 and later sold out of naval service.  In December 1869 as a civilian vessel she disappeared with all hands bound for Port-Au-Prince, Haiti.

No. 2543 captioned: "Celebrated Aiken Landing, where all the Rebel Prisoners are exchanged on the James River near Dutch Gap; the double turreted monitor Onondaga at anchor in the river."  Onondaga rests peacefully at anchor in the middle of the placid James River airing her crew's laundry thereby reflecting the totality of her short career.  the USS Onondaga was a double-turreted river monitor commissioned in March 1864.  She served with the James River Flotilla covering the water approaches to Richmond and was engaged in a bombardment action only once during the war.  In 1867 she was sold to the French Navy and thereafter served as a coastal defense ship.

No. 2691 with a short caption: "Gun boat Kansas.  Officers in the foreground (scratched out in pencil). James River, Va."  USS Kansas was a innovative screw steam gunboat commissioned in December 1863 and assigned to the North Atlantic Blockading Squadron, stationed at Wilmington, North Carolina.  Here, she patrolled and successfully captured or caused the destruction of several Confederate blockade-runners.  Notably, on May 6, 1864 Kansas and her sisters engaged the Confederate ironclad ram CSS Raleigh who had steamed over the bar at New Inlet to engage the Federal blockaders. "Withering fire" caused Raleigh to turn and withdraw whereupon she grounded on the bar and broke her back.  She was then burned by her crew to prevent capture.  Kansas later supported the first attack against Fort Fisher in December 1864.  She joined the James River Flotilla in February 1865 in support of Grant's operations to isolate Richmond and on several occasions bombarded Confederate positions near Petersburg.  Having proven her versatility, Kansas was retained in the austere post-war navy and was not decommissioned until July 1875.  She was later sold out of service in September 1883.

All three flat stereoview in VG. condition showing only minor edge wear at the corners.  Clarity and tonal quality are uniformly strong. Applied blue printed captions on verso complete with minor soiling with a small tear to the bottom of No. 2543.  Two views with penciled annotations.  No revenue stamps on verso.