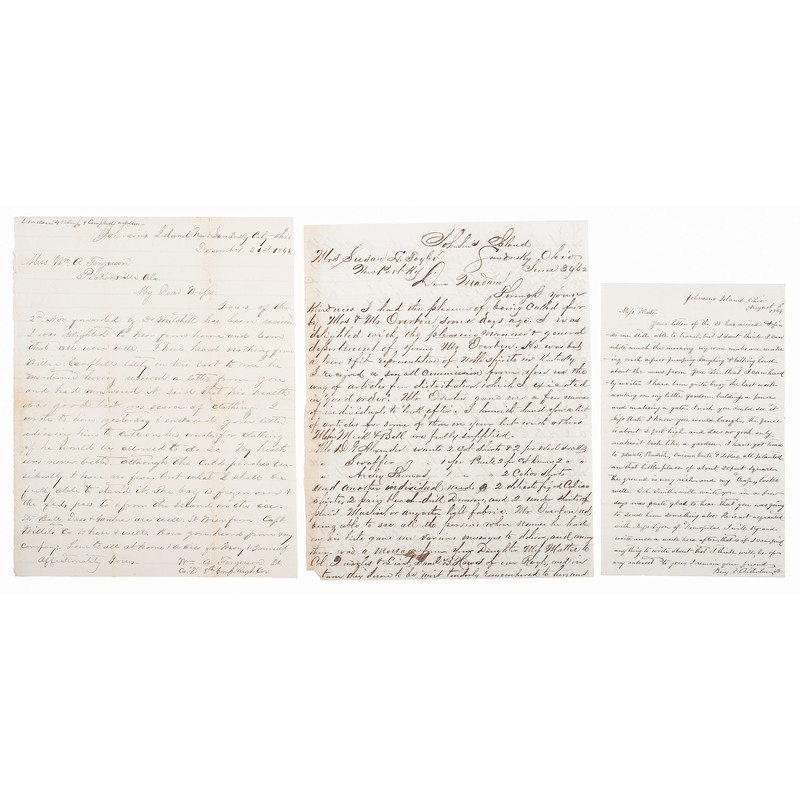 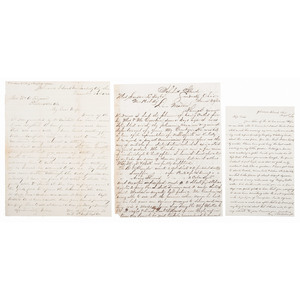 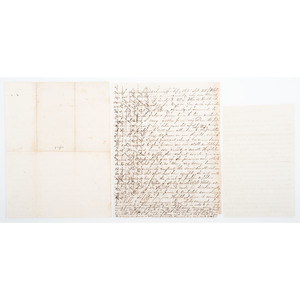 Lot of 3 letters written by Confederate soldiers imprisoned on Johnson's Island, 1862-1864. Prisoners' letters were limited to one page in length, but each is rich with details about the activities of fellow inmates and the conditions of life on the island.

Chisolm, Lieutenant Benjamin F. (1844-1903). ALS, 1p, 4.75 x 8 in., "Johnson's Island, Ohio." August 3, 1864. Addressed to "Miss Kate." Chisholm, of Woodville, MS, enlisted with the 16th Mississippi Infantry at the age of 16. He writes, "My room mates are making such a fuss, jumping & laughing & talking loud about the news from Gen. Lee that I can hardly write. I have been quite busy the last week working on my little garden, building a fence and making a gate. . . I have got tomato plants, radish, onions, beets & lettuce, all planted on that little place of about 20 feet square."

Ferguson, Lieutenant William A. ALS, 1p, 7.75 x 10 in., "Johnson's Island Near Sandusky." December 21, 1863. Addressed to his wife, Mrs. William A. Ferguson. Originally from Pickensville, AL, Ferguson was a member of Company D, 8th Confederate Regiment Cavalry (also known as the 2nd Regiment Alabama and Mississippi). He was captured at Shelbyville on June 27, 1863 and writes home with descriptions about life on Johnson's Island: "My health was never better although the cold pinches considerably. I have no fears but what I shall be fully able to stand it. The bay is frozen over & the Feds pass to & from the Island on the ice. Lts. Ball, Daso, & Gardner are well. Lt. Wier from Capt. Willet's Co. is here & well. Have you heard from my Company?".

Horne, Lieutenant T.M. ALS, 1p, 7.75 x 9.75 in., "Johnson's Island Sandusky Ohio." June 30, 1862. Addressed to Mrs. Susan L. Taylor of Newport, KY. A member of Company A, 2nd Kentucky Infantry, the so-called "Orphan Brigade," Horne writes to Taylor listing the needs of several soldiers and describing the living conditions at the prison. Taylor operated a ministry that sent items to prisoners for distribution. He specifically highlights the "Sanitary condition of [the] prison," noting "we have 29 cases in our hospital, some of whom are sick of typhoid fever, and others of less serious diseases. The rations issued to these persons are not at all suitable for sick men, and hence we raised a small hospital fund with which to supply their actual wants. . . If in your power to contribute something in the way of supplies for our hospital, I know it would be a balm to suffering humanity." He ends positively, describing a newfound interest in handcrafts: "Like many others here, I have imbibed passion for the Fine Arts and. . . have whiled many wear hours in ring-making." Horne was exchanged later in 1862 but was wounded on December 7, 1862 in Hartsville, TN and died two days later.

One strip of staining along the left edge of the Horne letter (as though kept in an album). Some toning and expected creasing to the Ferguson letter.