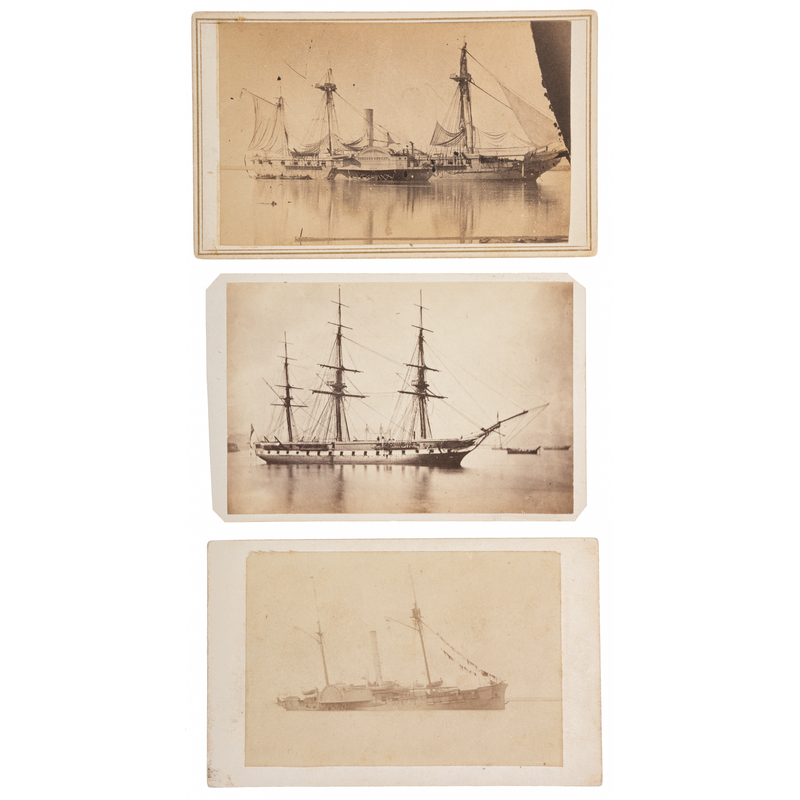 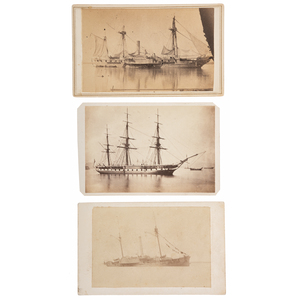 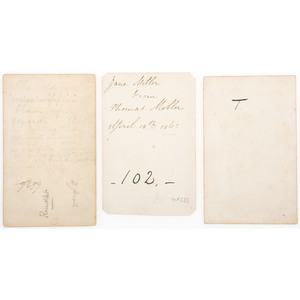 Lot of 3 CDVs. Carte of unidentified three masted sailing frigate. Uncredited: n.d. She could be a warship representing either the Potomac-class or Sabine-class although there are only 16 guns (per side) visible, fewer than the Potomac's or Sabine's normal complement. Oddly, the becalmed ensign at the ship's stern does not appear to be the familiar stars and stripes, rather the while ensign of the Royal Navy. Still, the style of the date inked on verso, month and then day, follows the American colloquial versus English.

The second vessel is a river side-wheeler with a tall, raked funnel in between two canted masts.  Large caliber pivot guns are visible for and aft.  The vessel is unidentified and the CDV bears neither inscription nor back mark.

Third image is the familiar profile of the paddle frigate USS Mississippi first commissioned in December 1841.  A lengthy period pencil inscription on verso reads in part, "The old/Mississippi/blown up/March 1863/in fighting..."  Also on the back is the name "Rundlet," a four digit number, and "two prints" all written in a different hand.  A veteran of Perry's Expedition to Japan, Mississippi joined the blockade off Key West in June 1861 and was successful in capturing a schooner, later in November taking a British flagged bark in off New Orleans.  She then reported to Farragut for operations against New Orleans engaging Forts Jackson and St. Philip on March 24, 1862, and here ramming and destroying the unique Confederate turtle-ram Manassas "with two mighty broadsides."  While attempting to run Confederate batteries at Port Hudson on March 14, 1863, the deep draft Mississippi grounded and was taken under intense cannonade.  Captain Melancton Smith and his executive officer George Dewey (of later Manila Bay fame) tried valiantly to refloat her but to no avail.  Smith ordered her machinery destroyed, the guns spiked before she was fired to prevent capture, blowing up and sinking. Sixty four men were killed while 223 survived. Three of Mississippi's crew were later award the Navy Medal of Honor for their courageous actions during the ordeal.