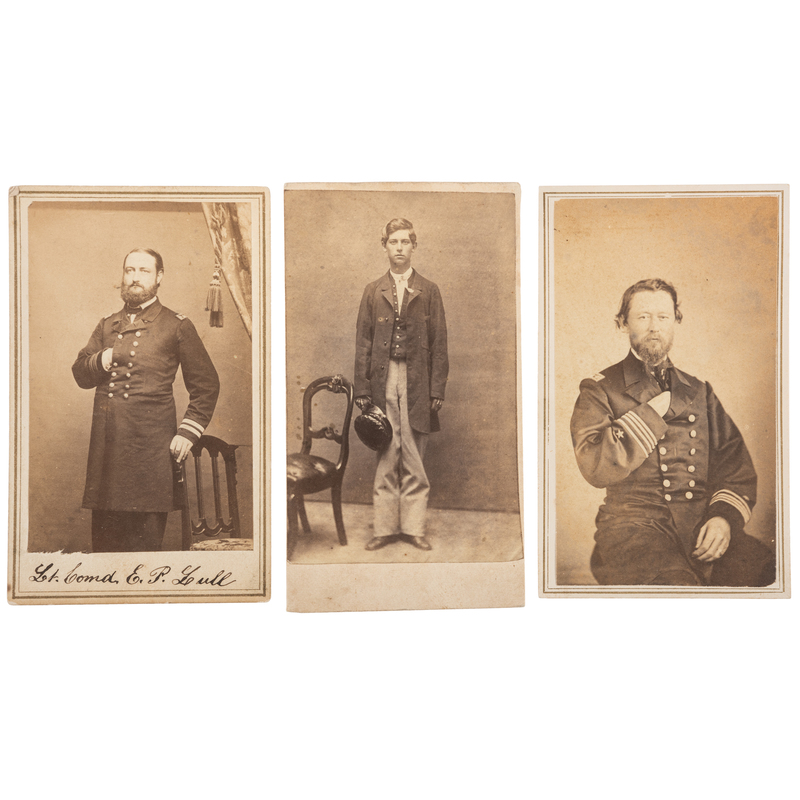 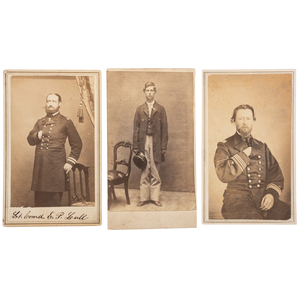 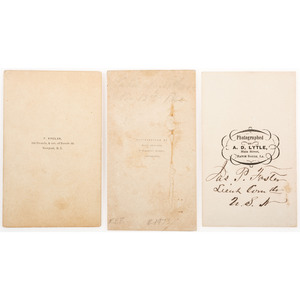 CDV portrait of a lieutenant commander (1864 Regulations). A.D. Lytle: Baton Rouge, LA, n.d. Ink signed on verso "Jas. P. Foster / Lieut Comdr / USN." James P. Foster: midshipman 5/14/46, passed midshipman 6/10/53, master 9/15/55, lieutenant 9/16/55, lieutenant commander 7/16/62, commander 7/25/66, died 6/2/69. This officer first served during the Mexican War aboard the ship-of-the-line Ohio having participated in the landings at Vera Cruz and the Tuxpan River expedition. As lieutenant commander, Foster was captain of the ironclad river gunboat USS Chillicothe and commanded her during the aborted Yazoo Pass expedition where the ship was badly damaged under the guns of Fort Pemberton. When during the operation the squadron commander became indisposed, Lieutenant Commander Foster assumed overall command and oversaw the successful withdraw of the combined Federal flotilla. In September 1863, Foster took over the large river ironclad USS Lafayette and commanded her until the end of the war. Post-war, Commander Foster was given the USS Osceola on the Brazil Station but contracted a tropical disease and died stateside in June 1869.

The Richard B. Cohen Civil War Collection Lots 133-162 Cowan's is pleased to offer the first contingent of an unparalleled assembly of Brown Water Navy images archived over a lifetime of study by consummate collector Richard B. Cohen, a familiar name to many in the field of Civil War photography. To those who knew him best, Richard B. Cohen will be remembered as a "disciplined collector who maintained a relatively narrow focus having built an important, perhaps unsurpassed collection in his area of specialization." Richard was particularly well read and his historical knowledge informed his collecting as reflected by the photography that follows. The array of carte-de-visites and albumen photographs gathered here include a number of identified naval officers - both famous and obscure - along with a handful of enlisted sailors and Mississippi Marine Brigade images, and, significantly, many views of unique Brown Water Navy sidewheel and sternwheel warships - no two vessels looking exactly the same. Subjectively, the most appealing aspect of the Cohen Collection are the photographs of these gunboats, transports, and impressed vessels quickly converted at St. Louis, Cairo, and Cincinnati for duty on the waters of the Mississippi River and its tributaries. The gamut of improvised warships range from the earliest types of steam powered vessels first taken up by the Army to create a small timberclad flotilla, to the several purpose-built War Department Ellet rams, and later, the more numerous classes of tinclads, some converted but all built for and crewed by the Navy. A few captured Confederate vessels impressed into Union service are also present. It is supremely evident that Richard B. Cohen's collecting instincts were always evolving, but uniformly refined. We trust that both advanced and neophyte collectors will find something to pique interest now that the time has come to inevitably recycle these exceptional images to a new cadre of aficionados.