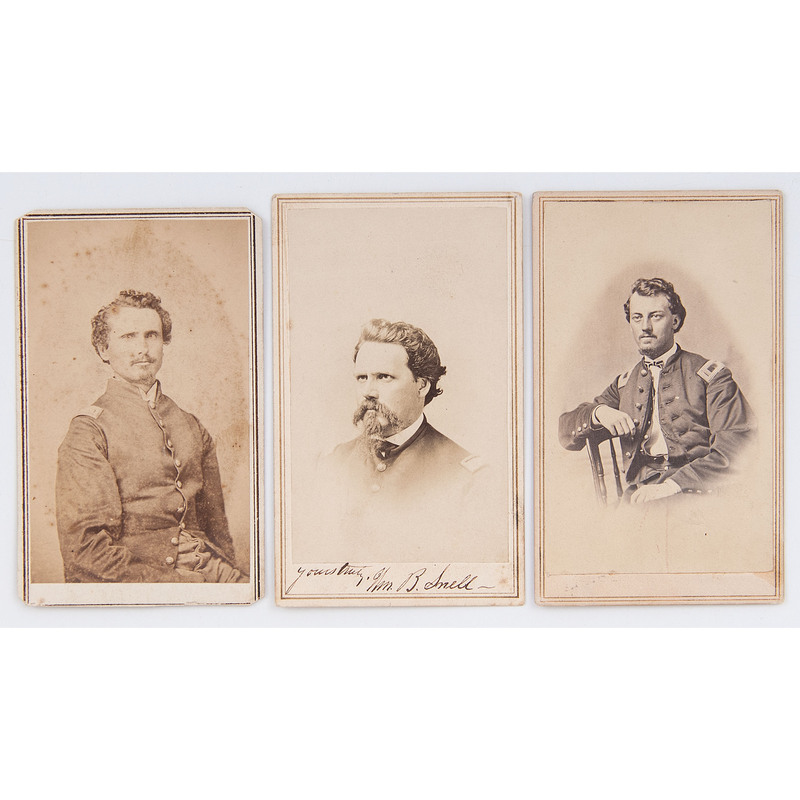 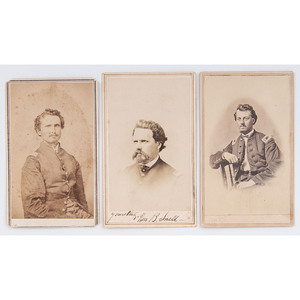 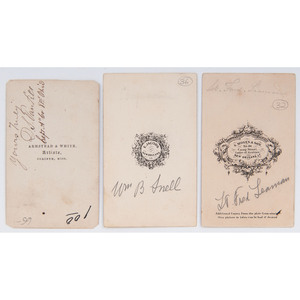 A fine portrait of a casually posed first lieutenant identified twice in pencil (both period hand and later hand) on verso as "Lt. Fred. Leaman" with imprint of "S. Moses & Sons, New Orleans, LA."  The first lieutenant straps are unusually large! Frederick E. Leamon enlisted in Co. I, 8th New Jersey Infantry as 1st Sergeant on 9/13/61 and resigned 8/13/62 as "2nd Lieutenant" (confirmed in Volunteer Register, Part 2, p.718). Based on the photograph Leamon was engaged falsifying his rank, or his anticipated promotion to 1st lieutenant was never confirmed.  Moreover, the 8th NJ was strictly an Army of the Potomac outfit that never saw service in the Department of the Gulf.  Thus, the New Orleans back mark is puzzling but perhaps along with the discrepancy in rank the basis of an interesting story.

CDV of seated captain inked on verso diagonally, "Yours Truly/D. S. VanPelt/Capt A"Co 81st Ohio" having desirable "Armstead & White, Corinth, Miss." back mark. The image is striking because it was oddly posed - the captain's hands appear to be cut off! David S. VanPelt enlisted as a Private in Co. A., 81st OVI on 7/31/62 and quickly advanced to 1st Lieutenant on 10/15/62, then to Captain Co. F. on 5/9/64, and m/o with the regiment on 7/13/65. The regiment was originally organized under the auspices of General Fremont as Morton's Independent Rifle Regiment. Until April 1863 it was assigned to the District of Corinth before alternating between the 17th/16th/15th Corps in the field for the duration. The 81st OVI would fight at Shiloh, Corinth, against N.B. Forest, the many battles of the Atlanta Campaign,  Jonesboro, Lovejoy Station, Sherman's March to the Sea, Savannah, and the Carolina Campaign paying a human price of 62 killed and mortally wounded.  Captain VanPelt having witnessed the entirety of the war and survived.

A sharp portrait vignette ink signed "Yours truly/Wm. B. Snell" with "E. Jacobs, New Orleans, LA." imprint. The mustachioed Snell joined on 11/28/61 as Captain, Co. B, 13th Maine Infantry, M/O in the same rank on 1/6/65. The 13th Maine was assigned to the Department of the Gulf in July 1862 and served in garrison and with both the the 19th and 13th Corps in the field including duty in distant Texas.  The regiment march during the Red River Campaign and engaged in fighting at Sabine Cross Roads and Pleasant Hill before transferring back east.  Henceforth, the regiment joined the Army of the Shenandoah but saw no significant action, ending the war as garrison troops in West Virginia before mustering out on January 5, 1865.  Captain Snell is noted as having been detailed to Maine (probably on recruiting duty), "on detached service" in 1863.

All three cartes undamaged and rate near VG. with wear commensurate with age.  VanPelt CDV with corners slight clipped.