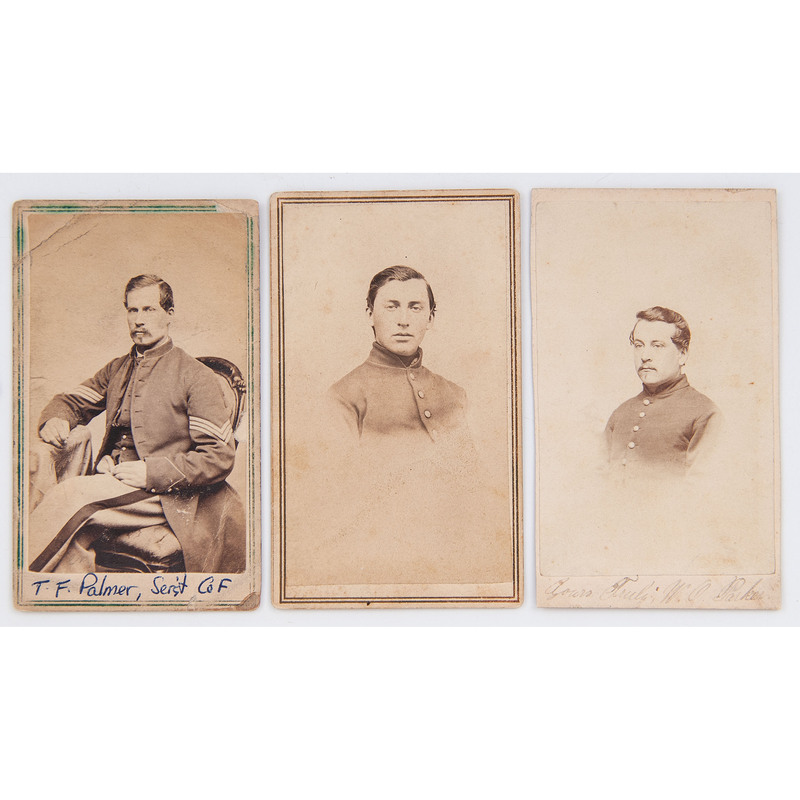 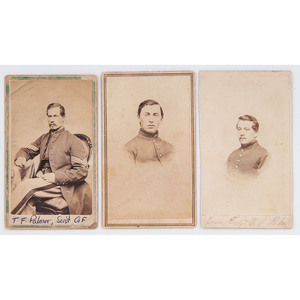 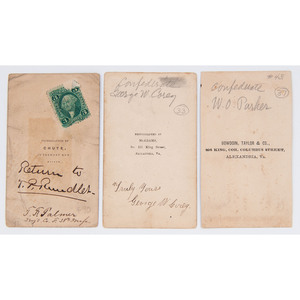 A vignette ink identified on verso, "Truly Yours/George W. Corey" photographed by "McAdams, Alexandria, Va."  Note that the carte had been wrongly attributed as "Confederate" in modern pencil. George W. Cory of Co. G., 11th New York Cavalry (Scott's 900) enlisted as a Private on 2/22/62; reenlisted as Veteran 2/29/64, promoted Corporal 11/1/64, promoted Sergeant 4/8/65, M/O 9/30/65.  The New York City raised regiment was assigned to the District/Department of Washington, D.C. engaged primarily in garrison duty in the Washington Defenses until transferred to the Department of the Gulf in April 1864 as part of the Cavalry Division. The regiment participated in a number of company and battalion strength expeditions and skirmishes before being ordered to Memphis in February 1865 where it was mustered out on September 30, 1865.  The 11th New York Cavalry lost 23 killed and mortally wounded during the war.

Carte misidentified as "Confederate" but actually a vignette of a Massachusetts private who autographed his likeness, "Yours Truly, "W.O. Parker" in fine ink hand, now faded, with back mark of "Bowdoin, Taylor & Co./Alexandria, Va."  Walter O. Parker enlisted as Private, Co. H., 34th Massachusetts Infantry on 7/23/62.  He is noted as a musician and M/O 6/16/65.  The 34th Mass. was part of the Washington Defenses until moving to West Virginia in December 1863 where it performed intermittent garrison duty at Harper's Ferry before joining Sheridan in the Shenandoah during July 1864. The 34th was heavily engaged during the Valley Campaign including the battles of Opequan, Winchester, Fisher's Hill and Cedar Creek that defeated General Early. The regiment was then posted to Bermuda Hundred via Washington and took up seize operations against Richmond and Petersburg.  Emerging from the trenches the army unleashed a general assault on Petersburg and quickly joined in the pursuit of Lee during the final Appomattox Campaign, witness to Lee's surrender.  The regiment then performed occupation duty at Richmond until mid-June and mustered out June 16, 1865 having lost 135 men to death in combat.

CDV of another Bay State soldier identified in ink as "T.F. Palmer/Sergt. Co. F. 38th Mass." with imprint of "Chute, Boston" having green three cent revenue stamp.  The likeness is marred by a modern ball point identification beneath the portrait on the mount.  Thomas F. Palmer enlisted from Boston on 8/15/62 as a Private in Co. F., 38th Mass., promoted to Sergeant (date not given), listed as wounded at Winchester 9/19/64 (as Sergt.), M/O 6/30/65 at Savannah.  The regiment shipped out for the Department of the Gulf in November 1862 assigned to the 19th Corps. A number of expeditions followed culminating with the siege and twin assaults on Port Hudson during April-July 1863, sustaining particularly heavy causalities during the second assault on June 14.   Then followed the disastrous Red River Campaign in which the regiment was but lightly engaged.  In June 1864 the 38th Mass. returned east via Fortress Monroe and joined the Army of the Shenandoah under Sheridan as reinforcement.  The regiment would participate in significant fighting opposed to Jubal Earlys' detached Corps, being in the thick of combat during the chain of battles at Opequan, Winchester, Fisher's Hill and Cedar Creek.  The regiment was then once more transferred to Savannah as garrison troops, thence to various points along the North Carolina coast before returning to Savannah where it mustered out June 30, 1865 having suffered 77 killed and mortally wounded.

Cory and Parker CDV's both near VG. with expected light wear and soiling. The Palmer carte is only about G. with a bend upper left and damage to the lower right corner, also bleeding along the lines of the double green border, and partially torn tax stamp.