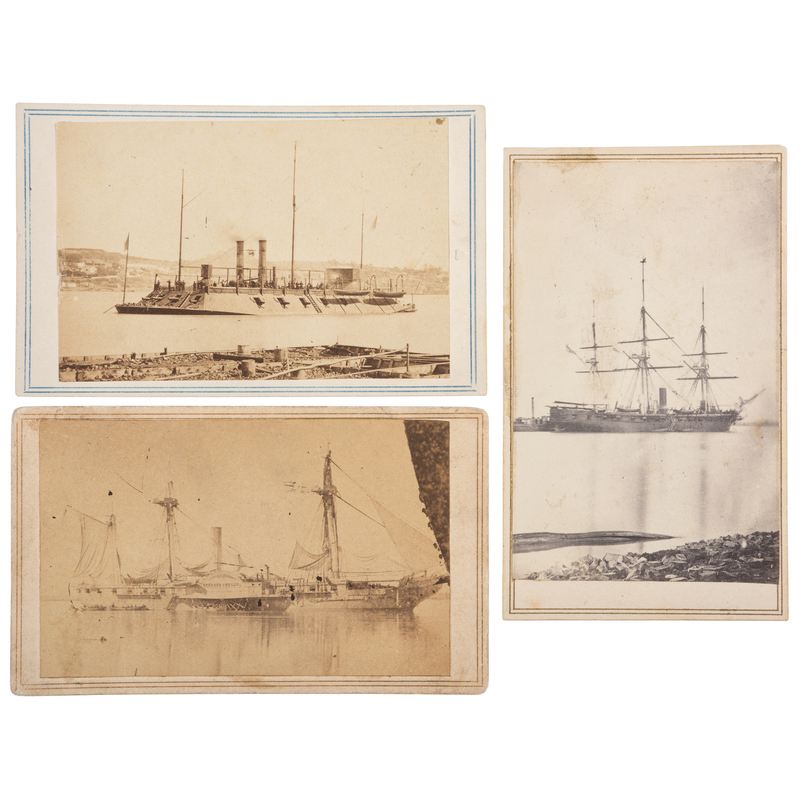 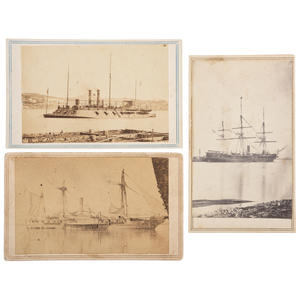 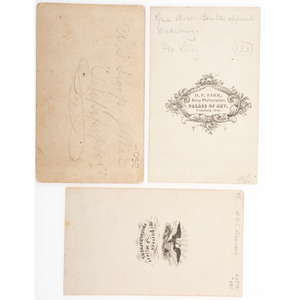 Lot of 3 CDVs. View of the ironclad river gunboat USS Benton with pencil annotation on verso reading, "Gun Boat Benton opposite/Vicksburg/For Lucy." D.P. Barr: Vicksburg, MS, n.d. The USS Benton was taken up from the civilian trade, converted into a warship named after Senator Thomas Hart Benton of Missouri and commissioned on February 24, 1862 into the Army's Western Gunboat Flotilla. One of that fleet's heaviest armed warships, she spent her entire career as the flagship of the Brown Water Navy hosting both Admirals David Porter and Andrew Foote. Benton first steamed into action at Island No. 10 during March-April 1862 followed by a fight at Plum Point Bend on May 10 where USS Cincinnati and USS Mound City were ambushed and sunk. Reinforced by Colonel Charles Ellet's flotilla of gunboats on June 6, Benton and her consorts engaged and routed a small Confederate squadron at the Battle of Memphis. In July, Benton led a contingent to attack the Rebel ironclad CSS Arkansas near Vicksburg without success - low water during the high summer forced the shallow draft vessels to withdraw to deeper water above Vicksburg. In October 1862 the navy assumed command of all military vessels on the Mississippi with Benton assigned to patrol duty on the Yazoo River. During the opening stage of the Vicksburg Campaign in April 1863, Benton "led a nighttime charge past the guns" of the river bastion and was hit at least five times by Rebel batteries, one shot a large 10" shell that "split her casemate" causing casualties. Later in the month Benton steamed with seven ironclads to bombard enemy shore batteries at Grand Gulf, Mississippi. Once more a Confederate shell penetrated Benton's armor this time accounting for 25 men wounded. The Mississippi's reliably hazardous current then overwhelmed Benton's engines and she was swept downriver as the Federal bombardment continued. Benton returned to station off Vicksburg in May and maintained the intense cannonade of the besieged city until it finally capitulated on July 4. In April 1864, Benton participated in the ill conceived Red River Campaign, the unstated objective of which was to acquire a large supply of cotton to sell to Northern speculators while not so coincidentally lining the pockets of a handful of complicit federal officers. At Shreveport, Benton fired a volley from her forward battery during the attack on Fort DeRussy causing the fort to quickly surrender. The broader Red River campaign having quickly come apart, the army lurched into a disjointed retreat while the Navy found itself once more dangerously stranded by low water. Only by means of an incredible engineering feat - involving sluice dams constructed at low points in river - was the Navy able to "escape on the rush of high water." By 1865 the war was nearly over for the Brown Water Navy. USS Benton's last mission was a return to Shreveport in June to take possession of the surrendered ironclad CSS Missouri. The illustrious Benton was decommissioned at Mound City on July 20, 1865, stripped of armor and guns and sold out of service on November 29, 1865.

CDV of paddle steamer in profile identified on verso in period pencil, "US Sloop of War/Mississippi." Uncredited: n.d. The US Gunboat Mississippi survived the passage of the forts below New Orleans, but was lost in March 1863 in Admiral Farragut's attempt to pass the Confederate guns at Port Hudson.

CDV of steam sloop USS Richmond. McPherson & Oliver: New Orleans, LA, n.d. USS Richmond was newly commissioned in 1860 and saw extensive service on western waters during the Civil War.  She joined the Mississippi River blockade and participated in early operations against New Orleans being surprised at night by the ram CSS Manassas and the Confederate Mosquito Fleet in a battle known as the Head of Passes on October 12, 1861. While taking on coal Richmond was rammed by Manassas and slightly damaged before getting off a broadside on the Confederate ship. A second attack by fire ships and escorts was beaten off. In April 1862, Richmond joined in the six-day bombardment of Forts Jackson and St. Philip running past the twin bastions and later engaged and defeated the Confederate flotilla on the 24th suffering 17 hits with two men killed and three wounded. Richmond's Marine detachment were among the first troops to take possession of the Crescent City. Later, she aided in the capture of Confederate installations at Baton Rouge then proceeding up the Mississippi to just below Vicksburg on June 18, 1862. Ten days later Richmond ran the Confederate water batteries with Farragut successfully passing with the fleet at a cost of 2 men killed and heavy damage to the ship. On July 15, 1862, with guns blazing, CSS Arkansas steamed through the unsuspecting Union fleet with Richmond and others in pursuit, but reached the protection of Vicksburg's batteries unscathed. Farragut's squadron attempted to pass the fortifications at Port Hudson on March 14, 1863 in what became one of the fiercest exchanges of artillery on the Mississippi. Faced with withering fire only the flagship Hartford and the USS Albatross succeeded in passing the batteries. Richmond was lashed to USS Genesee and even with steam pressure dangerously high, neither ship could make headway against the strong current and unrelenting fire. Richmond's executive officer, Commander Andrew B. Cummings, was mortally wounded. The ship was "struck soon afterwards by a 42-pounder shell which ruptured her steam lines, filling the engine room and berth deck with live steam." The pair were forced to reverse course and endure heavy shell fire all over again. Richmond remained on scene near Port Hudson during the siege "occasionally providing guns and their crews for use ashore." After a much needed refit, Richmond rejoined Farragut's squadron at New Orleans in October 1863 providing muscle for the blockade off Mobile. Steaming in the wake of Hartford and Farragut's impulsive "Damn the torpedoes" directive, Richmond played an exemplary role in the chaotic battle of Mobile Bay. With the Admiral's battle line bent and coming under attack by the the lumbering CSS Tennessee and her aggressive consorts, Richmond's gunnery engaged all four of the enemy simultaneously, effectively disrupting the Southern onslaught. Hartford and Richmond pummeled the slow moving Tennessee for nearly an hour before Confederate Admiral Buchanan opted to surrender his derelict ironclad, now completely surrounded in the flotsam of the Bay.  The fleet, including Richmond, then turned their combined weight of shot on the defiant Fort Morgan which finally capitulated on August 23 to Union troops ashore.  In the last significant naval action of the war, the Confederate cottonclad CSS Webb steamed from her lair on the Red River in a nighttime attempt to reach the open sea with a gaggle of Mississippi gunboats in hot pursuit. She ran smack into the veteran Richmond blocking the estuary leading to the Gulf of Mexico. Rather than surrender, Webb's crew ran her aground and torched the ship. During the war, 33 sailors and Marines of Richmond's company won the Medal of Honor, the most of any Union warship. In service as an active Navy warship until 1890, Richmond survived into the next century as a receiving ship and was not struck from the Navy List until June 1919.

Benton CDV with sharp clarity, near EXC.  Print of Mississippi shows broken glass upper right in original negative with a scratch and several chips from same.  Clarity is good although albumen is somewhat light with rounded corners, overall G.  Richmond image taken at some distance shows average clarity, slightly soiled else near EXC.