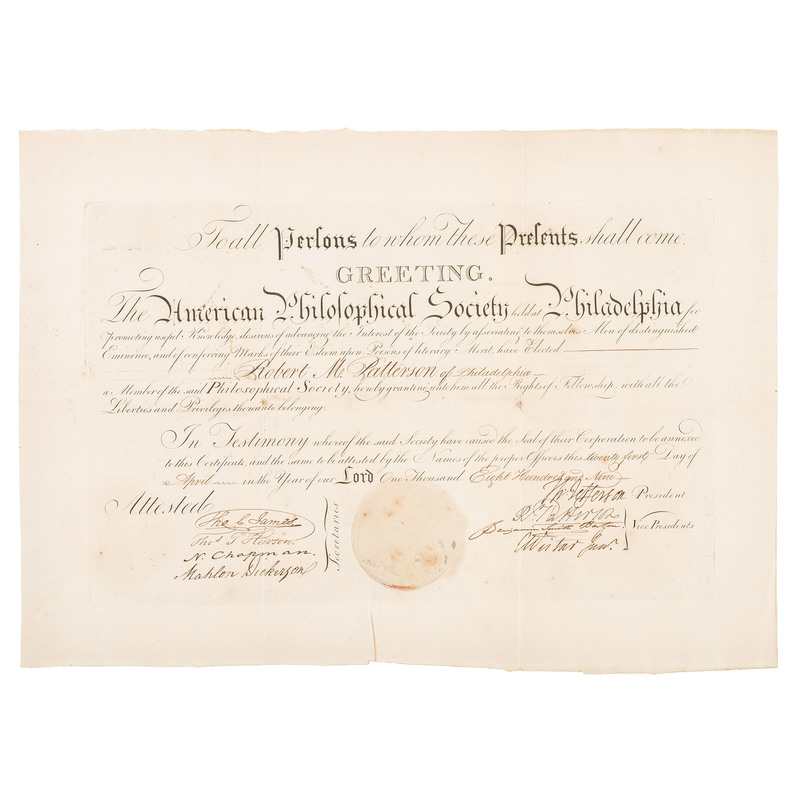 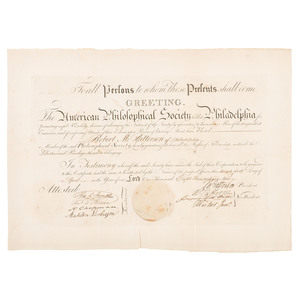 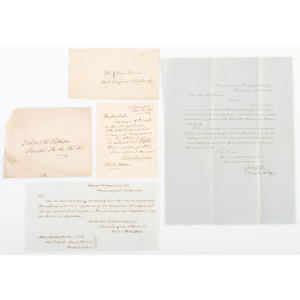 Robert Maskell Patterson was born in Philadelphia in 1787. He was a professor of mathematics, chemistry and natural philosophy at the University of Pennsylvania and professor of natural philosophy at the University of Virginia. He became the 6th Director of the US Mint (1835-1851). He was also a member of the American Philosophical Society, the youngest at the time of his election to membership, and later became president of the society. Patterson followed in the footsteps of his father, Robert Patterson (1743-1824) who was the fifth president of the APS and the fourth director of the US Mint. The younger Patterson was one of five APS members chosen by Thomas Jefferson to instruct Lewis and Clark before their expedition. Patterson became close friends with Jefferson, and the two men apparently wrote to each other in code. One letter written to Jefferson by Robert M. Patterson in 1801 was decoded in 2007, and was determined to be the Declaration of Independence. (Silverman, Rachel. Wall Street Journal, July 2, 2009)

Several letters relating to significant points of Patterson's life are also included. He was initially voted as president of the APS in 1845, however, he declined the position for unspecified reasons. A letter on black bordered paper from Patterson to the secretary of the society John Kintzing Kane (1795-1858) informs the society of his decision, Patterson's seal in black wax foretelling the unhappy news. Also included are period copies of additional letters to the members of the AHP regarding his decision to decline the presidency.

Patterson later accepted the presidency of the AHP in 1849 and served in the role until his death in 1854. A letter included, here however, suggests that he attempted to step down earlier in 1852, citing ill health. In a letter on pale blue paper dated November 19, 1852, secretary Robley Dunglison (1798-1869) writes "to express to you the sincere regret with which they have received the announcement of your intention to decline being again a candidate for the office of president of the Society..."

Lot also includes three newspaper clippings related to Patterson and a scarce booklet Address Delivered at the close of the Thirteenth Exhibition of American Manufactures Held By The Franklin Institute, of the State of Pennsylvania, for the Promotion of the Mechanic Arts, October, 1843, in original wrappers.

Creasing to certificate with two small tears at center of document, some brown spotting.

Letter to Kane has large chip to left edge and is partially cut around seal. Letter from Dunglison on blue paper has corresponding tears to upper and lower edges. Some minor toning to all letters.

Two newspaper clippings are pasted to cardstock with apparent adhesive. Third is clipped and unaffixed. All show toning.

Address cover toned with small hole in front wrapper and some brown spots, a water stain to lower right edge affects all pages and wrappers.