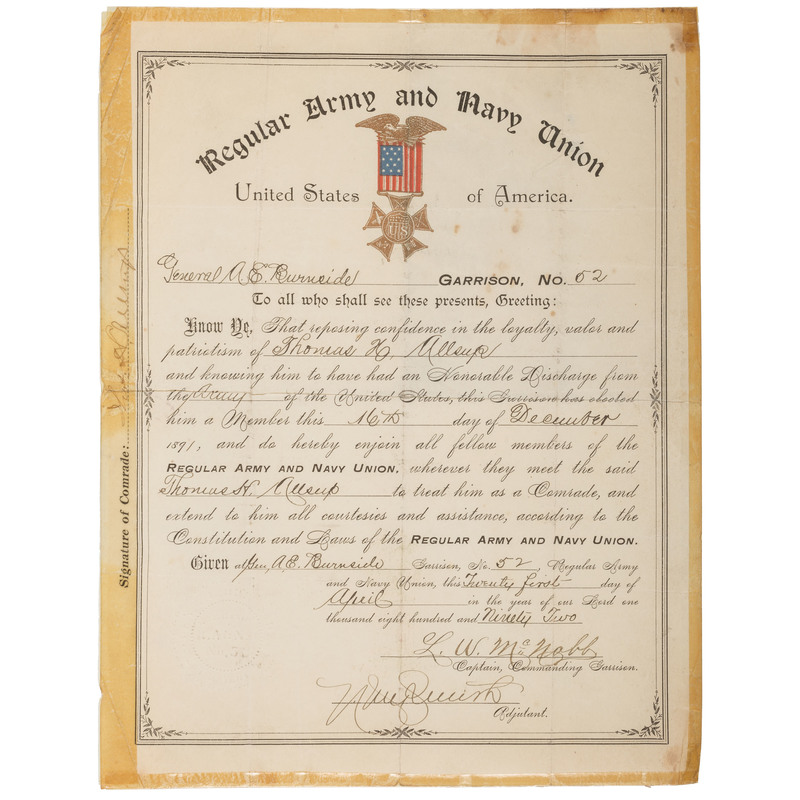 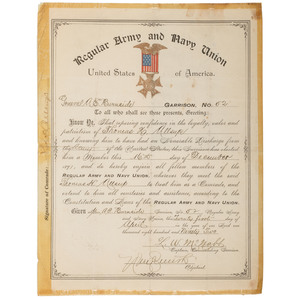 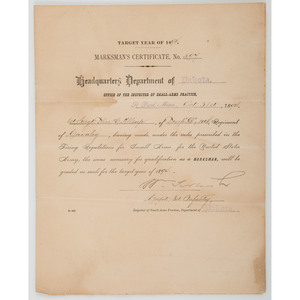 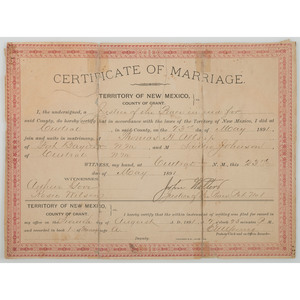 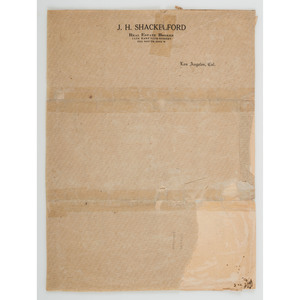 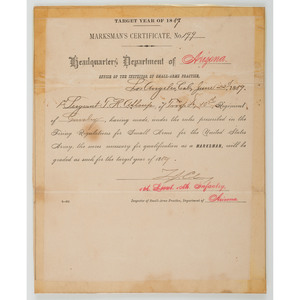 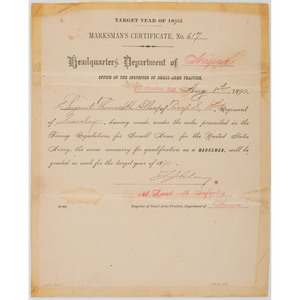 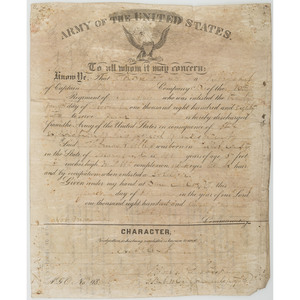 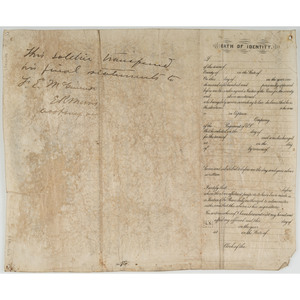 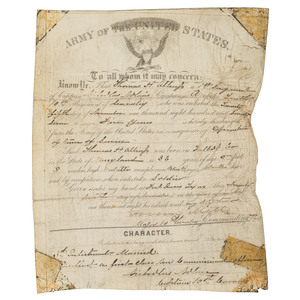 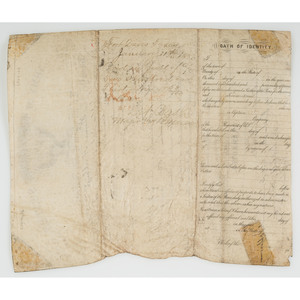 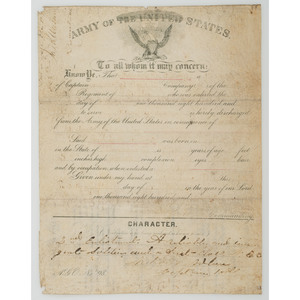 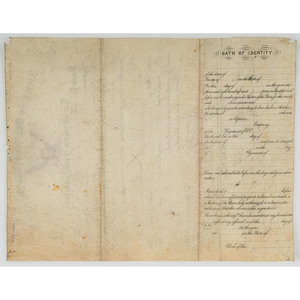 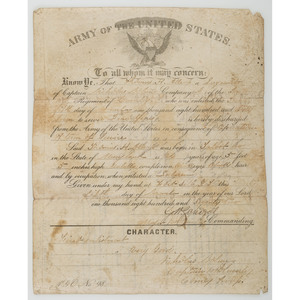 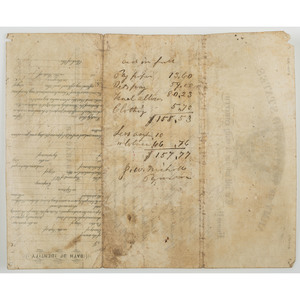 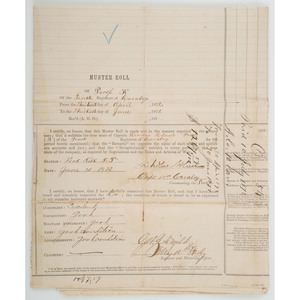 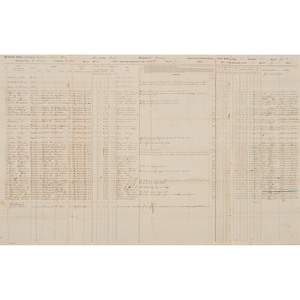 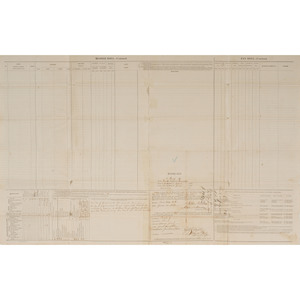 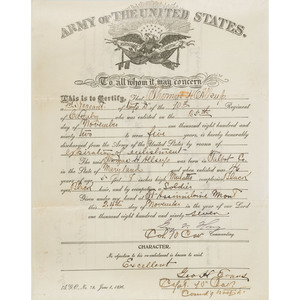 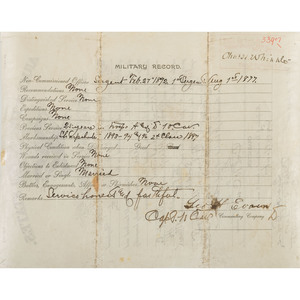 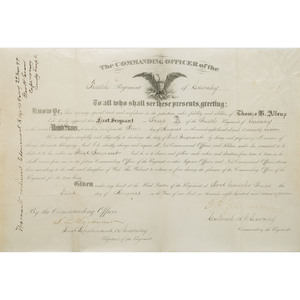 The exceptional archive of Buffalo Soldier Thomas Henry Allsup I (1847-1920) documenting his military service with the 10th Cavalry during the entirety of the Late Indian Wars. Born in Talbot County, Maryland in 1847, it is a distinct possibility that Allsup was born into slavery. In the 1910 census, both his parent’s birthplaces were listed as “Africa,” suggesting their likely enslavement in antebellum Maryland. Regardless of his status before and during the Civil War, Allsup must have wanted to forge a new path and joined the nascent 10th Cavalry, enlisting on November 25, 1867 in Baltimore, Maryland. He would serve in excellent standing for thirty years, presumed to have retired in 1897. The documents in the archive chart his pioneering path across the American West.

Included in the archive is an 1872 Muster Roll of Troop A of the 10th Cavalry for April to June 1872 at Fort Sill, Indian Territory (now Oklahoma) paid and signed on July 10, 1872. It notes that the “Troop performed the usual garrison duty and furnished mounted details for detached service and also fatigue parties for the Post, during the time for which musters,” that their discipline is “excellent” and their instruction and military appearance are “good.” Allsup is listed as Corporal, one of four, among the 33 men in the troop. In the earliest of his five discharge papers, issued at the expiration of his five-year terms of service, on November 25, 1872, his character is listed as “very good.” On August 1, 1877, Allsup was promoted to First Sergeant, a rank he would hold for the remainder of his career.

In 1877, he was stationed at Fort Concho, Texas with the second of his Discharge papers issued there, noting his character as “excellent” and that he was “a reliable and intelligent soldier.” It was in this same year that he played a significant role in the Buffalo Soldier Tragedy of 1877 (also known as the Staked Plains Horror), an ill-fated sortie of 10th Cavalry troops led by Nicholas Merrit Nolan in July 1877 in an attempt to catch Comanche warriors on behalf of a group of buffalo hunters who had been raided. The expedition occurred during a severe drought and the group may have been deliberately misled resulting in the “Thirsting Time” with most of the men going five days without water, resorting to drinking the blood of their dying horses. Four soldiers and one civilian died during the ordeal. During the calamity, Nolan demoted an officer, First Sergeant William Umbles who would then separate from the main group. Umbles would claim later during his trial that he was searching for water as ordered, while Nolan believed that he had deserted. During all of this, Allsup was in charge of the Bull Creek supply camp and was on duty when Umbles arrived and claimed that Nolan and the other men were dead. Allsup was skeptical and instead headed to Doubles Lake with a wagon of water and other supplies, reuniting with Nolan and the main group of men. There is no doubt that Allsup brought much-needed relief for his fatigued and dehydrated comrades and helped to prevent further deaths. Allsup would go on to testify in the October trial of Umbles.

Allsup continued to serve the 10th Cavalry with distinction with his further discharge papers reporting his character as “excellent.” He is known to have served at Fort Davis, Texas; San Carlos, Arizona territory; Fort Bayard, New Mexico territory; and his final post at Fort Assinniboine, Dakota Territory in what is now north-central Montana. In an August 1, 1988 LA Times article “The Proud Legacy of a Buffalo Soldier,” his grandson Thomas H. Allsup III recalls that “Black Jack Pershing was his commanding officer for his last two years. My grandfather had 17 children. He talked to Geronimo.” While it cannot be confirmed that Allsup conversed with Geronimo, it is not without possibility. And it is certainly true that John J. "Black Jack" Pershing commanded the 10th Cavalry at Fort Assinniboine in 1896 when Allsup was stationed there in his last years of service.

Other documents in the archive provide further testament to his excellence as a soldier including two marksman’s certificates - one issued in 1889 in Arizona and the second in 1894 in the Department of Dakota. He was also admitted into the noted veterans’ organization the Regular Army and Navy Union, with his 1892 certificate included here.

A lovely personal document included in the archive is the marriage certificate for Allsup and his wife Saddie (Sadie) Johnson. The document acknowledges their marriage on May 23, 1891. It is likely, however, that the two were common-law married prior to this as his 1882 discharge papers note, “3rd Enlistment. Married. Excellent, a first-class commissioned officer” and census records indicate that at least two of their many children were born prior to 1891. Thomas and Sadie would retire in Havre, Montana, the small town near Fort Assinniboine where they would live in a house they owned until at least 1920. Allsup would pass away in San Bernardino, California on March 16, 1922, possibly relocating to be near his children, at least three of whom relocated to Southern California.

Muster roll shows some splitting at creases, some ink has faded, some documents with tape residue, marriage certificate with splits to creases, some toning.