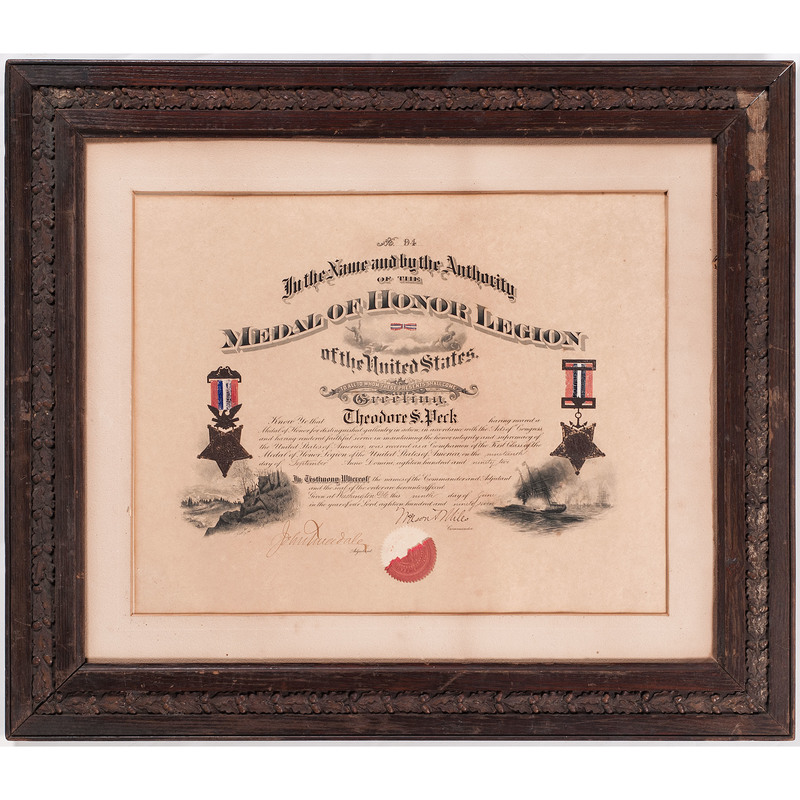 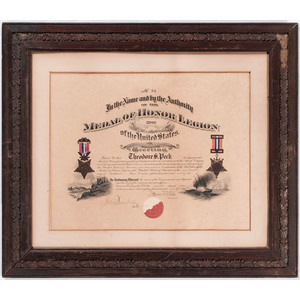 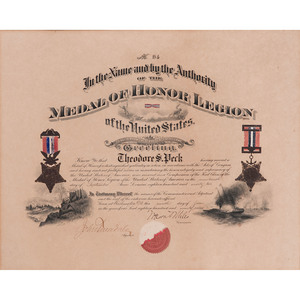 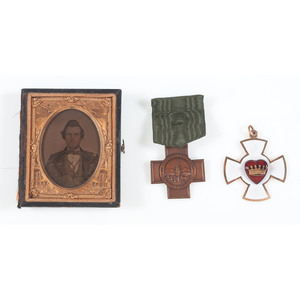 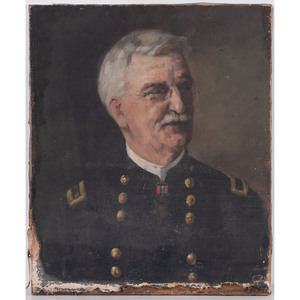 Theodore Safford Peck (1843-1918) was born in Burlington, Vermont. After multiple attempts at enlistment which were declined on account of his young age, Peck successfully enlisted on 10/01/1861 as a Private. On 11/19/1861 he mustered into Co. K, Vermont 1st Cavalry. Peck was discharged for promotion on 6/27/1862, and on 7/9/1862 he mustered into Field and Staff Vermont 9th Infantry. Throughout the war Peck would continue to rise through the ranks serving in various roles including as an Assistant Adjutant General, Assistant Quartermaster, and an aide-de-camp. He was mustered out on 6/23/1865.

Peck was wounded 9/29/1864 at Chaffin's Farm, VA, however, his most significant accomplishment during the war no doubt came on 2/2/1864 during the Battle at Newport Barracks, NC. On that day approximately 750 Union troops faced an overwhelming Confederate force of 5,000 and superior artillery. The Vermont 9th, led on the right flank by then 1st Lt. Theodore Peck, was forced to make a heroic stand as it protected two bridges over the Newport River and the retreating Union troops who utilized the bridges for escape. Facing a constant barrage of fire and repelling multiple advances, the rear guard of the 9th successfully defended the bridges then destroyed them thereby preventing the enemy from crossing. For his actions on that day, Peck was awarded the Medal of Honor. His citation reads: "By long and persistent resistance and burning the bridges, kept a superior force of the enemy at bay and covered the retreat of the garrison."

Following the war, Peck remained active in military via the Vermont National Guard. He started a successful insurance business and was a member in a multitude of civic and fraternal organizations. He died in Burlington in 1918.

Included in this lot are a MOH certificate (not military) presented to Peck by the Medal of Honor Legion of the United States, measuring 23.5 x 19.75 in. (sight), framed to 29.25 x 26 in., signed by Gen. Nelson A. Miles; a post-war Vermont National Guard medal, green ribbon with metal cross; a "gold" society medal featuring a white cross, red heart, crown, and engraved on verso "Be Just Merciful Honorable and Brave"; and an undated, unidentified ninth plate ambrotype of an elegantly dressed man, housed in a pressed paper case fully separated at spine.

AUCTIONEER'S NOTE: The painting offered with the lot, an oil on canvas portrait measuring 19.5 x 23.5 in., depicts Theodore Safford Ward (1843-1918) as major general in the Vermont National Guard, much later, ca 1890s.

Part of seal on MOH certificate is no longer affixed, but has been preserved and accompanies the certificate. Painting with extensive damage to bottom and lower left, including missing canvas and paint removal. See photographs for details.