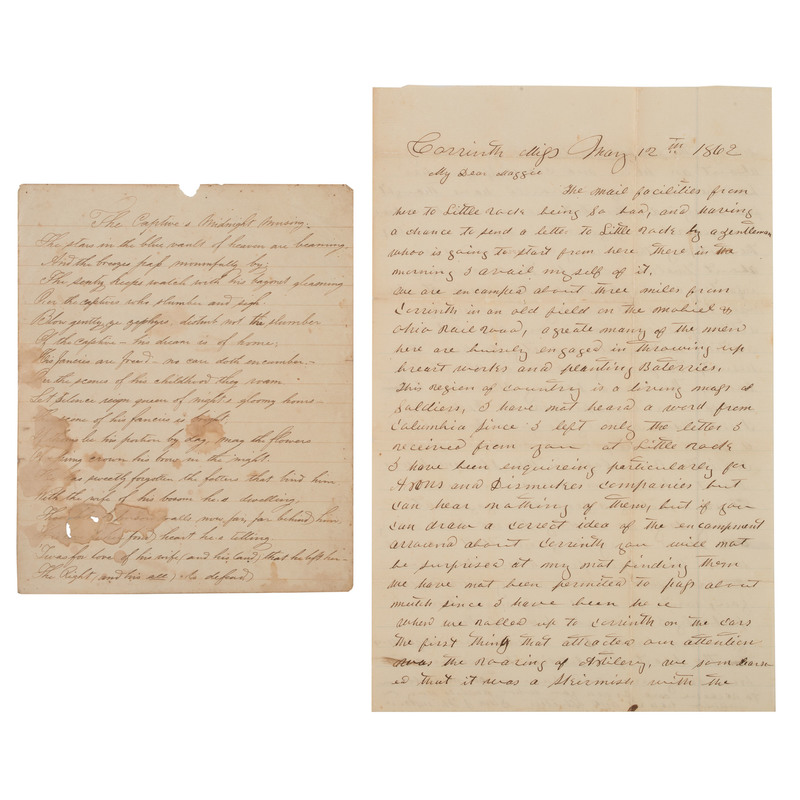 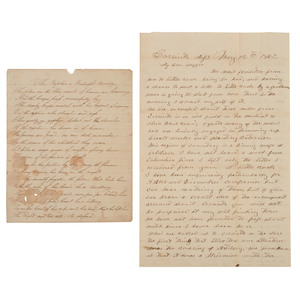 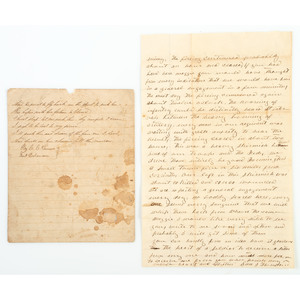 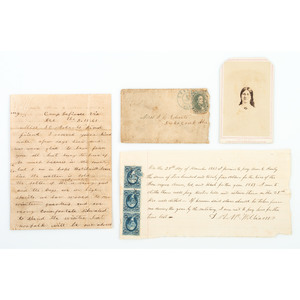 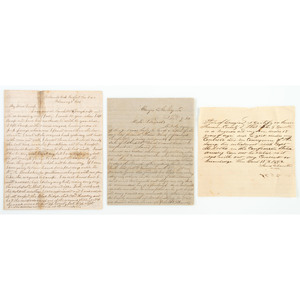 The Plantation South and Confederacy, Documents 1860-1865

A diverse group of 17+ Confederate letters, along with a CDV, including:

McCabe, Abner. 18th Regt., Va. Infy. Holcombs Rock, Bedford Co., Va., February 3, 1865. 4pp. McCabe enlisted April 23, 1861 and was hospitalized in August with an inguinal hernia. He was finally discharged in January 1862. However, he seems to be attached to the 18th still as a wagon master. He writes to his wife giving a graphic description of his life in winter. As he was writing, it had been snowing for days. He had been sent out to "press forage" when folks had more than the law allowed. He includes a description of trying to get mules and wagons over icy stretches on mountain roads while crossing the Blue Ridge. One wagon got stuck, and they barely had time to cut the mules away before the wagon went over a 20 foot cliff. It fortunately landed upside down on the load of hay. The men climbed down, brought up the pieces of the wagon, repaired it and were on their way in two hours.

Garrette, James. Fannin County, Georgia. March 11, 1862. Note certifying that his son, John, is a minor and tried to enlist with Capt. S.C. Dobbs without his father's knowledge or consent.

Unknown soldier, Orange C.H., VA. Jan. 9, 1864. To friend, McElroy, Samuel J. (Sgt.). Trying to get his friend to find a recruit, since any soldier getting someone to enlist was promised a furlough.

Agreement of D.A. McWilliams to hire three slaves, Amos, Ed and Dick, from Ann E. Bailey/Baily for the year 1863. Includes CDV of Ann Bailey. He also agrees to clothe them well and pay any medical expenses they may accrue. However, if any of the men are taken from him (such as by the Confederate Army), he is not obligated to pay their hire for the time lost. Bailey was the widow of Hartwell Bailey, former sheriff of Shelby Co., KY and the daughter of Nudigate Owsley, whose brother, William, was the 16th governor of Kentucky (1844-1848). She inherited the farm and its slaves.

Roberts, T.J. Camp Defiance, Va., Dec. 5, 1861. 4pp. To Miss S.C. Roberts. He is in winter quarters about 6 miles from Norfolk and 8 miles from Fortress Monroe. Went within 2 miles of the fort on Sunday and could see Yankee sentinels with his spyglass. Was in a small artillery battle a few days ago, no damage done to their parts. "The nearest ball fell in 15 feet of us which we saved and brought to the camp with us to play with....It would have amused anybody to see the boys running and dodging from the balls and falling in the sand when they would hear the ball coming. It reminded me of when I used to play Townball." (Townball was one of many local versions of a ball and stick game that eventually was standardized to baseball - but many local versions are still played today.)  T. John/John T. Roberts enlisted in January 1862 in the Alabama Light Artillery, Lee's Battery.

Thompson, Sam J. Corinth, Miss. May 12th, 1862. To Maggie (poss. wife). "We are encamped about three miles from Corinth in an old field on the Mobile & Ohio Railroad....This region of the country is a living mass of soldiers....When we rolled up on Corinth on the cars the first thing that attracted our attention was the roaring of artillery...The firing continued about an hour and ceased....The next day the firing commenced again about twelve o'clock. The roaring of infantry could be distinctly heard at intervals between the heavy booming of artillery....the firing ceased in about two hours....We are expecting a general engagement every day." The Siege of Corinth was between April 29 and May 30, 1862. The Federal forces finally drove the Confederates out of the town. Thompson enlisted as a Sergeant in Co. H, 23rd Arkansas Infantry, but not much is known about his dates of service.

2nd letter from Samuel J. Thompson dated June 18, 1862 (first letter described in current online listing), who fought with the 23rd Arkansas Infantry. In this letter, he describes his unit's retreat from Corinth including subsequent skirmishing and the retaking of about 2000 sick that had been captured by the Federals.

Turner, CC. Poem by a Confederate soldier while a POW at Fort Delaware. Actually a very touching poem, "The Captive's Midnight Musing," contrasting on the role of sleep/dreams in escaping the horrors of prison. 24 lines. "He has sweetly forgotten the fetters that bind him / with the wife of his bosom he's dwelling. / Those bleak prison walls now far, far behind him, / His love to her fond heart he's telling."

Roberts, H.A.G. Missi. City, April 10th, 1863. To William "Ferd" Price, a nearby landowner. "If any of my fugitives or those of any other Confederate planter are recovered I fear it will be at the end of the war first, but not even then, unless our Government takes a firm position in demanding a return of every negro the Yankees have stolen or induced to join them during this war....Even then the negroes would be so much demoralised by Yankee association that they would be almost worthless." He goes on to list other items stolen by the Federal forces and says the Confederate government should demand full remuneration. "If it fails to do so, I fear we have a most imbecile excuse for a Government...."

Manuscript copy of a poem composed by a POW at Camp Chase, Ohio. Another prisoner, ill in the camp hospital, confided to friend and fellow captive, Col. W.S. Hawkins, 11th TN Cav., that he was aggrieved because his fiancee had not written to him. A letter finally arrived the day after he died, curtly ending the engagement. The poem was composed by Col. Hawkins to the lady in response to her letter. It begins: "Your letter, lady came too late, / For heaven had claimed it's own / Ah, sudden change from prison bar / Unto the great white throne; / And yet I think he would have stayed, / To live for his disdain, / Could he have read the careless words / Which you have sent in vain."

Three notes from antebellum (1860) Virginia and Tennessee demonstrating the status of African Americans at that time. The notes concern the disposition of a slave named "Sol" and were written from Tennessee by the children of a Virginia widow to their uncle, a Virginia lawyer.

Letter possibly written by James A. Clinedinst, Co F, 10th Virginia Infantry, although this cannot be confirmed with all certainty. The homesick soldier writes a love letter to a young woman.

Unknown Confederate soldier's letter to Maggie McElroy of Hopewell, NC, dated May 14, 1864, and sent from Conford, NC. A letter from a heartbroken soldier.

CSA soldier Will Cox, letter written just after he left the service, dated March 20, 1863, from a town in the area of Vicksburg, Mississippi. 4pp. He mentions meeting Jefferson Davis, who must have known his family, the siege of Vicksburg, his farm being ransacked by Union soldiers and later confiscated for use as a Confederate army post and hospital.

Variable, but many of these are faded and water stains are common. All have been transcribed.