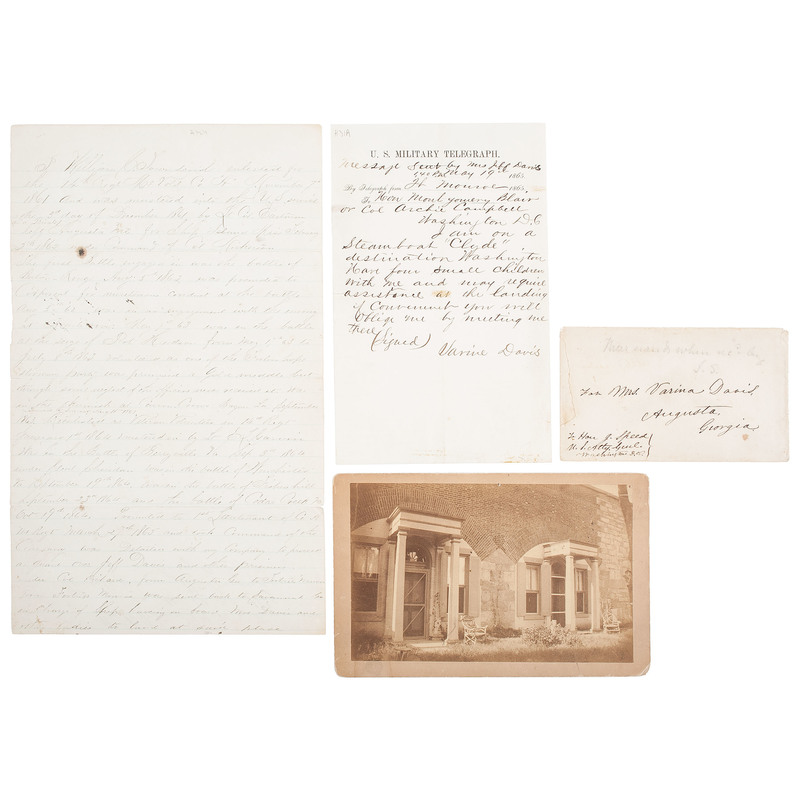 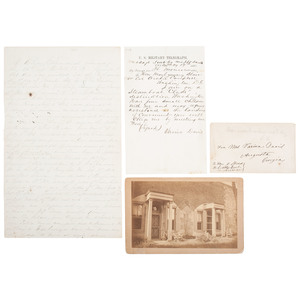 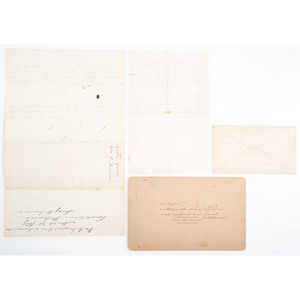 The Imprisonment of Jefferson Davis in Fortress Monroe

Lot of 4: AMS, Townsend, William C., 2pp, 8 x 12.5 in. Townsend writes out his military history from enlistment on November 7, 1861 in the 14th Maine Volunteer Infantry to his mustering out on August 28, 1865. He fought at Baton Rouge, August 5, 1862 and was "promoted to corporal for meritorious conduct at the battle...at the siege of Port Hudson from May 17, 63 to July 8th 1863 volunteered as one of the Forlorn Hope storming party was promised a gold meddle [sic] but through some neglect of the officers never received it...promoted to 1st Lieutenant of Co. A 14th Regt. March 27th 1865 and took command of the Company was detailed with my company to proceed as guard over Jeff Davis and other prisoners under Col. Pichard [sic] from Augusta, Ga. to Fortress Monroe [then] from Fortress Monroe was sent back to Savannah, Ga. in charge of Ship having on board Mrs. Davis and other Ladies to land at said place..." When the steamship Clyde docked at Hampton Roads, Jefferson Davis was taken to Fortress Monroe but his wife, children and the other women in their party were kept on board. They were then sent back to Savannah where Varina Davis was placed under house arrest until the end of the summer.

The second item is the text of a US Military Telegraph, sent for Varina Davis. In the hand of a telegraph clerk. Sent 1:40 pm May 19, 1865. From Ft. Monroe, "to Hon. Montgomery Blair or Col. Archie Campbell, Washington, DC. I am on a Steamboat 'Clyde' destination Washington. Have four small children with me and may require assistance at the landing if convenient you will oblige me by meeting me there. (Signed) Varine [sic] Davis." Although the Davises and several other families were on board the Clyde, and given nice accommodations and food, when the ship arrived, everyone was kept on board. Finally on May 22, Davis and others were taken from the ship and imprisoned at Fortress Monroe, the women were returned to Savannah, GA and not permitted to leave the state for two years. Varina feared for her children and sent them to Canada to live with relatives. In the meantime she worked tirelessly to get her husband released and to raise sympathy for his situation. Initially prevented from communicating with her husband, eventually she was allowed to correspond with him.

The third article is an envelope, (3 x 5.75 in.) addressed in Jefferson Davis' hand: "For Mrs. Varina Davis, Augusta, Georgia." lower left corner with additional note by Davis: "To Hon. J. Speed / US Atty. Genl / Washington DC." In pencil at top: "Was erased when recd. by J.S."

What Davis was allowed to send while incarcerated at Fortress Monroe was examined by Attorney General James Speed. In a note sent to General Nelson Miles, then commander at Fortress Monroe, E.D. Townsend, AAG, wrote: "Any letters which Mr. Davis desires to send his wife must relate only family matters and be first submitted to the Attorney General's inspection...." (Aug. 18, 1865, ORs Vol. 8, Series 3) While no postmark is on this cover, it is opened along the left end. Although Davis complained bitterly about this indignity, by the end of 1866 Varina and Winnie had moved into the fort with him and writing would not have been very common. It must have been written after August 18, 1865 or in the early months of 1866 once the couple was permitted to communicate and before Varina and Winnie moved into Fortress Monroe.

The last item is a cabinet card, with backmark of William Baulch, Fortress Monroe, Virginia. It has a pre-printed Line with "Scene____" which has the manuscript note: "Casemate where Jeff Davis was confined and ironed, Fort Monroe, Va."

First has a few spots. Ink a bit light. Second is excellent. Third with notes, minor foxing. Cab cd. is a bit toned, but very good.