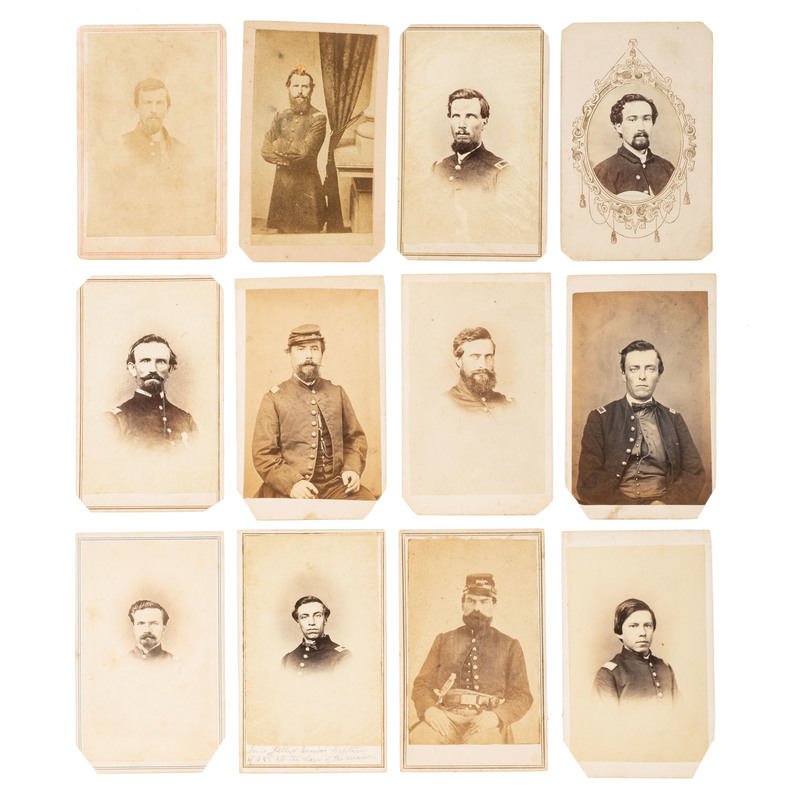 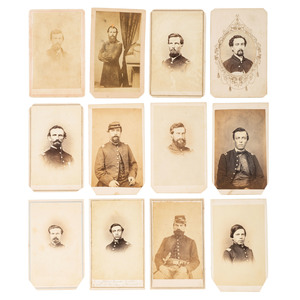 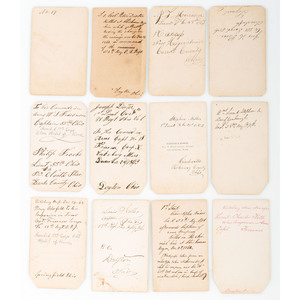 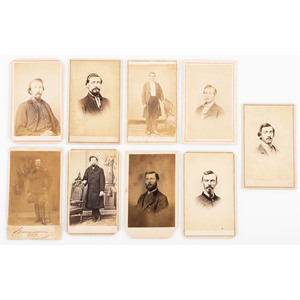 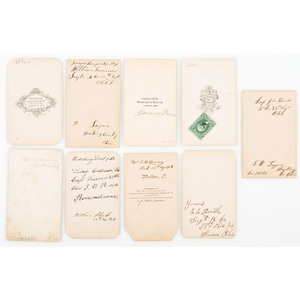 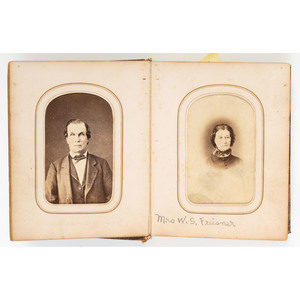 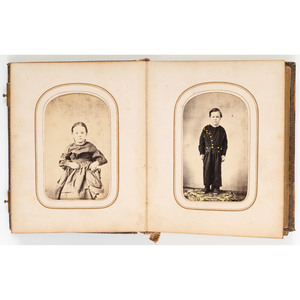 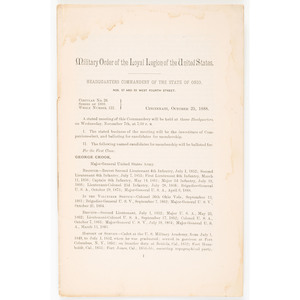 Lot of 2 CDV albums previously owned by Ohio native and 58th Ohio Infantry Colonel William S. Friesner (1838-1918), featuring 3.5 x 5 in. pocket-sized leather album with penciled identification on inside cover, "Col. Wm. S. Friesner / Civil War Comrades," containing 20 CDVs of soldiers from the 58th OH Infantry, almost all signed and inscribed on verso to Friesner. Accompanied by 4.5 x 5.5 in. leather album containing 43 CDVs of Friesner family members and friends, some identified in pencil on album page. Most are credited to Lancaster and Logan, OH photographers. A vignetted carte de visite of Friesner in uniform and an October 25, 1888 pamphlet in which Friesner is nominated to join the Military Order of the Loyal Legion of the United States is also included.

William S. Friesner enlisted as a captain on October 9, 1861 and was commissioned the same day into Company K of the 58th Ohio Infantry. Notably, he was serving as a guard of prisoners of war aboard the Sultana on April 27, 1865 when three of her four boilers exploded and she sank near Memphis. He survived the disaster and went on to testify in the trial of Captain Frederic Speed.

The Sultana was a side-wheel steamboat built in Cincinnati in 1863, intended for cotton trade and built with a capacity of 376 passengers. On the fateful day of her sinking, the Sultana was carrying 2,137. Though her sinking is considered one of the worst naval disasters in US history, the news was overshadowed by the end of the Civil War and the very recent assassination of President Lincoln.

On April 21, 1865, Sultana left Vicksburg and traveled to New Orleans to pick up paroled prisoners of war. During the journey, one of the boilers sprang a leak. While in New Orleans, Captain James Cass Mason decided against a proper repair of the boiler as he feared the prisoners would be picked up by other boats. Receiving only temporary repairs, the boat then took on an enormous amount of paroled prisoners, a total of 1,960 along with 22 guards from the 58th Ohio Volunteer Infantry including Friesner and James Hines (CDV portrait included in album). Sultana traveled north for two days, fighting against heavy flood waters, and around 2 am on April 27, near Memphis, one boiler exploded causing two more to follow. There are several contradictory reports as to how many actually died, however, well over 1000 lost their lives.

The causes of the disaster are attributed to flaws in the design and operation of the boilers coupled with the gross overcrowding of the ship. Despite the human error, no one was ever held accountable for the tragedy. Captain Frederic Speed was convicted for overcrowding the ship, a trial in which Friesner testified. His verdict, however, was overturned on the grounds that Speed had not been on the camp and didn’t place the soldiers on board himself.

During the war, the 58th Ohio Infantry was organized at Camp Chase starting on October 1, 1861 remaining there until February 1862.  Under Colonel Valentine Bausenwein (CDV portrait included in album), they traveled to Fort Donelson, arriving on February 13 and joining the battle. They would then engage the enemy at Shiloh and Corinth before marching to Memphis after the evacuation. In December 1862 they would join Sherman’s first assault on Vicksburg. It was in the opening engagement at the Battle of Chickasaw Bayou (Battle of Walnut Hills) where two of Friesner’s companions included in his CDV album were killed in action and four were wounded in action. Notably, Lt. Colonel Peter Dister led the charge upon the parapets.

The 58th would go on help capture the Arkansas Post and in April 1863 joined Grant's Vicksburg campaign. In September they returned to Vickburg and would remain there on guard duty until they were mustered out.

The following soldiers from the 58th OH are included (views autographed unless otherwise noted):

Some CDVs have clipped corners in order to fit in the album. Wear to pocket album leather with scuffing, edgewear, especially on creases and some peeling to lower spine cap. Larger family album lacking rear hinge, second rear hinge partially detached, clasps lacking, some edgewear with cracked spine and scuffs to leather spine. One page has been partially torn in an attempt to remove an image. CDV of Friesner faded and toned. Pamphlet with dampstain to top edge.