2004, Spring Americana and Decorative Arts, May 22 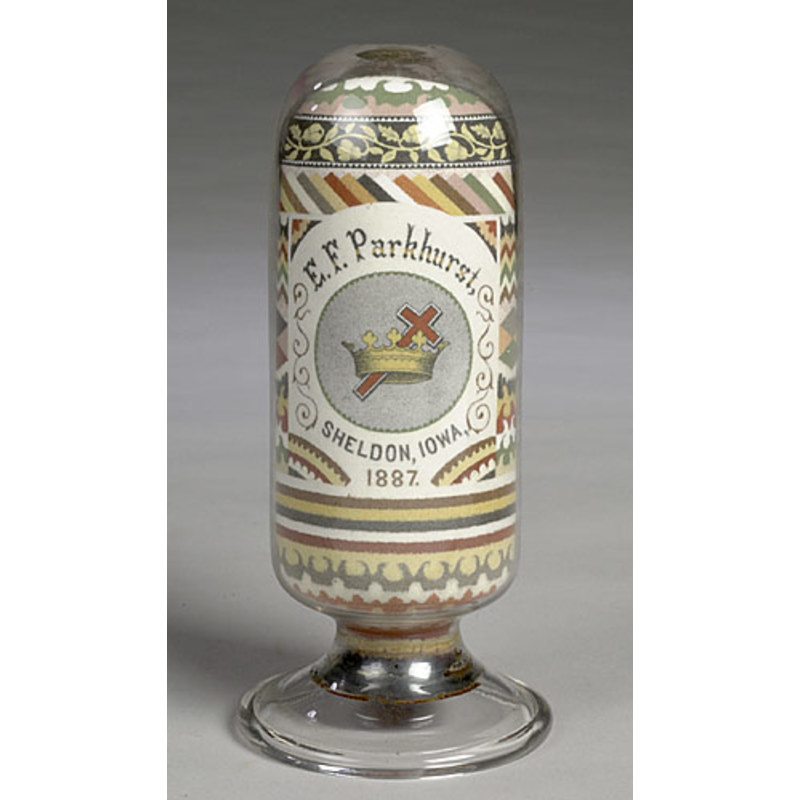 blown, oblong, footed bottle with ground pontil, filled with at approximately 1 dozen colors of sand arranged in an array geometric, scrollwork, and foliate decoration, and central designs on two sides. One scene depicts a three-masted ship in choppy seas flying the American flag; opposite this is a vignette comprised of a cross and crown, surrounded by the name E.F. Parkhurst and SHELDON, IOWA, 1887. The underside retains the original printed paper label: PICTURED ROCK SAND. PUT UP BY A. CLEMENS. DEAF MUTE McGREGOR, IOWA. A magnificent piece of folk art; 7.75" high x 3.5" diamter (at base).

Andrew Clemens (1857-1894), born in Dubuque, Iowa, spent most of his life in nearby McGregor. He lost his hearing and voice to encephalitis at the age of five. At thirteen, his parents sent him to the Iowa Institute for the Education of the Deaf and Dumb in Council Bluffs. After leaving the Institute, Clemens began experimenting with sand art, collecting the naturally occurring, multicolored sands from the Pictured Rocks region of Iowa. He fashioned special tools that he used to arrange the sand in intricate designs and then pack it tightly (he used no glue of any kind). Sizes and designs varied, and orders came to Clemens from around the world, each customer paying about five to seven dollars. His early work was generally geometric in nature, but as his skill and creativity developed, his subjects ranged from boats and ships, flowers, flags, and eagles. He frequently portrayed local subjects, and often created custom sandbottles depicting a scene of his customer's choosing and including their name using a fancy font in multiple colors. Perhaps his best work is a twelve-inch bottle that includes a portrait of George Washington on horseback, now in the collection of the Iowa State Historical Museum. Larger, more complex bottles took as much as year to complete. Clemens received moderate recognition for his work during his lifetime, exhibiting at the South Side Museum in Chicago. He received an invitation to show his art at the 1893 Columbian Exposition, but Clemens refused thinking that he was not good enough for such a venue. Throughout his career, the window in front of his work table was a popular place for McGregor residents to pass the time, watching the meticulous artist create his sandbottles. In his later years, he became so absorbed in his work, he lost interest in nearly everthing else, and the long hours hunched over his table began to take their toll. Clemens, dubbed "the portrait painter without a brush or even paint," died in 1894. He is thought to have produced hundreds of bottles during his lifetime, but relatively few survive today. See the May 1945 issue of The Palimpsest, the journal of the State Historical Society of Iowa.

Condition:Small flake on top, minor wear to label; else VG+.