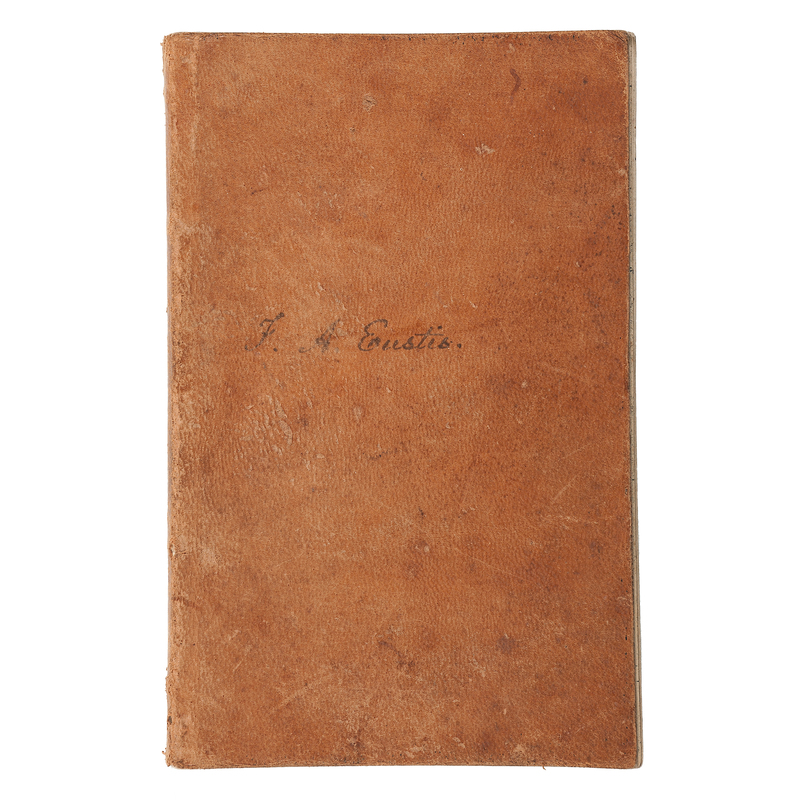 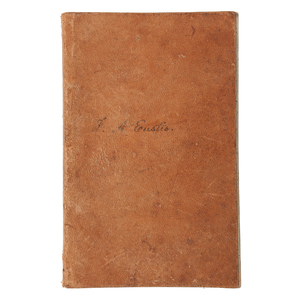 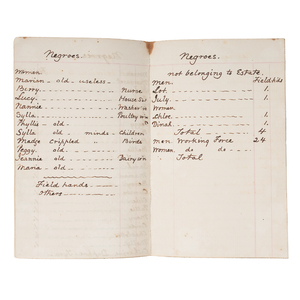 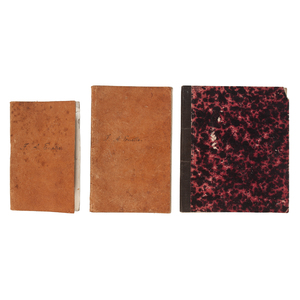 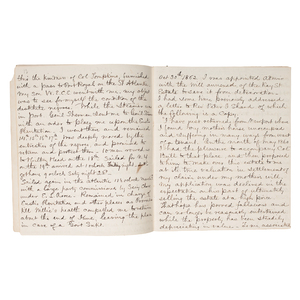 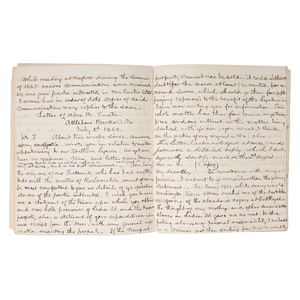 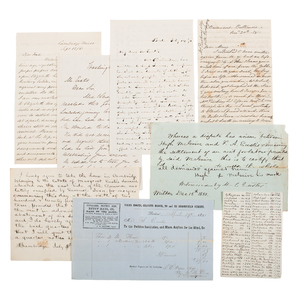 A leather-bound slave log recording the status of each slave and the expenses associated with their care for the Eustis Plantation and Gibbs Plantation in Lady Island, SC, as well as the Fuller Plantation on Wassa Island, SC; a time book recording the hours worked by Eustis Plantation slaves/employees from the end of April through the month of May 1862; a paper-bound notebook of copies of important letters and legal documents associated with the Eustis Plantation from 1861-1865, presumably written in Frederic Augustus Eustis’ hand; and 140 miscellaneous papers from Eustis and his family, mostly receipts and doctors’ bills spanning from 1838 to 1918 (mostly from the 1830s and 1840s). All items are accompanied by modern copies of research and articles related to the plantation.

A brilliant mind with degrees from both Harvard College and Harvard Divinity School, Fredric Augustus Eustis visited his recently deceased step-mother, Patience Izard’s sizable plantation in South Carolina with over 600 acres and 138 slaves. Tragic stories reached me of the destitution and suffering of abandoned negroes at Port Royal, wrote Eustis to his relative, the thought of my mother and the emancipated slaves on Ladies I’d gave me not rest...With a feeling of almost personal responsibility, I embarked on a steamer just then sailing from NY and went to Port Royal to see for myself—I went without preparation and no thought of remaining (July 6, 1865). The Yankee heir arrived in the spring of 1861 on board a steamer filled with missionaries with a similar purpose--to work abandoned plantations and care for neglected slaves. Even though he initially planned to stay for a short time, the importunities of the defenseless negroes prevailed against [his] discretion, and, after solemn deliberation, [he] consented to remain and protect them (July 6, 1865).

General Sherman granted Frederic A. Eustis written power to hold and protect his step-mother's land. In addition to her plantation, Sherman gave Eustis control of two others: the Gibbs Plantation on Lady Island and Fuller Plantation on Wassa Island. Sherman gave Eustis the properties to keep the land out of rebel hands and because of Eustis' high-ranking military family. His father, Abraham Eustis, was a brevet brigadier general in the army. His younger brother, Henry Lawrence Eustis, was a West Point graduate who was commissioned as a colonel in the 10th Regiment Massachusetts Volunteer Infantry in 1862, but reached the rank of brigadier general within two years. He fought at Chancellorsville, Gettysburg, Battle of the Wilderness, Spotsylvania, and Cold Harbor. Despite his success, he resigned from his position for “health reasons” possibly related to an opium addiction. After receiving the plantations, Eustis wrote, Like Saul, the son of Kish, who went to seek his father’s ashes(?) and found a kingdom, I went to save the negro and unexpectedly to myself find a plantation (July 6, 1865).

It was a monumental task to oversee all the crops, animals, people, and 26,000 pounds of cotton from the three estates. But, with industrial precision and good business sense, Eustis formulated conspicuous notes on his charges in three separate notebooks offered in the lot, and operated at a profit. In the first notebook, he recorded the names, ages, health, as well as clothing and expenses for all his slaves. In the second, he logged the number of hours they worked from the end of April through the end of May 1862. In the third, he kept a hand-written copy of all important legal documents and letters associated with the land. He experimented with the plantation system and transitioned from free-labor to wage-labor. At the Freedman’s Inquiry Commission in 1868, he testified that, “during forty years of plantation life [he never knew] so little sickness. Formerly every man had a fever of some kind, and now the veriest old cripple, who did nothing under secesh rule,  row[ed] a boat three nights in sucession to Eidsto, or [would] pick up the corn about the corn house” (Preliminary Report of the American Freedmen’s Inquiry Commission, New York, June 30, 1863, p. 7).

Eustis thoroughly enjoyed his work on the land, but former executors questioned his claim after the war and argued that they should re-assume the land. To settle the dispute, the local Union general ordered the land be auctioned and sold to the highest bidder. Eustis won, and resumed his work on the plantation until his death in 1871.

All items are in good condition and clearly legible. There is some toning of the paper and separation of the paper-bound journal.