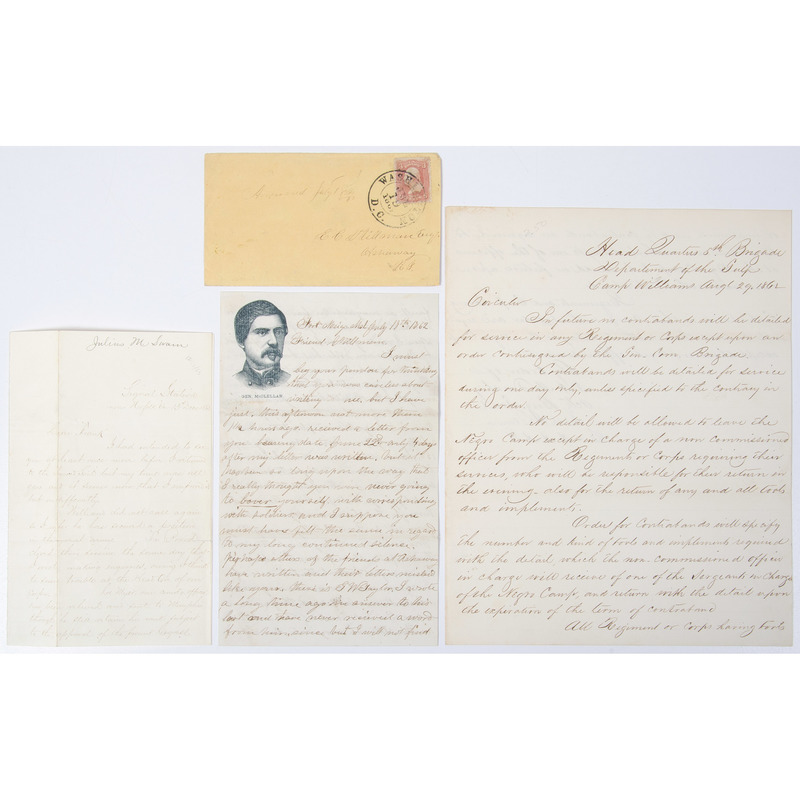 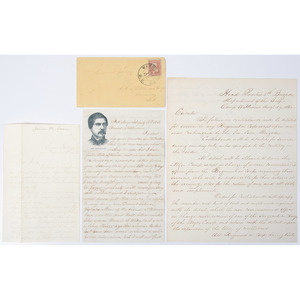 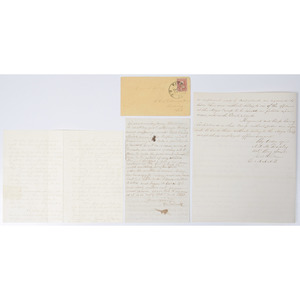 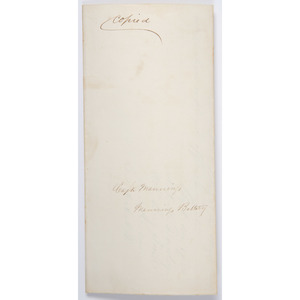 ALS, 2pp, 5 x 8 in., Fort Meigs, Maryland. July 18, 1862. Addressed to E.C. Stillman of Ashaway, Rhode Island, written by "Crandall" on General McClellan stationery. Crandall writes that his "now at Fort Meigs, Maryland, just outside the District and in sight of the Capitol Buildings, right in the midst of a slave holding population. There is a large tobacco plantation but a little way from here, where they employ 150 hands, men, women, and children. It is no uncommon sight to see men and women in the fields to work hoeing and digging." He and Stillman have presumably spoken or corresponded previously on this subject of slavery, and Crandall now assets that the "overthrow of the slaver power. . . is near. Just look at the late acts of Congress, and even now Negroes are not worth one half of what they were before the outbreak of this rebellion. . . One old [man], on being questioned by our boys as to his value said he had been sold for as much as $1,025 but that now he was worth about 3 bits." Their insertion from Rhode Island into a slave state has been eye-opening for Crandall and his comrades, and he writes that "those who were abolitionists before coming here are stronger in the faith and those who were halting and wavering have been brought over in great measure since coming here."

Circular, 2pp, 7.75 x 10 in., "Head Quarters 5th Brigade / Department of the Gulf / Camp Williams." August 29, 1862. Orders issued by Acting Brigadier General Nathan Augustus Monroe Dudley (1825-1910), concerning the detail of African American soldiers. Per this document, "no contrabands will be detailed for service in a Regiment or Corps except under an order contrasigned by the Gen. Com. Brigade." Further, "no detail will be allowed to leave the Negro Camp except in charge of a non commissioned officer. . . who will be responsible for their return." Finally, "Regiments and Corps having Contrabands in their camp without an order are required to send them without delay to the Negro Camp except those employed [as] officer servants."

ALS, 3pp, 4.5 x 7 in., Signal Station near Norfolk, Virginia. December 13, 1863. Addressed to "Frank" and written by Julius Marshall Swain (1835-1911), U.S. Army Signal Corps. In the letter, Swain discusses recent actions taken by General Benjamin Butler (1818-1893), including a decision concerning the military service of formerly enslaved men. He writes in part, "His order in regard to the Darkies is refreshing and Chas. Summer could not have been more flat footed. My boy has decided to join the Colo. cavalry and though I shall miss him much, and have my expenses increased, I can but wish him God speed. The sight of a few black Zouaves and cavalry who are, no doubt, permitted to move around among the brethren has given new impulse to enlistments." Swain also shares that Butler "has laid a heavy hand on the drinking shops and houses of ill fame, as well as Sutler Merchants generally. He means to make it a paying department whether or not from any entirely selfish motives, I can't say."

Documents all with creasing, some with toning/discoloration.