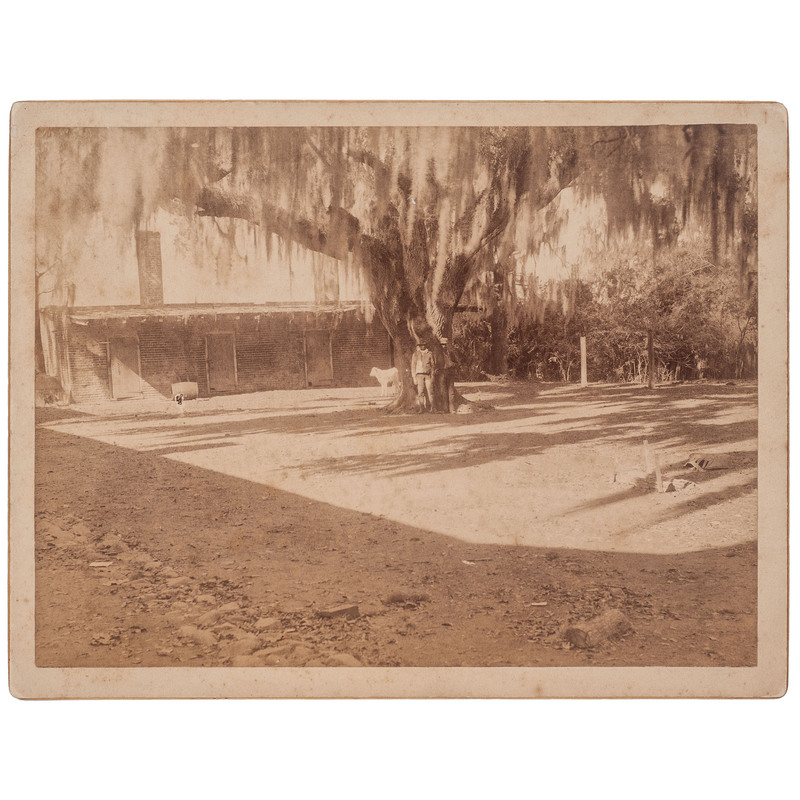 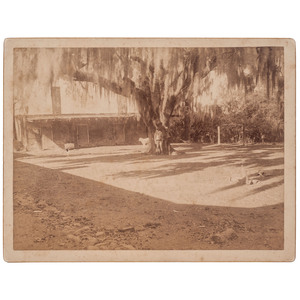 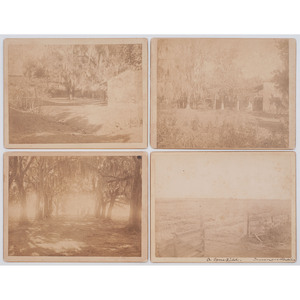 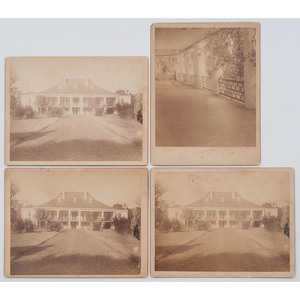 Albumen photographs of the main buildings and grounds of the Ormond and Destrehan Plantations, St. Charles Parish, LA. Most with period inscriptions on verso, and 3 dated November-December 1891. Photographs include 5 views of the Ormond Plantation, showing the front of the residence, two African Americans standing in the back yard, a cane field, and the plantation's "Avenue of Live Oaks" (period inscription verso) -- 4 views of the Destrehan Plantation, showing the residence and upper gallery, 2 of which identify the owner as Judge Emile Rost. Together, 9 photographs, 7 3/4 x 6 in. or smaller, on cardstock mounts. Condition generally good, with toning, some scattered spotting, few with smudges, corner/edge wear and minor loss to mounts.

In the 1780s, Pierre d'Trepagnier was given a tract of land between Lake Pontchartrain and the Mississippi River by Spanish Governor Don Bernardo de Galvez in recognition of his service in subduing the British at Natchez during the Revolutionary War. The main building on the tract of land was completed by ca 1790, and d'Trepagnier resided there with his wife and family until his mysterious disappearance in 1798. The home and grounds were then purchased by Colonel Richard Butler in 1805, who named his new home "Ormond," after his ancestral home in Ireland. In 1819, Ormond Plantation was sold to Butler's business partner, Captain Samuel McCutchon. Upon his death, Captain McCutchon's sons James and Samuel (who married Adele Destréhan, daughter of the owner of neighboring Destrehan Plantation) took over. Following the Civil War, Ormond Plantation was sold a number of times, including twice at public auction, and in 1898, it was purchased by by State Senator Basile LaPlace, Jr. However, within a year, LaPlace was assassinated at the home, and since then, ownership of Ormond Plantation has changed several times.

Constructed in 1787, the Destrehan Plantation is most commonly associated with its second owner, Jean-Noël Destréhan, who served briefly as the first US Senator from Louisiana in 1812 and was influential in the transition of the Orleans Territory to statehood. Between 1839-1840, Judge Pierre Rost and his wife purchased the plantation. While Pierre Rost served as the Confederacy's diplomatic representative in Spain during the Civil War, the home and grounds were seized by the Freedmen's Bureau. The Rost Home Colony was then established and provided freedmen with the opportunity to learn trades and have access to medical and educational aid. Following Pierre Rost's return from Europe in 1865, with a pardon from President Andrew Johnson, he demanded his property back. The home was returned to Pierre Rost, who died in 1868, and his wife and son, Emile Rost, continued to live at Destrehan Plantation until 1910, when Emile sold the property to the Destrehan Planting and Manufacturing Company.