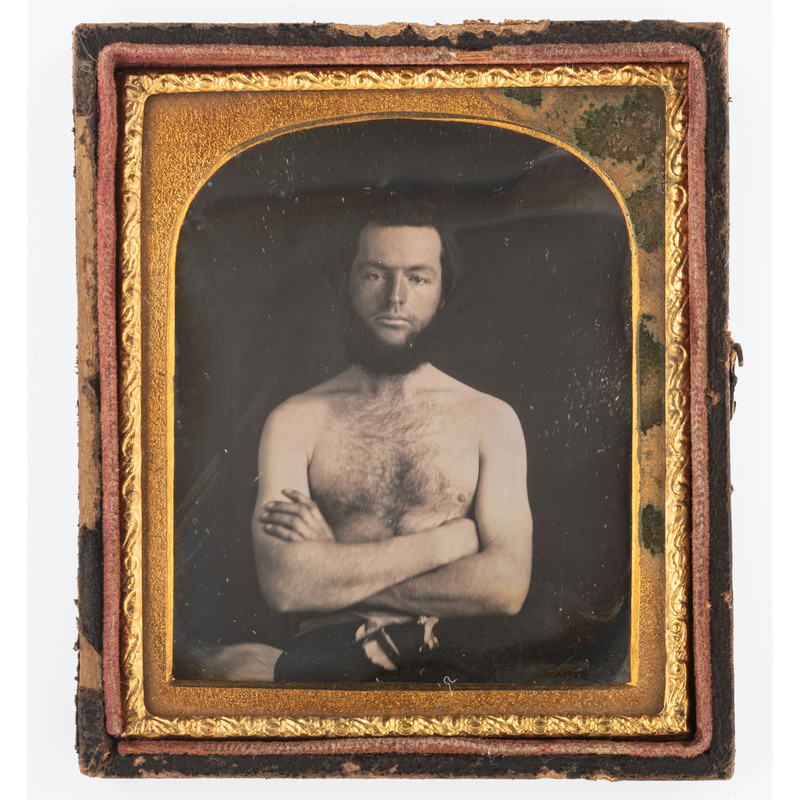 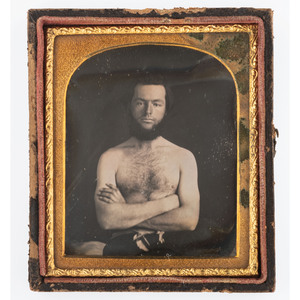 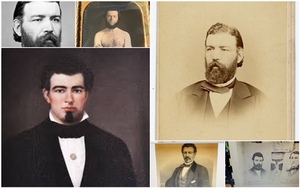 Sixth plate daguerreotype of a bare-knuckle boxer tentatively identified as John Morrissey. N.P., n.d., circa mid-1850s. Housed in half pressed paper case. Pictured shirtless, Morrissey sits with his arms crossed and his chest hair visible as he looks directly at the camera with a disarming and confident gaze. The posture of an undefeated boxer and the confidence of a man who had escapades and a career of legendary status still head of him.

This image is apparently unique. There are only a few early artistic renderings of Morrissey as a young man including an 1860 Currier & Ives lithograph and a painted portrait held at the Saratoga Springs History Museum. There are at least three known photographs of Morrissey, including a portrait taken during his political career by Mathew Brady, the negative of which is held at the Library of Congress's Brady-Handy Collection(LC-BH832-2094). See detail 2 for other known images of Morrissey.

John "Old Smoke" Morrissey (1831-1878) was born in Templemore, County Tipperary, Ireland (then part of the United Kingdom) and his family emigrated around 1833 to Troy, New York, outside of Albany.  Morrissey began working in factories and foundries at a young age, reportedly as early as 12, and became involved in gang violence in Troy. By 1848, he had relocated to New York City and was working as a deck-hand on a steamer running between to Albany. It was here that he is reported to have earned his nickname "Old Smoke." When engaged in a fight with Thomas McCann, he was pinned on a bed of hot coals from an overturned stove. Not to be deterred, Morrissey regained himself and won the fight as smoke rose up from his burning flesh.

Seeking his fortune, Morrissey sailed to San Francisco during the California Gold Rush. Although he was unsuccessful in mining ventures, he did manage to amass a small fortune gambling with prospectors. It was also here that he began to make a name for himself as a professional boxer when he defeated George Thompson at Mare Island, California on August 31, 1852.

With his $5,000 prize and gambling winnings, Morrissey returned to New York and challenged the American Heavyweight Champion, Yankee Sullivan (born James Ambrose, circa 1811-1856). The fight was organized in Boston Corners, somewhat remote to avoid detection by authorities as boxing was largely illegal. With $1,000 a-side stake money and the revised London Prize Ring Rules applied, Sullivan and Morrissey met on September 1, 1853. The fight lasted until the 37th round when a general riot broke out amongst the over 3,000 spectators. For reasons that remain unclear, the referee awarded the fight to Morrissey although Sullivan had dominated much of the bout. One report claimed that Sullivan struck Morrissey with a "foul blow" and yet another claimed that Sullivan left the ring before the decision had been given. Regardless of how he was awarded the victory, Morrissey claimed the Heavyweight title as his own.

After his win, Morrissey became involved in New York City Democratic politics with an association with Tammany Hall. He developed a rivalry with boxer William "Bill the Butcher" Poole who headed up the nativist Bowery Boys gang, enforcers for the Know-Nothing Party. A fight was arranged between the two men on August 8, 1854, and according to a contemporary account in the Lancaster Ledger, Poole threw Morrissey to the ground and pummeled him with "pounding, gouging, bucking and biting" forcing Morrisey to submit including that "Morrissey was horribly beaten and mutilated." In apparent retribution, two of Morrissey's friends shot and fatally wounded Poole 6 months later. Morrissey was indicted for murder but saw the charges dropped after 3 trials resulting in hung juries.

Morrissey would have just one other official fight in his career, against John C. Heenan on October 20, 1858, at Long Point Island, Canada. Morrissey retained his title and would thereafter retire from prizefighting. Despite a relatively short career, he was inducted into the International Boxing Hall of Fame in 1996 as a "Pioneer."

After his retirement, he leveraged his skill at gambling into opening several gambling houses, reputed to have owned 16 casinos at one point. Notably, he established the Saratoga Race Course with the first races held in August 1863. The Club House casino at Saratoga attracted notable guests including titans of industry and politics including Ulysses S. Grant, John D. Rockefeller, and Cornelius Vanderbilt.

With the backing of Tammany Hall, Morrissey ran for United States Congress. Despite his colorful history and convictions, he was elected to 2 terms in the House. Though he became disillusioned with Tammany corruption and broke with the party after his second term, even testifying against William Tweed. In 1875, he ran as an anti-Tammany Democrat and was elected to the New York State Senate. He won reelection in 1877 and would die in office at the age of 47.

Image with original, unbroken seals. Some tarnishing to lower corner and across the top of plate. Light scuff at lower left that appears to be on cover glass. Case without lid.