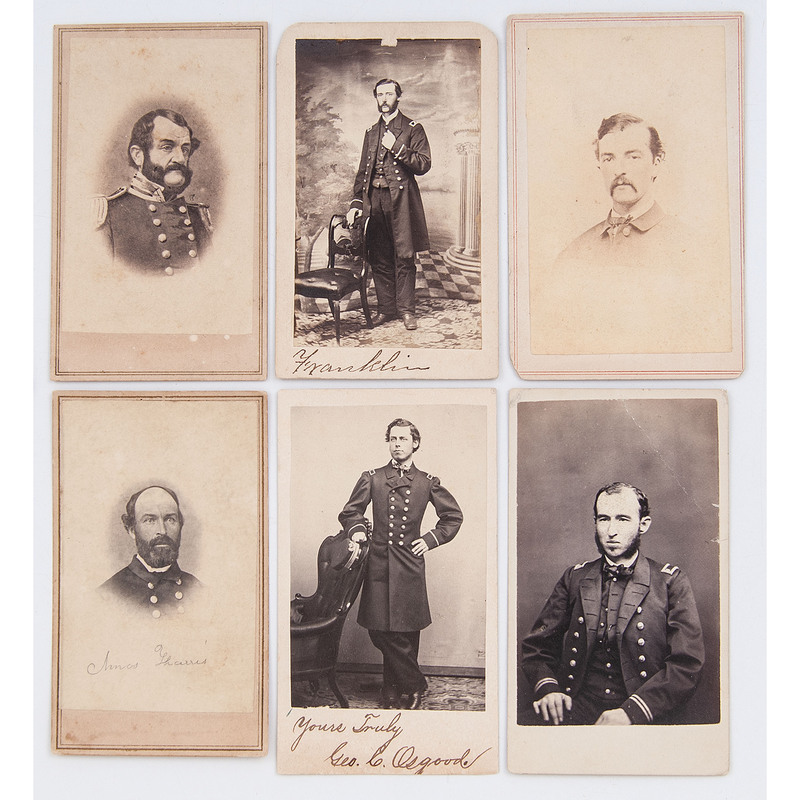 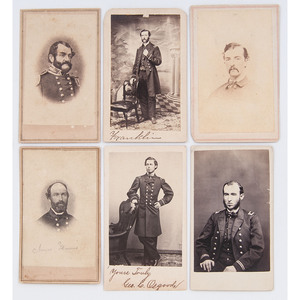 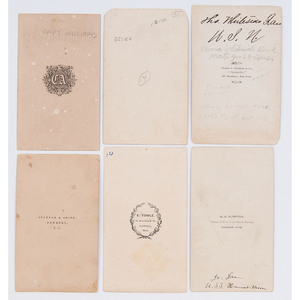 A halo vignette identified in period pencil beneath portrait as "Amos Harris"  with back mark of "Stayner & Smith, Newbern, N. C. "  Harris was a late war commission who served for a year presumably assigned to the South Atlantic Blockading Squadron.  Recorded in the General Navy Register as Acting Third Assistant Engineer 8/1864, Discharged 8/28/65.  No other information found.

A vignette ink identified on verso as "Ths. Whiteside Rack" with imprint of "Fredericks & Co., New York" and penciled notations in the hand of a modern collector.  Thomas W. Rack is listed as Mate 1/30/63, Resigned (sick) 4/20/65. Nothing else known.

Next is a partially identified officer with the surname of "Franklin" without back mark.  The single cuff stripe and presumed anchor insignia on the should strap is indicative of an lieutenant under the 1852 regulations in force until 1862.  Two wartime officers named Franklin held the rank prior to 1862, Samuel R. Franklin promoted Lieutenant 9/14/55, Lieutenant Commander 7/176/62 (Rear Admiral 1885), and Charles Love Franklin, Lieutenant 4/19/61, Lieutenant Commander 3/3/65.  Of the former a level of notoriety is attached having served gallantry at the battle of Hampton Roads and later under Farragut at Mobile Bay, however the only comparable photograph located dates to 1908.  A wartime portrait of Charles Love Franklin (1839-1874) from Find A Grave shows a heavily bearded officer slightly older than the officer depicted here.

A supremely confident young officer standing with hand on hip is ink signed, "your Truly/Geo. C. Osgood" having "S. Towle, Lowell, Mass." imprint.  With some practical medical experience accrued as a civilian, George Cowles Osgood was examined and admitted into the Navy as Acting Assistant Surgeon 2/26/63, Discharged 1/19/66.  Surgeon Osgood was assigned to the USS Chillicothe, an ironclad gunboat that amassed an impressive record on the Mississippi and its tributaries during the war.  Chillicothe joined the White River Expedition in January 1863 and was engaged during the later Yazoo Pass Expedition being heavily damaged by Rebel shore batteries.  Her commanding officer was killed during the Red River Expedition in April 1864.  She was laid up after the war and sold out of service in November 1865.  Surgeon Osgood is noted on a subsequent roster as serving at a shore facility on the eastern seaboard.

A retouched copy vignette identified in modern pencil as "Captain Williams" by "E.A. Anthony."  This older officer with common surname, presumably of some seniority, could not be positively identified.  We note that A Wikipedia entry and corresponding photograph identifies this officer as George N. Hollins, both USN and CSN, but the likeness conflicts with another identified image of Hollins elsewhere in the catalog.

Last is a portrait of a pinched looking medical officer identified in delicate ink as "Dr. Dean/U.S.S. Harvest Moon" beneath "G.H. Plimpton, Foxboro, Mass." imprint.  This is almost certainly Sumner A. Dean, born in Foxboro, Massachusetts March 31, 1837.  Dean had read but not practiced medicine, nonetheless was passed by the Board of Examiners and entered the Navy as Acting Assistant Surgeon 11/25/63, Resigned 7/6/65. The paddle-wheeler Harvest Moon had been taken up from the civilian trade and commissioned in February 1864.  She was assigned to the South Atlantic Blockading Squadron serving as flagship of Rear Admiral John A. Dahlgren at Charleston putting Surgeon Dean in the proximity of distinguished company.  While sailing in Winyah Bay, South Carolina on March 1, 1865 Harvest Moon struck a torpedo and sank in shallow water with Admiral Dahlgren "awaiting breakfast in his cabin."  The admiral and crew were quickly rescued with the loss of one man.