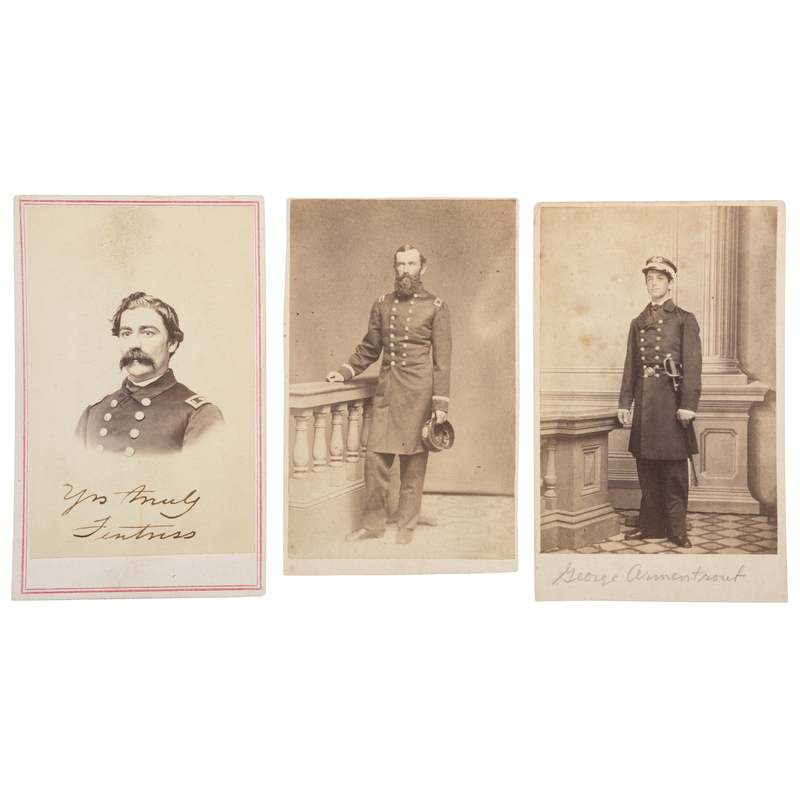 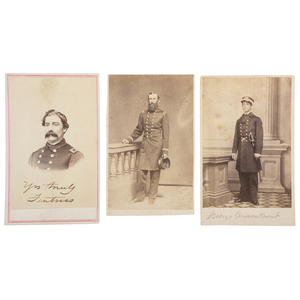 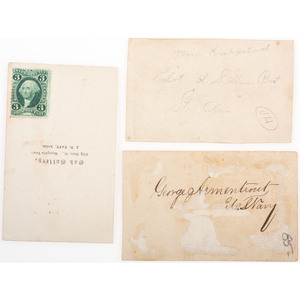 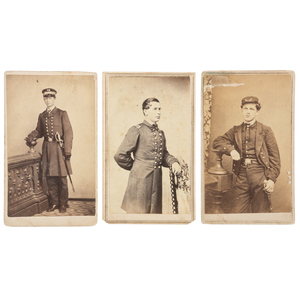 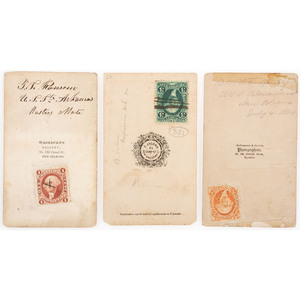 Lot of 6 CDVs of naval officers.

CDV pencil identified on verso as, "Moses Kirkpatrick/Pilot US Gun Boat/St. Clair." Uncredited: n.d. Pilot is not a commissioned rank so Kirkpatrick is not found in the Navy List. USS St. Clair was a stern-wheel streamer taken up from the civilian trade and commissioned at St. Louis on September 24, 1862. The vessel first undertook obscure waterborne "reprisal and indemnity duties" on the Cumberland and Tennessee Rivers followed by convey duty on the Cumberland River in support of operations against Nashville. On February 3, 1862, St. Clair engaged in a three hour bombardment of Confederate infantry near Dover, Tennessee. She continued convey duty through the spring and while passing near Palmyra, Tennessee on April 3 was hit by Rebel shore based artillery crippling her machinery and necessitating towing. Next day the town of Palmyra was burned by the Navy in retaliation. St. Clair underwent repairs at Cairo and rejoined the Mississippi Squadron in June as Gunboat No. 19 for Vicksburg operations. Later in the summer she patrolled the lower Mississippi in support of the Army and was involved in a freak collision with the gunboat USS Hope that consequently sank. During Red River operations St. Clair was ordered to Baton Rouge and engaged Confederate shore batteries below Alexandria "while silencing gun positions at Dunn's Bayou and Wilson's Bend." During Banks' withdrawal she safely transported Union troops back to the Mississippi and "engaged Rebel troops at Eunice's Bluff" on May 15th. Patrolling on the lower Mississippi consumed the rest of the summer until August when St. Clair put into Mound City, Illinois for repairs. From the New Year St. Clair once more escorted troop convoys on the Tennessee River ending the war at New Orleans with the Mississippi Squadron. St. Clair was decommissioned on July 12, 1865 and sold at auction in August.

CDV signed in ink beneath portrait, "Yrs truly/Fentress." J.W. Taft: Memphis, TN, n.d. Green three-cent revenue stamp on verso. This officer is wartime commission Walter E.H. Fentress: mate 12/11/61, acting ensign 8/27/62, acting master, discharged 9/13/67. Fentress was probably a rating and then petty officer with over a decade of service before the war. Although it is suggested in one source that Fentress accompanied Commodore Perry on the expedition to Japan in July 1853, this cannot be otherwise confirmed. During the war Acting Master Fentress was captured on September 13, 1863 by marauding Southern cavalry at Rodney, Mississippi while attending church with "twenty crewmen of the USS Rattler." Fentress was held at the infamous Libby Prison in Richmond until exchanged in October 1864. Fentress later took command of the stern-wheel gunboat USS Mist in March 1865 until she was decommissioned in August. Post-war, Fentress served aboard the USS Canandaigua on the Far East Station before leaving the Navy and returning to Michigan where he lived until 1892. The Fentress Papers, 1858-1892, are in the Collection of Rutgers University Library.

Portrait of young officer armed with sword, having complete inscription in pencil on verso, "D.M. Stauffer USN / USS Alexandria / New Orleans / July 4, 1864," with orange two-cent revenue stamp. Uncredited: n.d. David M. Stauffer (1845-1913): mate 1/5/64, acting ensign 5/25/65, discharged 11/1/65. Stauffer had prior army service in both the 30 day 2nd Pennsylvania Regiment (Militia) during the Antietam, and Battery I, Pennsylvania Light Artillery, of the 1863 emergency troops called into service for Gettysburg. Stauffer was discharged as a corporal in January 1864 and immediately joined the Navy as mate. He was assigned to the small sidewheel steamer USS Alexandria (Gunboat No. 40), a tinclad that operated on the Mississippi between and Donaldsonville, Louisiana and Cairo as a dispatch boat. Alexandria was decommissioned in August 1865 and sold out of service. Stauffer was also an accomplished naval artist, recognized for producing color renderings of river war vessels.

The USS Arkansas was a small screw steamer commissioned into the Navy in June 1863. She was assigned to the West Gulf Blockading Squadron in October and subsequently employed as a dispatch and supply ship to those vessels on blockade duty along the coast of Texas. On September 27, 1863 she took a schooner as prize only to have the seizure rejected as illegal by both the New Orleans Federal District Court and later by the US Supreme Court - an interesting legal aspect of adjudication by prize courts relative to the wartime Navy.

Kirkpatrick carte trimmed back to albumen with moderate wear, G.  Armantrout CDV with average clarity having once been affixed to a mount now pulled away. Ink signature not affected. Soft top corners, else about VG.  Fentress CDV with strong clarity showing a small area of brown toning above the head.  Left corners sharp, right corners dented.  Overall VG. Fentress image