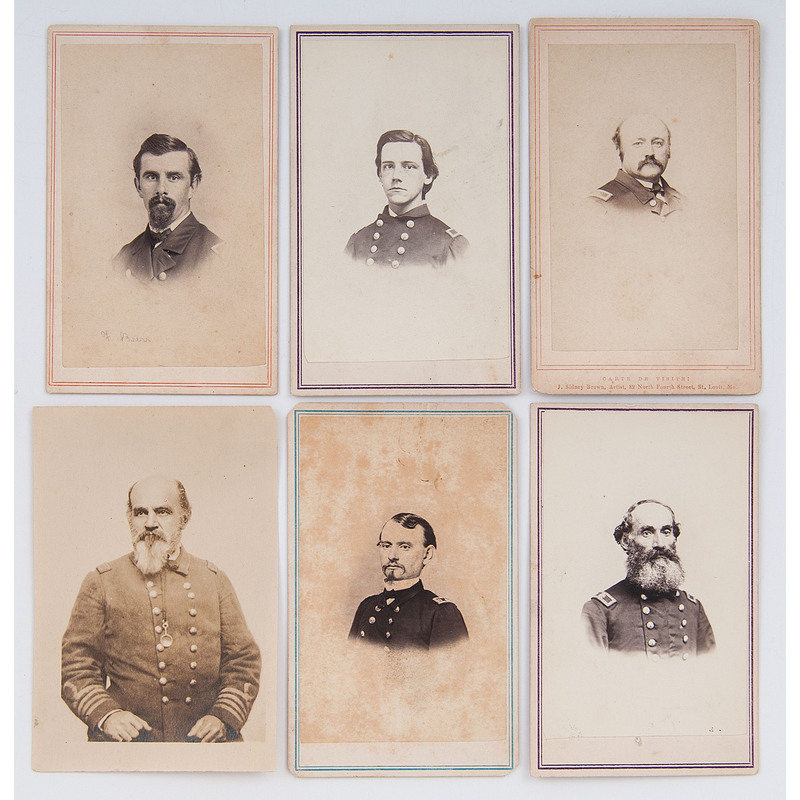 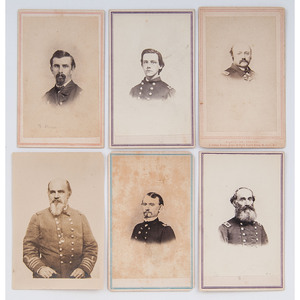 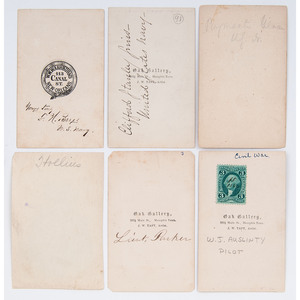 Next is young officer partially ink identified on verso as "Clifford Stanley ? (indecipherable)/United States Navy" with "J.W. Taft, Memphis" back mark.  He is probably a wartime ensign but the shoulder straps are indistinct.

Another vignette is identified twice as "Beers," once in period pencil beneath portrait and again in ink on verso "Your Truly/F.H. Beers/U.S. Navy" having "W.W. Washburn, New Orleans" imprint. Frank H. Beers is recorded as: Mate 11/21/61, Acting Ensign 12/22/62, Resigned 5/10/65.  The January 1, 1865 report of duty billets has Acting Ensign Beers serving aboard the USS Arkansas assigned to the West Gulf Blockading Squadron.  Taken up from the civilian trade in 1863, the screw steamer Arkansas acted as a supply and communications vessel in the Gulf.  On October 10, 1863 she took the schooner Watchful as a prize after discovering a cache of hidden weapons.  It was later adjudicated in Federal District Court (New Orleans) that Watchful had, in fact, been transporting weapons "intended for Mexican Revolutionaries" concluding that the seizure was"destitute of all elements of prize" as the United States was formally neutral in the matter.

The fourth subject penciled "Hollins" is Confederate Commodore George H. Hollins, CSN, formerly United States Navy. The 'old salt' had first joined the Navy in 1814 rising to the rank of captain before being formally dismissed from service on June 6, 1861 and ordered to be placed under arrest.  Having already joined Confederate service, Hollins was promoted captain on June 22 and quickly went about running up a tally of civilian vessels captured on the Potomac!  He took command of the James River defenses on July 10 and soon after was put in charge of naval station at New Orleans on July 31 as Commandant where he commanded a small contingent of converted vessels notably the CSS Manassas, the flotilla successfully deterring the earliest Federal attempt to capture the Crescent City.  Appointed Flag Officer in December 1861, Hollins took command of a composite naval force marshaled in conjunction with the defense of Columbus, Kentucky, then deemed strategically critical as the gateway to the lower Mississippi.  For the duration of the war Commodore Hollins was in charge of the naval station at Richmond (1862-63), Charlotte, North Carolina (1863) , Richmond again (1864), and finally at Wilmington, North Carolina (1865), the last viable seaport connecting the Confederacy to the outside world.   After the war he returned to Baltimore and died there in January 1878. Hollins wears an unusual monocle or magnifying glass suspended from a cord around his neck.

A grizzled, heavily bearded fellow identified on verso in modern pencil as "W.J. Auslinty/Pilot" with familiar "J.W. Taft, Memphis, back mark" and blue-green three cent revenue stamp.  This officer is pictured in The Photographic History of the Civil War, Volume 1, p. 223 over the caption "Heroes of the Wheelhouse" but the extent of his wartime service is unknown.  The title of pilot had traditionally been used on the Mississippi as the challenges to navigation on the river were always formidable.  Pilot was a function and not a formal Navy rank per se, thus "Auslinty" does not appear in the General Navy Register.

Last is a vignette cryptically ink identified on verso only as "Lieut. Parker" beneath "J.W. Taft, Memphis, imprint."  The officer appears to rank as lieutenant based on interpretation of the shoulder strap closet to the camera but this is insufficient to correlate a solid identification from the General Navy Register. It has been suggested that this may be Acting Volunteer Lieutenant John C. Parker, who served as Executive Officer of the Iron-clad Steamer Essex, although this identification cannot be confirmed.