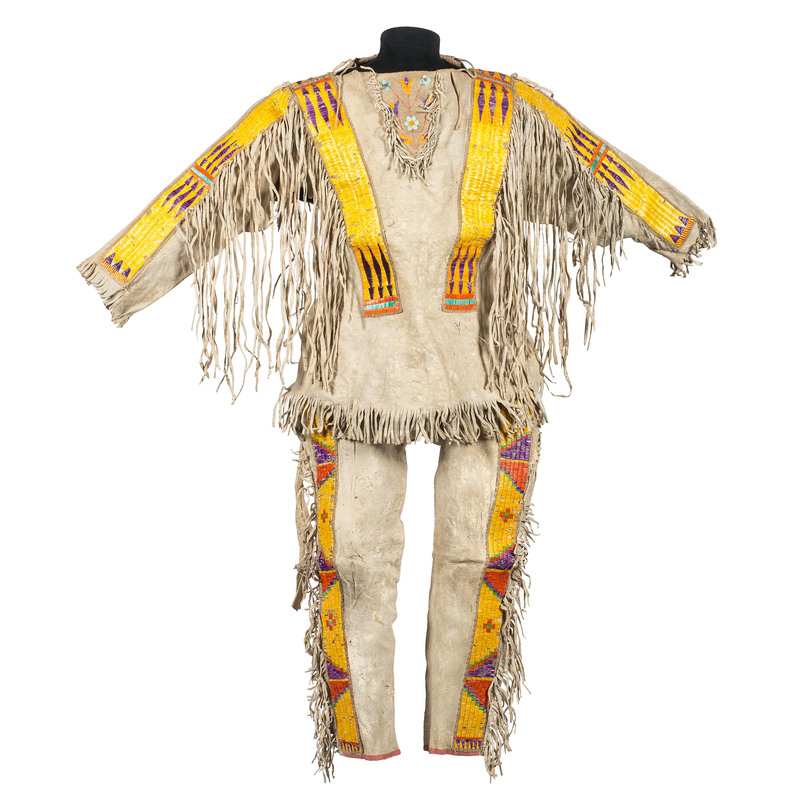 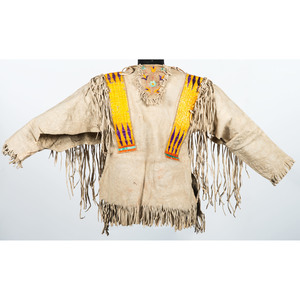 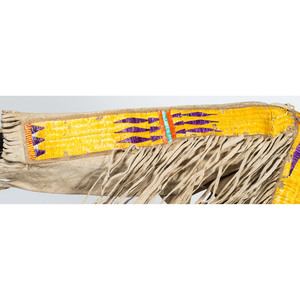 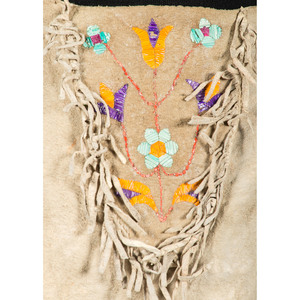 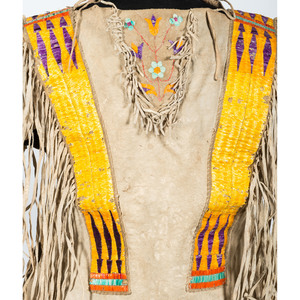 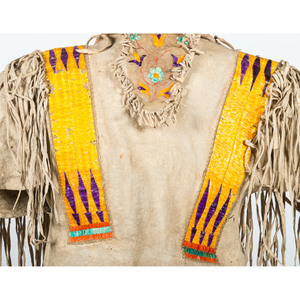 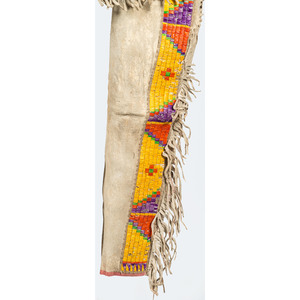 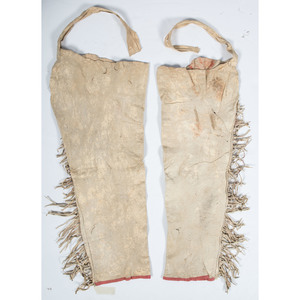 thread and sinew-sewn; with plaited quilled strips in bright yellow, purple, red, and blue on shoulders, chest, and back; bib decorated with floral designs; remnant of red pigment on interior, length of shirt 30 in. x chest 40 in.; PLUS a pair of complementing leggings, length 27.5 in.
late 19th century

Noted in the handwritten memoirs of George Tutherly, the son of General Tutherly:

...after I reached Yates came Fourth of July.  This was an occasion of great celebration for the reservation Indians and for a week some 2000 were camped about two miles from the post.  Their tepees were in a great half circle about a mile in diameter.  This can be dimly seen in one of these pictures.  Each day some form of celebrating was engaged in.  In a little of this a few soldiers took part but mostly it was the Indians own doing.  First there was a big parade of mounted Indians through the post and agency.  The rest was within the circle of the camp and was mostly marching dressed in their finery.  We drove down each day and I took what pictures I could from the carriage.  I had to keep my camera hidden and aimed by guess as the Indians objected to being photographed.  Just superstition I guess.

It was here at Ft Yates that mother collected all of the Indian things except the bow and arrows.  I do not identify on any Indian, the suit that she later bought though it was probably there, but there are some others like it...

HERBERT TUTHERLY was born in Claremont, New Hampshire April 5th, 1848. He entered the U.S. Military Academy in 1868, was graduated in 1872 and assigned a second lieutenant to the 1st Cavalry. He was retired at his own request Oct. 1, 1906 after over 30 years of service. During his Army service General Tutherly was on frontier duty at various parts of the West, which included service in Arizona, Washington, Oregon, Nevada, Kansas, and Montana. During the war with Spain he commanded four troops of the 1st Cavalry in the Battle of San Juan Hill and subsequent engagements in the surrender of the Spanish at Saratoga, July 17, 1898 (“Brigadier General Herbert E. Tutherly obituary.” Army and Navy Journal. August 27, 1927: 1373).

Provenance:Collected by General Herbert Everett Tutherly (1848-1921) and Descended Through the Family

PLEASE NOTE: Condition questions submitted after 12:00 pm ET on Thursday, April 9 may not be answered prior to the auction. 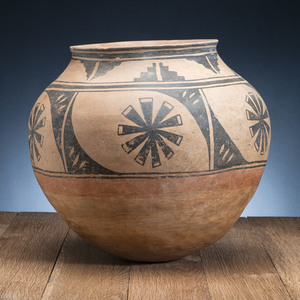