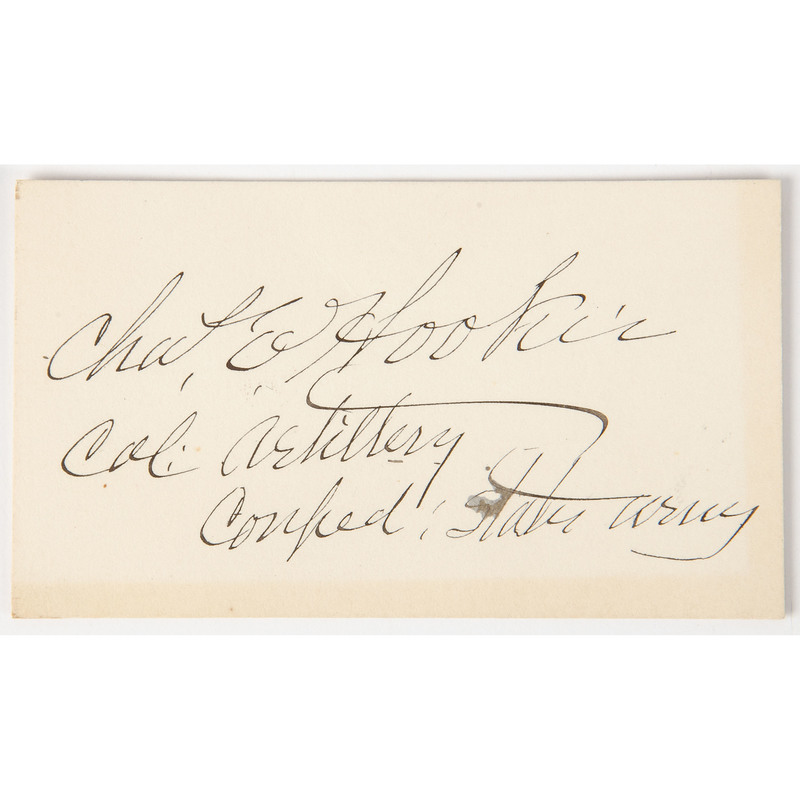 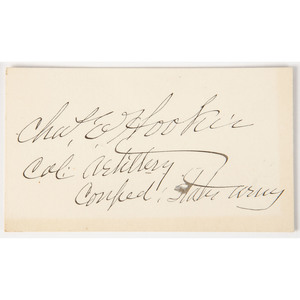 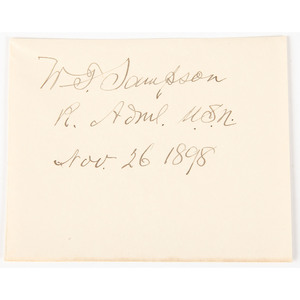 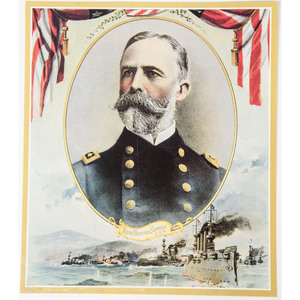 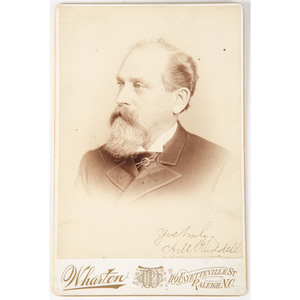 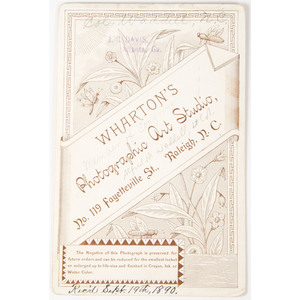 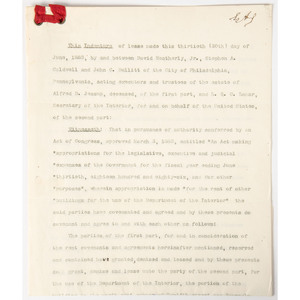 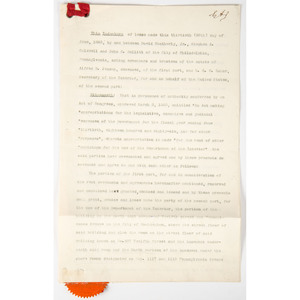 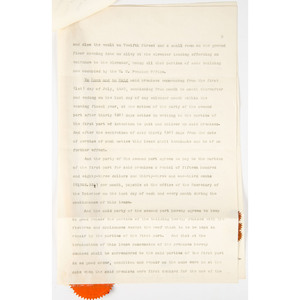 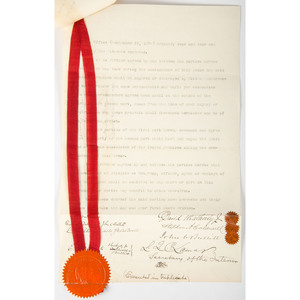 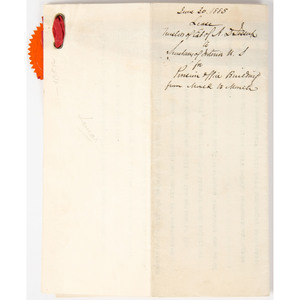 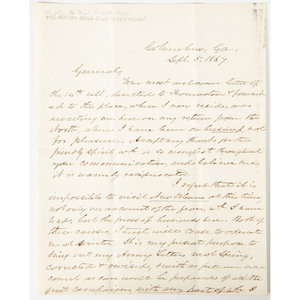 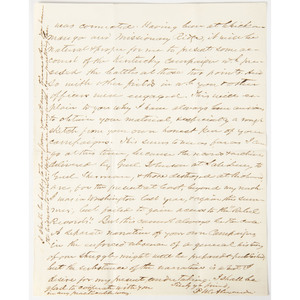 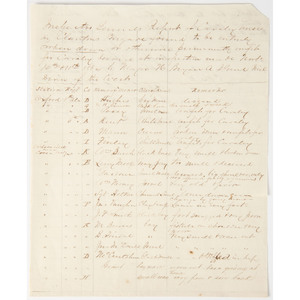 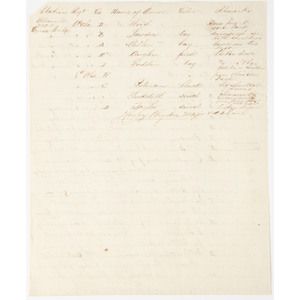 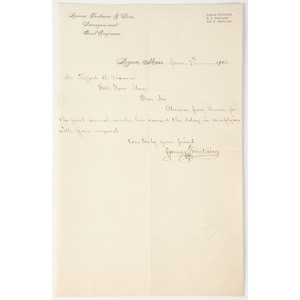 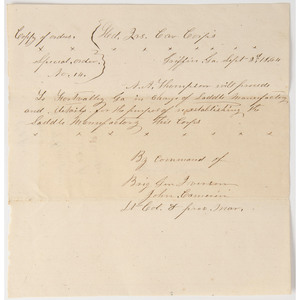 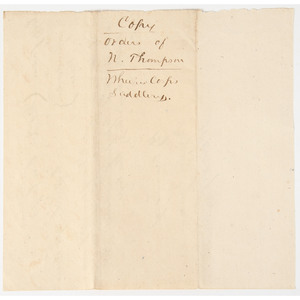 Signed Documents and Photographs, Many Confederates

Calling card, "Chas. E. Hooker / Col. Artillery / Confed. States Army." Charles E. Hooker (1825-1914) left his law firm when the Civil War broke out, enlisting as a private in the First Regiment of Miss. Light Artillery. He worked his way through the ranks to Colonel.

ALS, 1p, 6 x 9.5 in. Lamar Fontaine (1829-1921). Post-war on Lamar Fontaine & Sons / Surveyors and / Civil Engineers stationery, 7 June 1902Henry Bryan. To a client about a delay in services requested. Fontaine ran away from school at age 10 and was captured by the Comanche. He was released 4 years later. He served in the Navy during the Mexican-American War. He was a surveyor for a southern railroad claims to have explored the Amazon River with William Herndon, Israel (where he drafted maps). He also mapped Russia and parts of the Great Wall of China. He went with Matthew Perry to Japan and defeated the Malay pirates. He also claims to have participated in the Crimean War. He joined the Confederate Army during the Civil War and claims to have been wounded 67 times. Some sources indicate he was a spy for much of the conflict. After the war he joined the KKK and published a number of articles and books, some about the "invisible empire."

Bryan, Henry, Major, CSA. ADS, 2pp, 7.75 x 10 in. "Inspector Generals Report for Cavalry horses in Clantons Brigade found to be entirely broken down or otherwise permanently unfit for Cavalry Service at inspection made Novbr. 10th & 11th 1864 by Major H. Bryan...." His inventory has columns for Station, Regt. Company, Owner, color of animal and remarks. In the last column, some of his remarks include: "diseased;" "unfit for Cavalry;" "Broken down & unfit for Cavalry;" "too small & diseased;" "very small & worn out;" "very poor & sore back;" "lame in two legs;" etc. Born in Savannah, GA, Henry Bryan (1835-1879) joined Brigadier General John Magruder's staff as aide-de-camp. He was wounded at Malvern Hill (July 1, 1862) and recovered a few months later, serving the remainder of the war as Assistant Adjutant and Inspector General in Charleston, SC.

ALS , 2pp, Columbus, GA, 5 Sept 1867. Addressed to Genl. Braxton Bragg. Peter Wellington Alexander (1825-1886) was admitted to the Georgia Bar and also reported for the local paper in Thomaston, Ga. During the Civil War he served as a correspondent for the Savannah Republican, with a focus on the common soldier. His descriptions of soldiers "ragged, barefoot and hatless," many not recovered from earlier wounds, their clothes with bullet holes and the dust of battle (published in late September), inspired many southerners to help supply clothing, shoes, etc. for the army in the coming winter. In this letter, he requests any views of the war that Bragg might have, telling the General that he is working on his history of the war from the everyday soldiers' viewpoints.

Lamar, Lucius Quintus Cincinnatus II (1825-1893). TDS, 3pp, 7.75 x 12.125 in., [Washington, DC], 30 June 1885. Indenture for the lease of several buildings along Pennsylvania Avenue for use of the Department of the Interior. Also signed by Stephen Caldwell, John Bullitt (of the Insurance, Trust and Safe Deposit Company of Phila.) and David Weatherly Jr., each with small paper seal; with Department of the Interior seal and ribbons.

Lamar represented Mississippi in both the House and Senate; He was serving in the House when was was declared. He resigned and joined the Mississippi Secession Convention, drafting the Ordinance of Secession. He and his law partner raised a regiment and funded them out of his own pocket. Lamar was commissioned Lt. Col. (his partner was Col.) of the 19th Mississippi Infantry. Suffering an attack of vertigo, he fell on May 15, 1862, ending his time in Confederate service. He served as Judge advocate and aide to his wife's cousin, Lt. Gen. James Longstreet, and later in 1862 Jefferson Davis appointed him as minister to Russia and special envoy to the UK and France.

After the war he returned to the University of Mississippi and served on the state constitutional convention. He returned to the House of Representatives in 1873, then represented his adopted state in the Senate fro 1877 - 1885. President Grover Cleveland appointed Lamar as Secretary of the Interior in 1885, and he served until 1888. When confirmed by the Senate, he took his place as associate justice of the US Supreme Court, the first Southerner appointed to the court after the Civil War and the only Mississippian to ever serve.

Waddell, Alfred Moore (1834-1912), cabinet card signed on recto. Photographer's identification of Wharton, Raleigh, NC. Wadell was commissioned an adjutant (CSA) in 1861, rising eventually to Lt. Col. Poor health forced his retirement in 1864. Before the war, Waddell had opposed secession. After the war he was elected to Congress in 1870. He was also involved locally with the "Party of the White Man," attempting to restore the antebellum status quo. They employed a number of methods, including simply ignoring the law. Later they would use more inflammatory language and incited what Waddell would label (and he is thought to have coined the term) "race riots." In Nov. 1898, the "White Men" raided Wilmington's armory, then destroyed the office of "The Daily Record" for publishing a supposedly defamatory article on white women. They then moved to the black neighborhood and destroyed businesses and presses owned by blacks. Waddell forced (at gunpoint) officials in Wilmington, including the mayor, police chief and city aldermen, to resign - the only coup d'etat to occur on American soil.

Sampson, William T. (1840-1902), Rear Admiral. Signed paper, 3 x 4 in., dated Nov. 26, 1898. Born in Palmyra, NY, Sampson entered the US Naval Academy in September 1857. He graduated first in his class in 1861, then served as an instructor at the Academy. 1864 found him an executive officer on the Patapsco of the South Atlantic Blockading Squadron, sweeping torpedoes off Charleston, SC. He spent the post-war years teaching, on sea duty, and even did a bit of time at the Naval Observatory. He is best known for his victory at the Battle of Santiago de Cuba in the Spanish-American War.