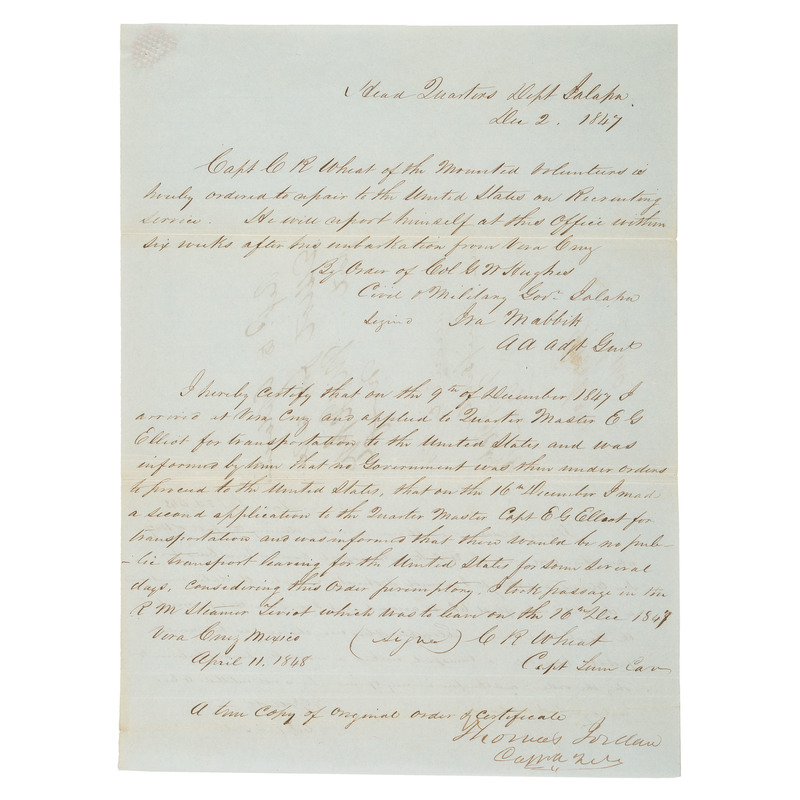 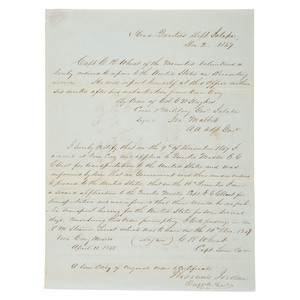 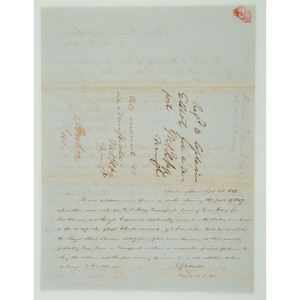 Signature of Thomas Jordan, on Document Pertaining to Chatham Roberdeau Wheat and Signatures of 9 Other Confederate Generals, Plus

Wheat adds a note that he went to Vera Cruz as ordered and tried to secure transport to the States on December 9 and December 16. He was told both times that there was no ship scheduled going to the States, so Wheat booked on a British steamer headed that direction. He seems to have been trying to secure compensation for his expenses and secured this copy to do so. Below the previous two messages is: "A true copy of original order & certificate." Signed Thomas Jordan.

According to the docket, this copy was then submitted to E.G. Elliot, the Quarter Master who told Wheat there was no transport, for a report. Elliott wrote a paragraph on verso that there was seldom a week when there was no transport from Vera Cruz, and suggested that Wheat was not entitled to any mileage. The officer who referred this to Elliott then came back and noted "This account is inadmissible."

Chatham Roberdeau Wheat (1826-1862) was a captain during the Mexican War and a major in the Confederate Army during the Civil War. He was also a lawyer, Louisiana State Representative adventurer and occasional mercenary. Born in Virginia, his family moved to Louisiana when he was a young boy. He left Mexico in part because of illness, and while in New Orleans, was elected to the state legislature.

When the Civil War broke out, Wheat enlisted a Battalion of "street toughs" from around the docks in New Orleans, the "Louisiana Tigers." The lot consisted of Germans, Irish and natives of New Orleans. The Tigers made it to Maryland in time for the first Battle of Manassas Junction. They fought well, but had a few disciplinary problems. After the battalion was placed under the command of Brigadier General Richard Taylor in November, there was some conflict with the "Tigers." The conflict ended when Taylor ordered the execution of two Tigers for drunkenness and insubordination. The unit served in Jackson's Valley Campaign and on the Peninsula. Wheat was mortally wounded at Gaines' Mill in June 1862, dying in Virginia, the state in which he was born. Later in the war, another unit adopted the name "Louisiana Tigers" in honor of Wheat.

Thomas Jordan (1819-1895) was also born in Virginia. He received an appointment to USMA, graduating in 1840. He was sent first to Fort Snelling, Minnesota, then went to Florida to fight Seminoles, then back to the western frontier before the Mexican War broke out. Jordan remained in Vera Cruz for a year after the war in administration. He could see in the events leading to secession that trouble was brewing. He began a pro-Southern spy network in Washington, DC that was especially active in the early months of the war. Jordan resigned from the US Army in May 1861 to enlist in the Confederate Army as a Captain. He was rapidly promoted and became a brigadier general by April 1862 for his actions at Shiloh. Control of the Washington spy network was turned over to Rose O'Neal Greenhow, but Jordan continued to receive her information as her "handler." For much of the war, he was with Beauregard in the Western Theater, then chief of staff to Braxton Bragg. When Beauregard was sent back to Charleston, Jordan accompanied his friend as chief of staff.

Clipped signature "M.C. Butler / S.C. / Washington / April 21st 92" on approx. 1.5 x 4.75 in. paper. Matthew Colbraith Butler (1836-1909) was an attorney and Senator from South Carolina. During the Civil War he served in the ANV as a captain in the 2nd South Carolina cavalry, eventually attaining the rank of Brigadier General. He also had service in the US Army during the Spanish-American War.

Clipped signature "T.L. Clingman, Abbeville N.C." 1.75 x 6 in. Thomas Lanier Clingman (1812-1897) was a US Representative 1843-1845, 1847-1858, then a US Senator representing North Carolina from 1858 until the start of the war. At first he refused to resign his senate seat, but was expelled by the Union Senators. He then enlisted as a Brigadier General in the Confederate forces.

Signature on paper slip "Howell Cobb / Athens / Ga." 2.5 x 5.5 in. Howell Cobb (1815-1868) was a 5-term member of the House of Representatives, and served as Speaker from 1849-1851. He was Governor of Georgia 1851-1853 and Secretary of the Treasury 1857-1860 (under James Buchanan). Cobb is known as one of the founders of the Confederacy, even serving as its first executive for two weeks until Jefferson Davis was elected as President. He then joined the Confederate Army and was commissioned colonel of the 16th GA Infy., later becoming a Brigadier General and commanding a brigade in the ANV.

Clipped signature "F.M. Cockrell" under typed "Yours sincerely," so from a later letter when typewriters were in use. Approx. 1 x 4.25 in. Francis Marion Cockrell (1834-1915) joined the Missouri State Guard at the beginning of the war as a captain. The unit was then mustered into Confederate command as the 2nd Missouri Regt. Cockrell commanded a brigade at Vicksburg and was wounded during the siege of Vicksburg. He was promoted to Brigadier General in mid-1863 and fought many battles of the Atlanta Campaign. He developed into what some have described as one of the finest combat generals of the war, in spite of not having any earlier military training. After the war he served in the US Senate, then on the Interstate Commerce Commission (1905-1910), he helped negotiate the Texas/New Mexico boundary, and was a civilian member of the Board of Ordnance and Fortifications, serving until his death in Washington, DC.

Signature on paper, "J.L. Kemper / 27 March 1875." 1.75 x 4.5 in. James Lawson Kemper (1823-1895) was born on a Virginia plantation. He had no military training, but his father and a neighboring planter (Henry Hill) set up a kind of "summer camp" on the plantation to train the young boys. One of those other boys was A.P. Hill, and the two became lifelong friends. He came of military age just as war was being declared in Mexico. He was appointed QM and met many future military men, but saw little fighting. Running for political office as a pro-slavery, anti-abolitionist, pro-states' rights candidate, he was elected to the Virginia House in 1853. Five years later he was a brigadier general in the Virginia militia. He became Speaker of the state assembly, at the same time as his service in the Confederate Army. He was Colonel of the 7th VA Infy and led his regiment at First Bull Run/Manassas. He fought at Antietam, was in reserve at Fredericksburg and saw action on the third day at Gettysburg. By the end of the war he was Major General.

Signed calling card and CDV of Fitzhugh Lee. Card 2 x 3.25 in. CDV of Lee in Confederate uniform, no photographer's ID. Fitzhugh Lee (1835-1905) was the son of Sydney Lee, a captain in the Confederate Navy and the older brother of Robert E. Lee (thus, Fitz Lee was General Lee's nephew). Fitzhugh graduated from USMA in 1856 and was assigned to a cavalry unit commanded by Albert Sidney Johnston (R.E. Lee was Lieut. Col. of the unit). He was involved in fighting Indians before being appointed instructor of cavalry tactics at West Point in May 1860. He, along with many other academy graduates, resigned his commission when their home states seceded and joined the Confederate forces. After the war he served as the 40th Governor of Virginia (1886-1890).

Signed calling card, "Wm. Mahone / Maj. Genl. C.S.A." William Mahone (1826-1895) was a civil engineer and railroad executive who served the Confederacy as a general in the Civil War. He was responsible for the counter-attack that resulted in the defeat of Federal forces after the mine explosion at Petersburg.

Clipped signature "Dabney H. Maury / Major Genl Com[dg?]." Dabney Herndon Maury (1822-1900) graduated from the University of Virginia in 1841, then attended USMA, graduating in 1846, just in time to serve in the Mexican-American War. He was wounded at Cerro Gordo and sent home to recuperate. After that war he was an instructor at USMA from 1847-1852. He then fought Indians in Oregon Territory and Texas before commanding the Cavalry School at Carlisle Barracks in 1858. His Tactics for Mounted Rifles became a standard textbook. He ended the Civil War as a Major General in the Confederate Army, having resigned his Federal commission at the beginning of the fighting.

Clipped signature, "E.W. Pettus, Ala.," likely signed as Senator from representing that state. Edmund Winston Pettus (1821-1907) was a native of Alabama and served with that state's volunteers during the Mexican War. When the Civil War erupted, Pettus raised the 20th AL Infantry. Most of his service was in the Western Theater, including Vicksburg (after which he was promoted to Brigadier General), Chattanooga and Atlanta Campaigns. The Edmund Pettus Bridge in Selma is named for the politician. This, maybe fittingly, became the focus of the Civil Rights movement in the 1960s. Pettus was a US Senator later in life. Some have suggested that he was selected for this position (at a time when Senators were appointed by the legislature rather than elected by the people) because of his influence as Grand Dragon of the Ku Klux Klan. In March 1965 over 500 marchers on their way from Selma to Montgomery, Alabama were turned back on the bridge and attacked by state troopers and Klansmen. Marchers were successful in crossing the bridge two weeks later. In 2015, then-President Obama, former President George W. Bush and many veterans of the civil rights marches of the 1960s again crossed the Edmund Pettus Bridge commemorating the 50th anniversary of that event.

Plus cabinet card of Eppa Hunton (1822-1908). Hunton's name is printed on verso in pencil, but we can't confirm it is in his hand. It could be a previous owner's label. Hunton rose to become a Brigadier General during the Civil War and served in both the US House and Senate representing Virginia after the war.

And lithograph with facsimile signature of J.B. Gordon in his Confederate uniform. Printed on 8 x 10.5 in. heavy paper stock. John Brown Gordon (1832-1904) became one of Lee's most trusted generals by the end of the war. After the war, he served his home state of Georgia in the US Senate and became 53rd Governor of the state.