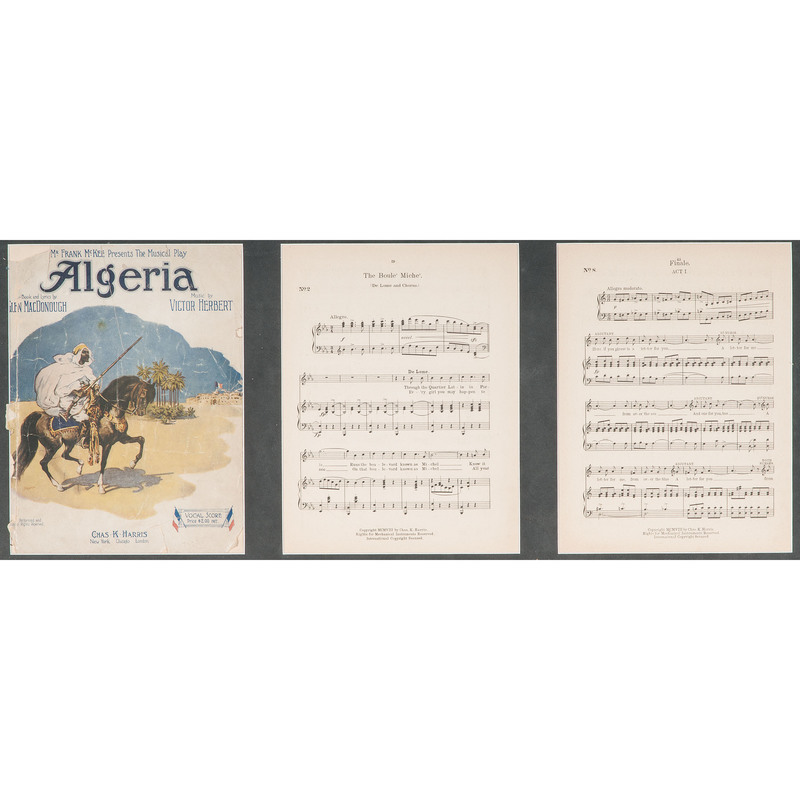 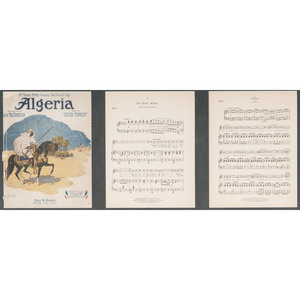 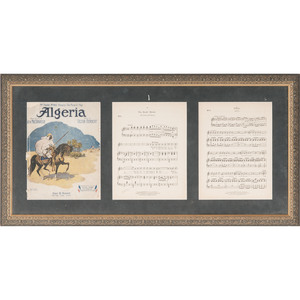 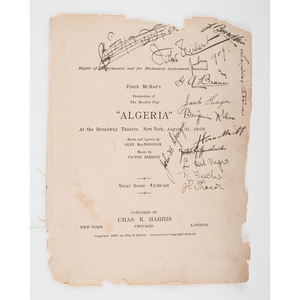 Cover and two pages from the musical score for "Algeria," book and lyrics by Glen MacDonough, music by Victor Herbert, produced by Frank McKee (1908) and Lew Fields (1909). The "title page" from the operetta, is for "Algeria" at the Broadway Theatre, New York, August 31, 1908. At the top are three bars, presumably from this operetta, signed "Victor Herbert / July 1909." It is also signed by eleven others. We have looked at the cast lists for both the 1908 and 1909 productions and none of these names appear, so they are most likely orchestra members (for 1909, at least) - J. Borodkin, Leonidas Verona, G.A. Braun, Jacob Slager, Benjamin Kohan, John M. Spargue, J??? Pfiffenschneider; L. Del Negro; R. Fuchs, JC Thoedr(?), plus one unreadable.

Algeria opened at the Broadway Theatre on August 31, 1908 and ran through October 10 of that year under production by Frank McKee (48 performances). It reopened under the name "The Rose of Algeria" at the Herald Square theater on September 20, 1909 and ran for a month (23 Oct.), then opened at the West End Theatre on Nov. 15 and is thought to have run through the remainder of at least November (48 performances).

Victor August Herbert (1859-1924) was born in Ireland, but lost his father at the age of three. His mother moved in with her parents in London. His maternal grandfather was novelist, playwright, composer, Samuel Lover, and many of his close associates worked in similar or related areas of music and art. When Victor was about 8, his mother married a German physician, and mother and son moved to Germany. Although he considered a career in medicine, family finances prohibited the high tuition for such a path in Germany, so he studied several musical instruments, finally settling on cello. He later studied music theory and composition.

Herbert had a successful career in Stuttgart and other German towns, both as a cellist and conductor. He married soprano Therese Forster and in 1886 the couple moved to the United States to join the Metropolitan Opera in New York City. He became a major player in the New York musical scene, again as a cellist. Within a couple years, he was composing and conducting. He also became active in gaining the rights for composers to profit from their compositions, even testifying before Congress as it developed the Copyright Act of 1909. Herbert was a leader in the formation of the American Society of Composers, Authors and Publishers, better known by most Americans as ASCAP.

Herbert composed operettas from the mid-1890s through the first decades of the twentieth century. WWI changed American tastes in music and theater with jazz, ragtime and new dances. Herbert tried to switch to comedy and Broadway production numbers (most as part of a larger group of writers and musicians). He contributed to Ziegfeld Follies from 1917-1924. Although he supported himself, he was never again as successful as he had been as the composer of 43 operettas.  He succumbed to a heart attack in May 1924 after the opening of "The Dream Girl" in New Haven, CT.

Covers with some folds, chipping, surface soil. Internal sheets clean. Frame is 17 x 33.25 in. and fairly heavy. Signed page is not in frame at present.