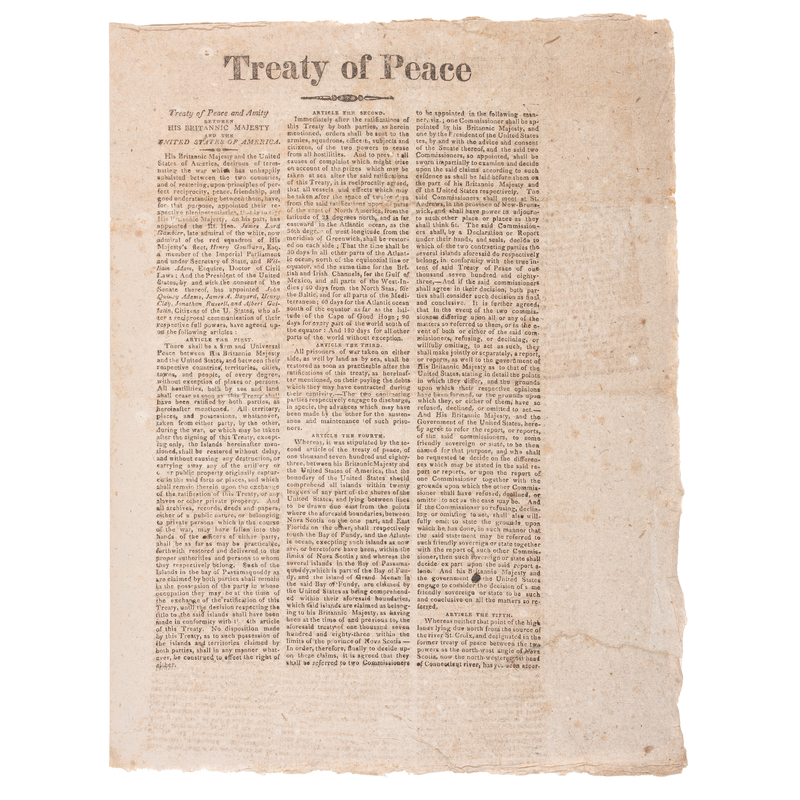 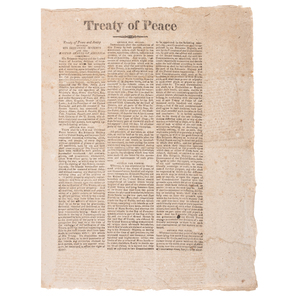 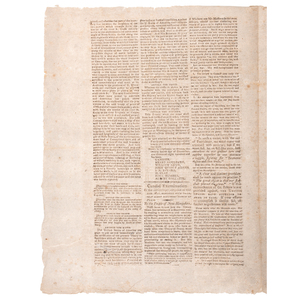 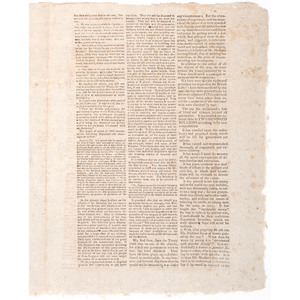 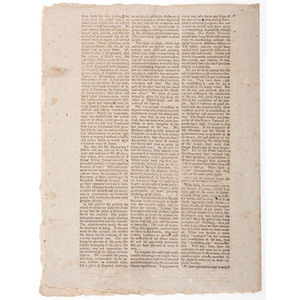 Broadside. Treaty of Peace. No publisher information, n.d.; [Portsmouth, NH: The Portsmouth Oracle edited by Charles Turell, ca late January 1815]. 4pp, 10.5 x 14 in. Text printed in three columns, 7.25 x 12.25 in. Broadside publishing the not yet ratified Treaty of Ghent, ending the War of 1812, with an editorial criticism.

Broadside begins with a brief introduction of the Treaty of Ghent and names the plenipotentiaries for both Great Britain and the United States including, "John Quincy Adams, James A. Bayard, Henry Clay, Jonathan Russell, and Albert Gallatin, Citizens of the U. States," followed by the eleven articles of the Treaty. After the names of the signees begins a "Candid Examination of the Advantages Obtained by the Late War, Compared with Those, that Might Have Gained By Peace." Addressed "To the People of New Hampshire," the editor (almost certainly Charles Turell), writes a lengthy criticism of the War of 1812 and President James Madison. He details how the War failed to achieve few, if any, of its objectives, the considerable losses, and especially notes that the war has "swelled our national debt to TWO HUNDRED MILLIONS according to the best computations."

Though undated, the broadside was almost certainly published between mid January and early February 1815. The treaty was signed on December 24, 1814 but news did not arrive to the United States until nearly a month later, resulting in the Battle of New Orleans (January 8, 1815). The editorial appears to reference Jackson's celebrated victory: "The blaze of glory, which has surrounded our gallant navy, the martial spirit, skill and prowess, which have shone conspicuous in some of our military commanders and the bravery of our troops, have redeemed the nation from the deep and humiliating disgrace, to which the two first campaigns seemed to consign it." It is also evident that the broadside was published prior to the ratification of the treaty on February 16th.

Later variations of this broadside, while scarce, do exist with notable differences. One copy, held in the Historic New Orleans Collection, is much abbreviated with four columns on the recto of a single leaf, with the "Candid Examination" extremely reduced. A second and undoubtedly later copy held by the Phillips Library at the Peabody Essex Museum, is very similar in layout to the HNOC copy but excludes the Examination entirely and has been published after the ratification of the treaty as noted in the preamble and the inclusion of the ratification by Madison and Acting Secretary of State James Monroe. Notably, however, the Phillips copy has a brief introduction by way of a letter from Lewis & Hall of the Commercial Advertiser dated Feb. 19, 1815 to Charles Turell, Editor of the Portsmouth Oracle. While the copy offered here does not have any publication information printed, it was almost certainly also published by Turell and the Oracle. The version offered here appears to be the earliest printed of the three and is the only located copy.

Expert repair to tear on lower corner of first leaf.