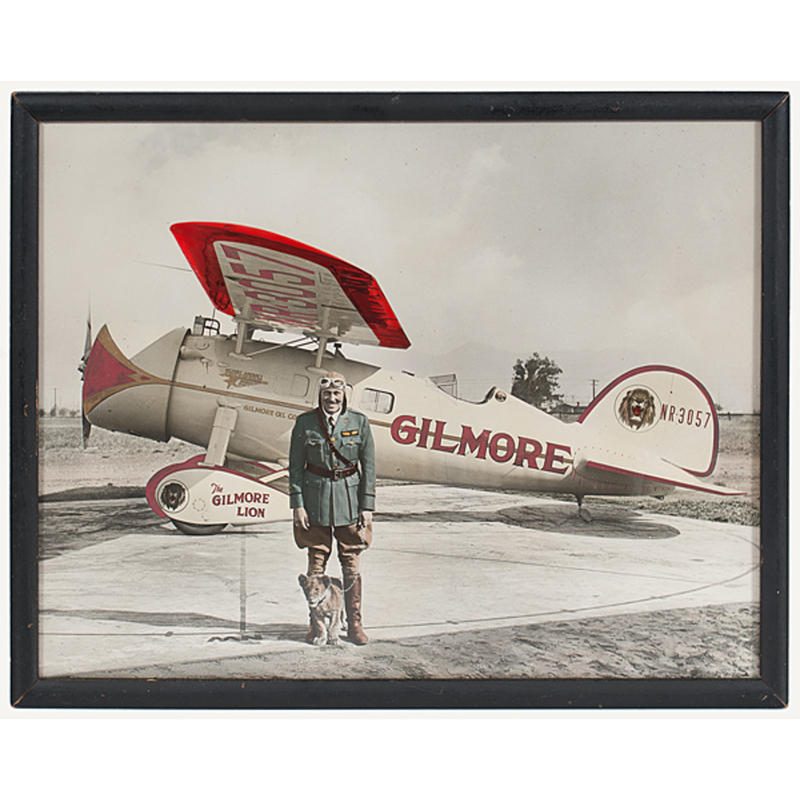 Lot of 4.
A hand-tinted silver gelatin of Roscoe Turner with his pet lion, Gilmore, in front of the plane named after his pet. Measures 14 x 11 in.
A pamphlet by Roy Rutherford titled, Colonel Roscoe Turner Knight-Errant of the Air. Signed by Roscoe Turner. 36 p.
A small card with a lithographed portrait of Turner. No. 4 of 25 offered in boxes of Heinz Rice Flakes and Heinz Breakfast Wheat boxes.
A hardback book,  Roscoe Turner Aviation's Master Showman by Carroll V. Glines. Published by the Smithsonian Institution Press: Washington, D.C., 1995. 340 p.
Roscoe Turner (1895-1970) was a master showman in the world of aviation. His charisma and handsome penciled mustache made his a celebrity on the silver screen as a dashing pilot in Howard Hugh's Hell's Angels and an expert salesman for several companies. He was a record breaking American and a  three time winner of the coveted Thompson Trophy air race. His colorful style and curious pet made him an aviation icon. After he retired, he opened a flight school in Indianapolis that trained flight instructors, pilots,and mechanics. It became very active in helping the national war effort during the Second World War. Congress awarded him the Distinguished Flying Cross in 1952 for his contributions to aviation development and pioneering in speed flying. It was the first to be awarded in over 20 years and only one of six to be awarded by Congress. Contrary to his exciting, speed-filled life, Turner peacefully died in 1970. The National Aviation Hall of Fame enshrined and inducted him in 1975.

Condition:All items are in excellent condition. The silver gelatin has not been observed outside of the frame but seems to be well preserved.