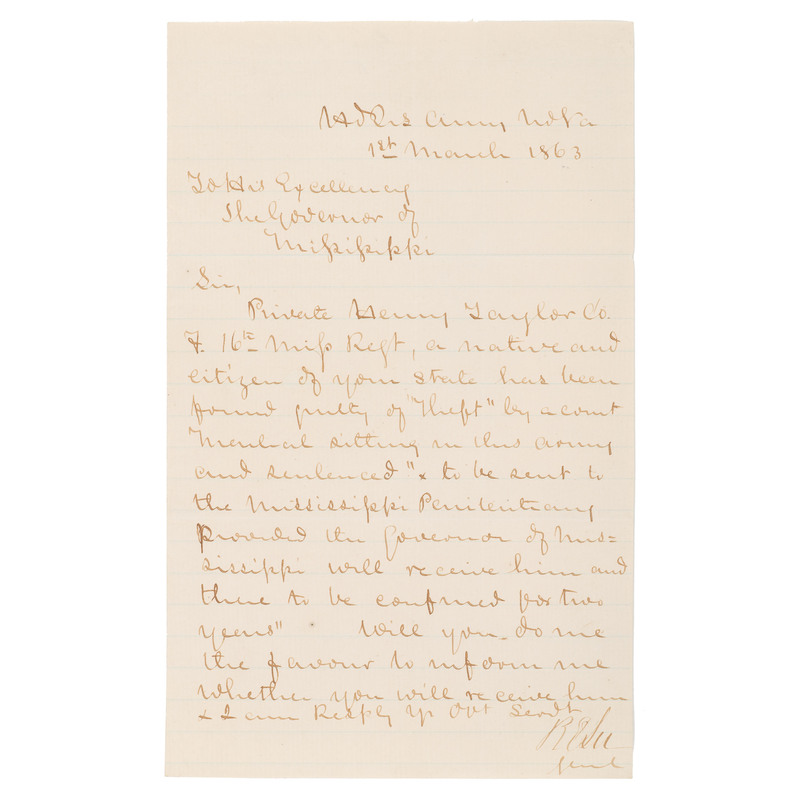 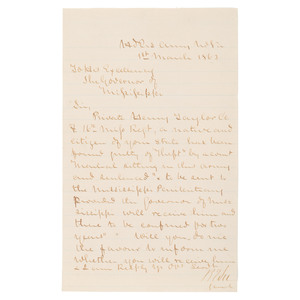 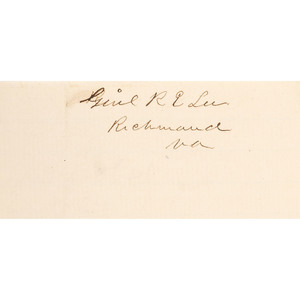 Lee informs Pettus that "Private Henry Taylor, Co. F, 16th Miss. Regt., a native and citizen of your state has been found guilty of 'theft' by a court martial. . . in this army and sentenced 'to be sent to the Mississippi Penitentiary provided the Governor of Mississippi will receive him and there to be confined for two year.'" Lee closes by asking Pettus to respond with his decision.

Henry L. Taylor enlisted in Co. F, 16th Mississippi Infantry, also known as the "Jasper Greys" as a private on March 3, 1862. Attached to the brigade of General Isaac R. Trimble, the Jasper Greys participated in several key Civil War battles, including Cross Key, Malvern Hill, Second Manassas, Antietam, and Fredericksburg. However, muster rolls from early 1863 show that Taylor was "in arrest or confinement," and by March-April 1863, he is listed as "in prison by sentence of court martial." According to General Orders No. 133, issued December 7, 1862, Taylor's sentence for the theft was "to have his head shaved. To be labelled with the word 'theft;' marched through camp wearing a barrel" (General Orders and Circulars of the Confederate War Department, 1861 – 1865). The sentence appears to have been remitted, and Taylor was to be transferred, presumably to the Mississippi State Penitentiary. It is unclear whether Pettus refused Lee's request to accept him, or the transfer went awry in some other way, but records indicate that Taylor was sent to a hospital in Richmond, VA for treatment of constipation on September 22, 1863. He was then transferred to Castle Thunder, a Confederate military prison notorious for the brutal treatment of inmates.