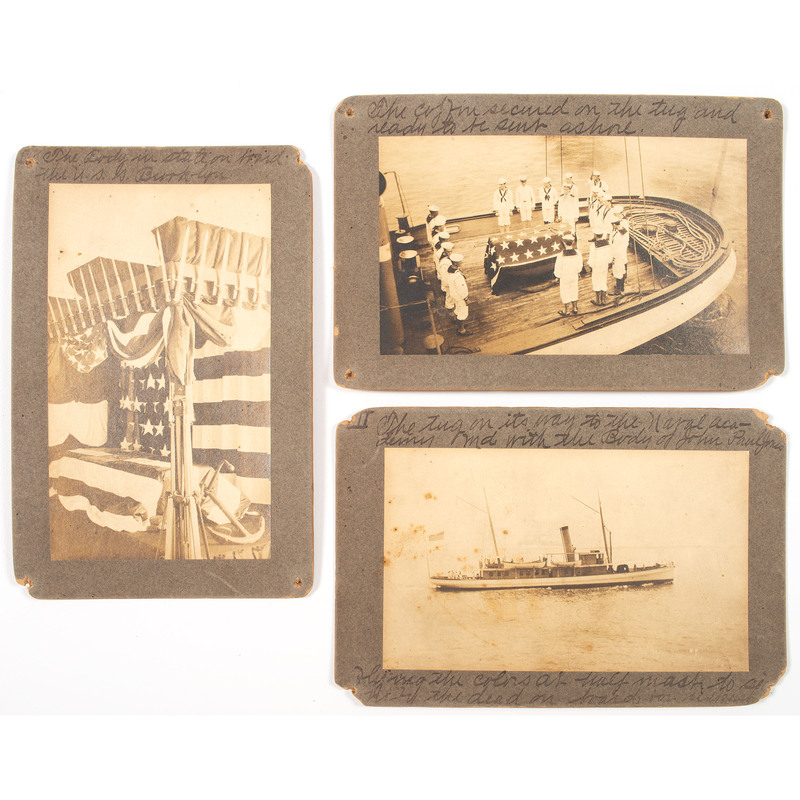 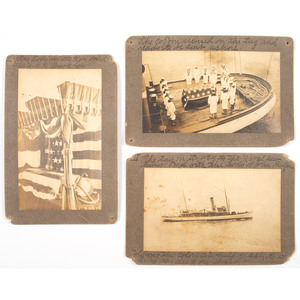 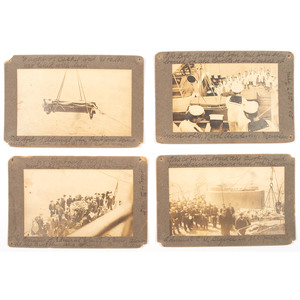 Lot of 7 silver gelatin photographs, 3.125 x 5.5 in., on 4.5 x 6.5 in. mounts. All with manuscript descriptions in margins. The photographs were taken by Hal T. Morrison, an electrician aboard the USS Brooklyn when she carried the remains of John Paul Jones back to the United States. It is thought that the descriptions are Morrison's, also.

"At Cherbourg, France / Memorial funeral of Ad. John "Paul" Jones / July 4th, 1905 / The remains of Admiral "John Paul Jones," along side the Brooklyn on a French torpedo boat."

"Weight of Casket was 1,100 lbs / was lined with lead / The body of Admiral John Paul Jones being hoisted on board the U.S.S. Brooklyn."

"The coffin on board the Brooklyn and funeral services being read over the remains / Admiral C.D. Sigsbee in the foreground"

"The body in state on board the U.S.S. Brooklyn."

"The Body of Admiral John Paul Jones being lowered on the Tug to be sent ashore at / Annapolis, Naval Academy, Maryland / July 23rd, 1905"

"The tug on its way to the Naval Academy Md with the body of John Paul Jones / Flying the colors at half mast to signal the dead on board for [illeg.]"

John Paul Jones had become the first naval "hero" in the American Revolutionary War. Although he had a rough start in life, he seemed to be a "natural" fighting sailor, and his exploits seemed to serve as inspiration for the establishment of a permanent American Navy rather than just hiring privateers as needed. After the end of the Revolutionary war, he seemed to have trouble finding relevancy. He served in the Russian Navy, but not to the effect he had had serving America.

When he left the Russian Navy, he went to Paris where his pension from Russia allowed him to retire. His health began to fail, apparently a result of kidney failure. Reportedly a couple weeks before he died, his feet began to swell, then his legs, working up the body until he could barely breathe (interstitial nephritis was cause of death). He died in his 3rd floor Paris apartment on July 18, 1792, just 45 years of age.

He was a native of Scotland, but had moved to the North American colonies - later the United States - and after the American navy disbanded at the end of the war, he was apparently forgotten. A French politician, M. Pierre Francois Simonneau, was determined that Jones receive a funeral befitting his status. He arranged for the body to be preserved in alcohol and interred in a lead coffin, believing that one day the United States would come for Jones. He was buried in the Protestant cemetery of St. Louis, which the following year was closed.

An attempt was made in 1859 by Charles Read to locate Jones, but he gave up after a year of searching. Unfortunately, many of the burial records were destroyed in the French Revolution, then underway. In 1897, Civil War officer, Horace Porter, by this time the American ambassador to France, decided to resume the search. Working back through secondary documents, Porter became determined that Jones was in St. Louis cemetery, but they were having some trouble locating the old site. Using old maps of the city from the National Library, the cemetery was located. Porter wired Theodore Roosevelt, suggesting that he thought they could locate the Admiral for about $35,000. Roosevelt took the proposal to Congress, who, true to form, then adjourned. Porter was afraid the offer on the land might be withdrawn before Congress got around to the proposal, so he began the project with his own funds.

Porter hired workmen to tunnel in what had been the old cemetery. Lead-lined coffins were relatively rare. The third one located turned out to be the correct coffin. Jones was taken to the famous Paris Medical School and given a full investigation, using all (what we would call forensic) techniques available in the day. The autopsy was undertaken by doctors and anthropologists, and Jones positively identified, primarily by anthropometrics. A bust that had been made of Jones in life was available to match with the remains. The doctors then determined the cause of death.

There were ceremonies in France, ceremonies on board the U.S.S. Brooklyn, sent to return him to the United States, ceremonies at Annapolis. After more than a century, John Paul Jones was reinterred at the Naval Academy where he remains to this day, his sarcophagus viewed by tens of thousands of visitors each year.

Mounts with tack holes in all corners. Some of the ink fading and difficult to read.