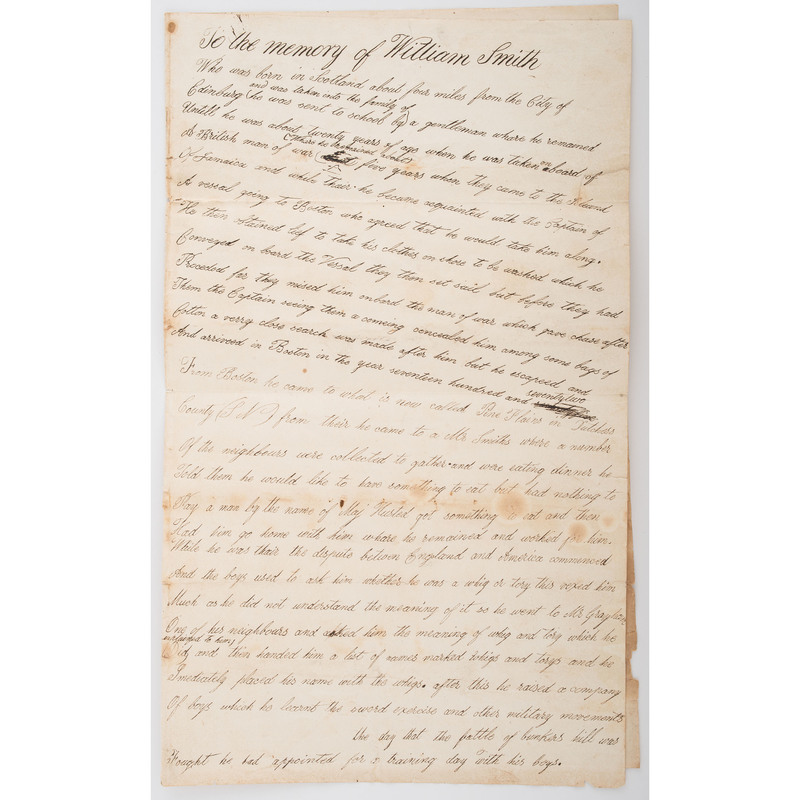 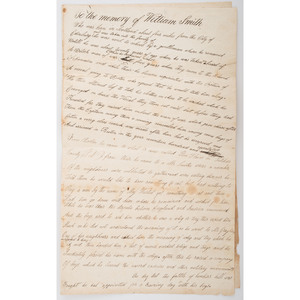 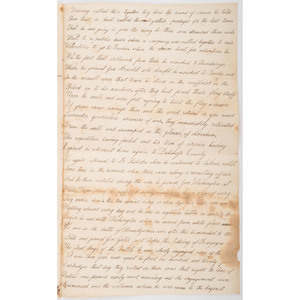 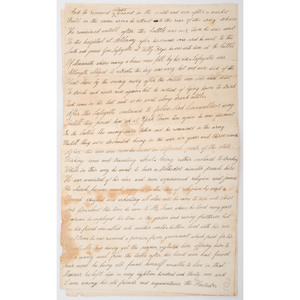 Manuscript memorial for a Revolutionary War soldier, 7.5 x 12.5 in., 3pp. Memorial begins, "To the memory of William Smith Who was born in Scotland about four miles from the City of Edinburg [sic] and was taken into the family of (he was sent to school by) a gentleman whare [sic] he remained Untill [sic] he was about twenty years of age when he was taken on board of A British man of war (Where he remained about) five years when they came to the Island of Jamaica and while thair [sic] he became acquainted with the Captain of A vessal [sic] going to Boston who agreed that he would take him along." The memorial continues to detail how William escaped and arrived on his own in Boston in 1722, and ended up in Pine Plains in Dutchess County, New York working for a "Maj Husted" in exchange for room and board at his home.

When the conflict broke out between England and America, William, after declaring himself a Whig, raised a company of boys to whom he taught in the art of "the sword exercise and other military movements." William then joined the cause as a volunteer and marched under General Arnold to Quebec where he saw much bloodshed and retreated with his fellow soldiers. After returning to Major Husted's home for a while, he was recruited to enlist and served under General Washington at White Plains, enduring as many as eighteen battles in twenty-three days. William then served in the Battle of Brandywine and joined General Gates just before the taking of Burgoyne at the Battle of Saratoga. During the battle, "the collumn [sic] where he was came to the beyonet [sic] And he receaved [sic] a slight wound in the wrist and soon after a mustket Ball in the same arm." William was transported to the hospital at Albany for treatment of his wounds, and soon after recovering he went south to join General Lafayette at Valley Forge and fought at the Battle of Monmouth. William was able to survive the heat (which many men died of) by collecting water in his hat and drinking small amounts as he went along.

William continued under Lafayette, who "continued to follow Lord Cornwallis's army Untill [sic] they pened [sic] him up at York Town..." William remained with his fellow soldiers until they were disbanded, having spent six years and three months in their service. William soon turned to heavy drinking, but after hearing the preaching of a Methodist minister, he turned from his sinful ways and dedicated himself to the "caus [sic] of religion." He then met a man by the name of Mr. Rows, with whom he lived for a number of years, peacefully employing his time in the garden "and raising fruittrees [sic]" until Mr. Rows died. Suffering poor treatment and a lack of funds under Mr. Row's son, William left in 1831 to returned to the Husted estate.

The memorial ends at this point, leaving us without answers about William's life and whereabouts after 1831. A search into early residents of Dutchess County, New York, however did return a possible identification for the "Maj Husted" mentioned in the memorial: Major Ebenezer Husted, who bought a tract of two hundred acres in Stanford, Dutchess County, New York, in 1766.

Memorial with spotting, discoloration, some surface soil, and brittleness including some rips and tears at edges. Creased from folding.