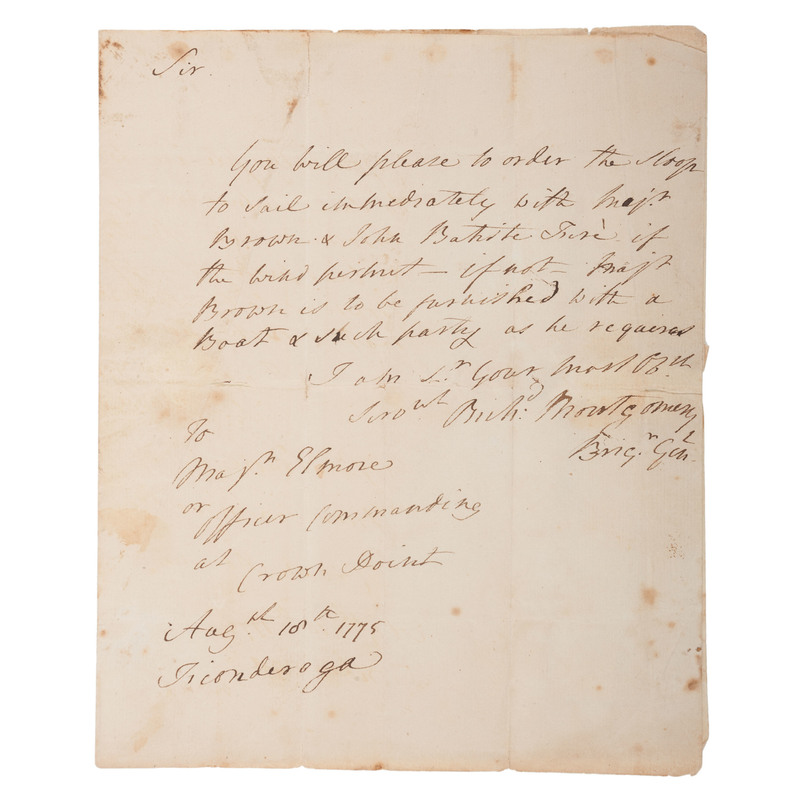 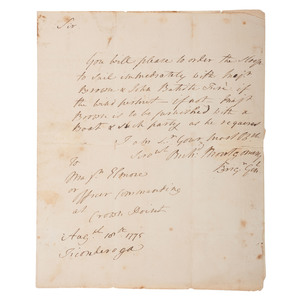 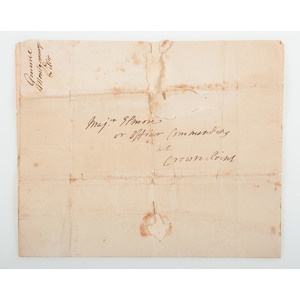 You will please to order the sloop to sail immediately with Majr. Brown & John Baptiste Fere(?) if the wind permit - if not - Majr. Brown is to be furnished with a boat & such party as he requires. I am Sr. Your most obt. Srvt. Richd. Montgomery, Brig. Genl.

After the appointment of George Washington to lead the Continental Army, Congress commissioned Philip Schuyler as Major General and Richard Montgomery as a Brigadier and deputy to Schuyler. The two were given the goal of invading Canada. Troops began assembling at Fort Ticonderoga.

Schuyler decided to petition the Six Nations (Iroquois) to remain neutral during the military operations. On 27 August 1775, Schuyler wrote to George Washington: "I left Ticonderoga on thursday the 17th Instant and hoped to have returned in four days, but on my arrival at Saratoga I received Information that a large body of Indians of the Six nations were to be here as on tuesday last, And that my presence was Indispensibly necessary....

"I thank your Excellency for the honor you have done me in communicating me your plan for an Expedition Into Canada. The Inclosed Information of Fere's which Corroborates not only the Information of Major Brown, that Contained in the two Affiidavits of Duguid & Sharford, but Every other we have had leaves not a trace of doubt on my mind as to the propriety of going into Canada... And I have Accordingly since my Arrival here, requested Gen: Montgomery to get every thing in the best readiness he could, for that I would move Immediately...."

Clearly this communication is part of that process, as Montgomery is getting Fere and Brown in place. This note was written the day after Schuyler left for Saratoga. Brown had been spying in Canada, and on September 17th with 80 men he attacked Fort St. John, but was driven back. He had, however, destroyed a key bridge and captured supplies intended for the fort, so it was not totally unsuccessful. A month later, with a larger force that included 300 Canadians, Brown laid siege to Fort Chambly. The second action was successful, and Fort St. John followed shortly after.

The Americans then attacked Montreal and it, too, fell. The Continentals then turned their attention to Quebec, but it was getting late in the year, the army was ill-prepared for winter, and many men returned home to wait for better conditions. Many more had enlistments that expired in the new year. So on New Year's Eve, December 31, Brown made a diversionary attack on the upper city while Montgomery, along with Benedict Arnold, attacked the lower town. Montgomery was killed in the first volley from the walled town. Arnold was wounded, Brown failed, handing the Continentals their first major defeat of the Revolutionary War.

John Brown of Pittsfield (1744-1780) was also a Massachusetts judge and legislator, as well as an Army officer. He participated later in Burgoyne's invasion of the United States. He later was the first to bring charges against Benedict Arnold.

Richard Montgomery (1736-1775) was born in Ireland. After attending Trinity College, where he earned a reputation as being very studious, spending much of his time in the library. He enlisted in the British army after Trinity, and came with his regiment to North America during the French and Indian War. He returned to England in 1765, but after leaving service in 1772, he came to America to settle.