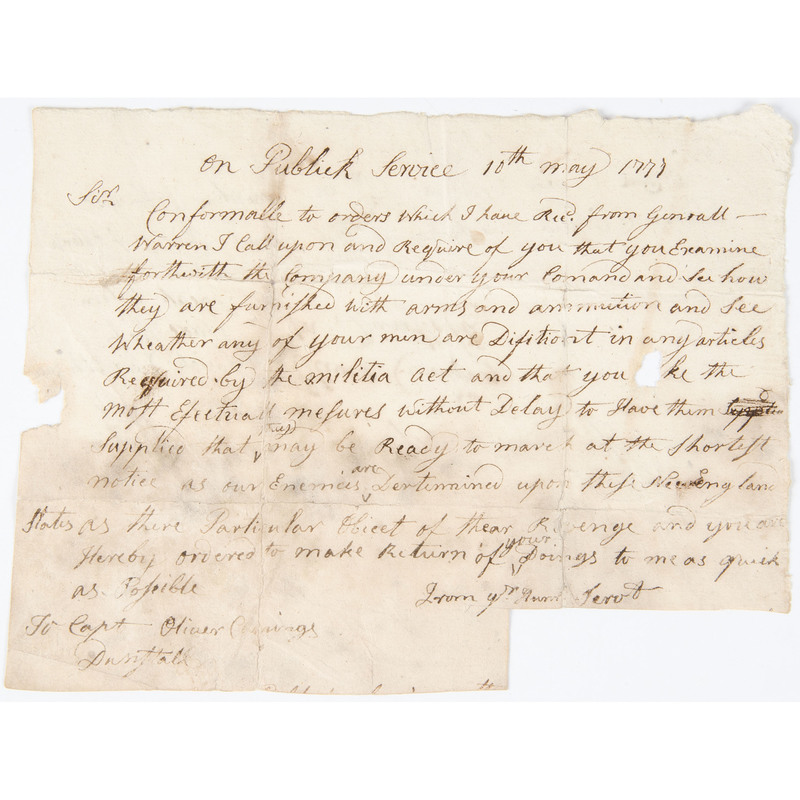 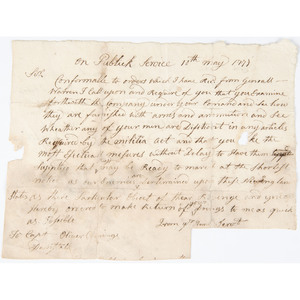 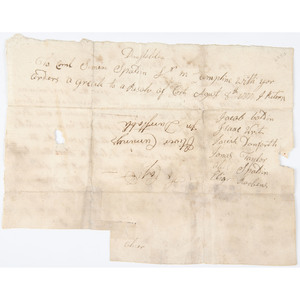 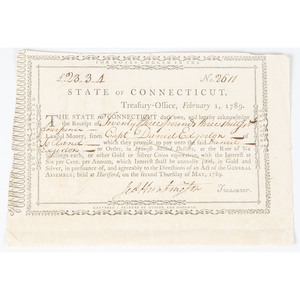 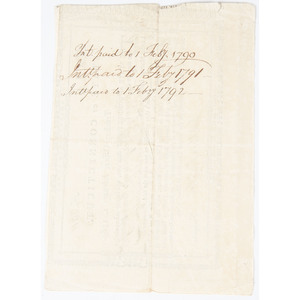 State of Connecticut Treasury Office pay order, 1p (5 x 7 in.), to Capt. Daniel Edgerton for 23 pounds, 3 shillings, 4 pence. Signed Jed. Huntington (1743-1818). Not dated, but printed part notes that these terms were approved by "Directions of an Act of the General Assembly, held at Hartford, on the second Thursday of May, 1789," thus it dates to the eight-month period between June 1789 and January 1790 (see below). Interestingly, the debt could be pay several ways, in pounds/shillings/pence, or "in Spanish Milled Dollars, at the Rate of Six shillings each, or other Gold or Silver Coins equivalent, with the Interest at Six per Cent. per Annum, which Interest shall be annually paid, in Gold and Silver...." On verso are dockets of three of these interest payments, for (Feb.) 1790, 1791 and 1792. The infant nation finally set the US dollar as a standard for the entire country in April 1792.

(Warren, James, General Revolutionary War)(1726-1808). AD(S), May 10, 1777, while on "Publick Service." 1page note to Capt. Oliver Cummings, Dunstable. The document exhorts him to "Examine forthwith the Company under your Comand [sic] and see how they are furnished with arms and ammunition and see wheather[sic] any of your men are difitiont [sic - difficient] in any articles Required by the militia act and that you [ma?]ke the most efectual [sic] me[a]sures without Delay to give them Supplice [sic - Supplies] that they may be Ready to move at the shortest notice...." Signature clipped.

Jedediah Huntington has been described as a slightly built intellectual who graduated from Harvard in 1763 with honor and earned a master's from Yale in 1770. General Washington's first recommendation to promote Huntington to brigadier was declined because there were already a number from Connecticut. But apparently the Commander in Chief insisted and Huntington was promoted a couple months later, in May 1777. He served throughout the war, spending the winter of 1777-1778 with Washington at Valley Forge. At the end of the war, he was part of the committee which formed the Society of Cincinnatus. He returned to Connecticut to resume his pre-war business, and went on to serve as county sheriff, state treasurer and delegate to the (US) Constitutional Convention. Washington appointed him collector of customs at New London (CT), a position he held until just shortly before his death.

James Warren has been described as one of those few men who was in his own right an influential politician, but is less well-known than his wife, Mercy Otis Warren. Both James and Mercy were Mayflower descendants, and he lived in Plymouth from birth until death. He also was a Harvard graduate (1745) and became sheriff of Plymouth County, MA. Warren became a critic of British policies toward the "colonies" after the passage of the Stamp Act. He became a member of the Sons of Liberty. In 1775, he became the third (and last) President of the Massachusetts Provincial Congress (basically state governor). He later served as Paymaster General of the Continental Army and worked closely with the Commander in Chief throughout the war. Mercy wrote poetry intended to support the revolutionary cause. She eventually published books of poetry, a couple of plays and a history of the Revolution, all under her own name with her husband's support. After the war, both became anti-Federalists, opposing the Constitution as it was constructed, putting James at odds with men who had been his friends for many years, including Samuel Adams and John Hancock, by then, the first governor of Massachusetts.

Second: A few holes, such as in "make" (or possibly "take") (effectual measures), chipped with some toning and scuffing along old folds.